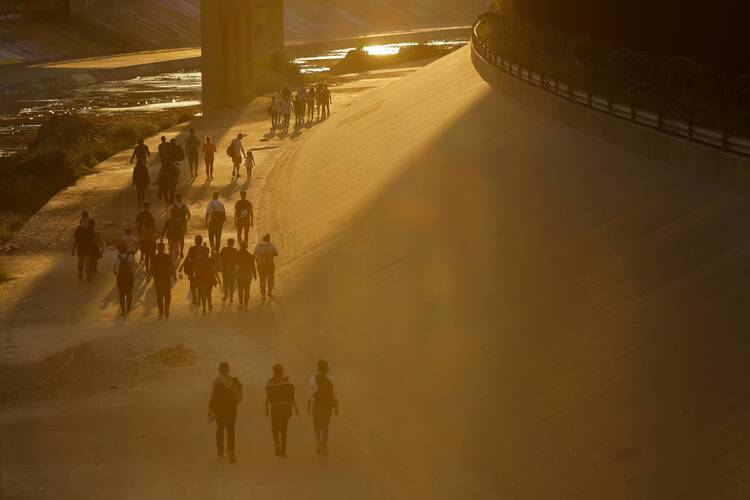 About two weeks ago, Customs and Border Protection agents—overwhelmed with the influx of asylum seekers—began dropping them off at the Greyhound Station and the surrounding area in downtown El Paso, Tex. Once there, many asylum seekers did not know what to do next.

The bus station is just a few blocks from Sacred Heart Church, a parish run by the Jesuits in the Segundo Barrio—a National Historic District and one of the poorest areas in the United States. Once parishioners heard of the migrants' needs, the parish quickly organized to support the men, women and children who had been stranded at the station. The first step was to open the old school gym showers to the weary travelers, many of whom had been unable to bathe for days.

“We’ve been ministering to immigrants since the parish was founded,” said Rafael García, S.J., pastor of Sacred Heart. This is simply the most recent example of that ministry, he said.

With surrounding shelters at full capacity, Father García’s parish opened the gym’s doors from 9 a.m. to 6 p.m., offering a place to wash up and rest, and a change of clothes and food. When he put out a call for towels, toiletries, soap, shoes and clothes, parishioners responded. Many parishioners, including those who struggle economically, volunteered their time to welcome the migrants.

“What we were doing was meeting a very specific need, because we’re right here, four blocks from the bridge [that crosses the border],” he said. “The buses were leaving people in our general area, and by word of mouth, people would communicate with one another, telling them that they can come here.”

Many of those who came to the parish already had bus tickets out of town, while others planned to stay a few days before departing, Father García said. Some even found work as day laborers to afford a ticket out of El Paso.

The recent, widely reported uptick in migrants is due in part to the end of the Migrant Protection Protocols, a policy that enabled immigration officials to send asylum seekers back to Mexico to wait for their cases to be heard, according to Dylan Corbett, executive director of the Hope Border Institute. Yet even with M.P.P. gone, border officials still utilize Title 42, a health ordinance put into place during the Covid-19 pandemic to summarily expel migrants back to Mexico.

When it comes to Venezuelan nationals, the U.S. government does not have an agreement with either Mexico or Venezuela to return asylum seekers to those countries, Mr. Corbett said. As a result, immigration officials must process their applications and allow them to await their asylum court date within the United States.

"Venezuela is [the origin of] one of the largest flows of migrants in the world today."

“A lot of people forget, but Venezuela is [the origin of] one of the largest flows of migrants in the world today,” he said. “It’s been like that for a couple of years. I think people have forgotten about it. But there’s still a tremendous amount of people leaving Venezuela because of the conditions there.”

In 2020, Nicolas Maduro took control of all branches of the Venezuelan government. His regime has been accused of numerous human rights abuses, including arbitrary killing, torture and life-threatening prison conditions. The country is beset by crime, kidnapping and civil unrest, according to the U.S. Department of State.

Mr. Corbett said some of the recent influx from Venezuela could be related to confusion about Temporary Protected Status for the country. This summer, the Department of Homeland Security extended T.P.S. for Venezuelans for 18 months, but the extension does not apply to recent arrivals.

Along with an overall increase that tends to happen this time of year, he said the U.S. government appears to be processing a higher rate of asylum seekers into the country.

In El Paso, Mr. Corbett said, Annunciation House, which had been a coordinator for most shelter work in the area, had recently cut back its operations. The city’s overall capacity decreased, too, and that also contributed to people being released into the streets.

Father García said two other parishes in the area consistently operate shelters for migrants—St. Ignatius and St. Francis Xavier, both of which were previously run by the Jesuits. For its part, the Diocese of El Paso operates a migrant shelter that can host around 50 migrants, according to Fernando Cenciceros, the diocesan communications director.

“We’re always looking for volunteers,” he said. “We have many coming, but the more the better.”

“We’re always looking for volunteers,” he said. “We have many coming, but the more the better.” Mr. Ceniceros noted that while the city has captured headlines lately, welcoming migrants is nothing new to the community.

Father García said that his parish stopped offering showers on Sept. 22, after the city and country announced it would open a larger location near the local airport. That center will care for migrants arriving in the area and connect them with family. The city and county governments are also now transporting migrants from the border toward the cities in the interior, and they will be reimbursed by the federal government.

“We don’t see people walking around anymore,” Father García said. “The shelter down the street from us, they only have a handful of people from Venezuela. A week ago, they were turning people away.”

Of the Venezuela migrants themselves, Father García said they had been traveling about 30 days before arriving in El Paso. They recounted harrowing stories of “El Tapón del Darien,” the dangerous jungle region of Panama that migrants traveling on foot from South America have to traverse on their journey north.

“These are the ones that make it,” Father García said. “The sad stories—and this is something that pretty much all of them talked about—are of the many corpses in that area they reported seeing. Some said they came across decomposing bodies—women, children, men. I think that was one of the harder things for them to fathom on the trip.”

Father García and Daniel Mora, S.J. also celebrate Masses on Sundays at Fort Bliss, the nearby site of a tent city for migrant children. Attendance at Mass can range from 25 to 150 children from Central America, mostly from Guatemala.

Unlike most Central Americans, he said, a number of those arriving from Venezuela bring money with them or receive it through wire transfer. Sacred Heart also helped a family of five with transport to Atlanta to meet their family there. Some Venezuelas, though, come to the United States without having family here.

The Jesuits at Sacred Heart are also part of the Encuentro Project, a collaborative effort in El Paso that organizes border experiences for visiting groups. Father García said the project had welcomed around 45 groups thus far.

“To see all these people coming with kids, to make the decision to do that journey, it shows that they really are hurting,” Father García said. “For years, I’ve been working with people from Mexico and Central America. But this is a new flow.”