In a post-Dobbs world, abortion rights activists are erasing pro-life Christians of color 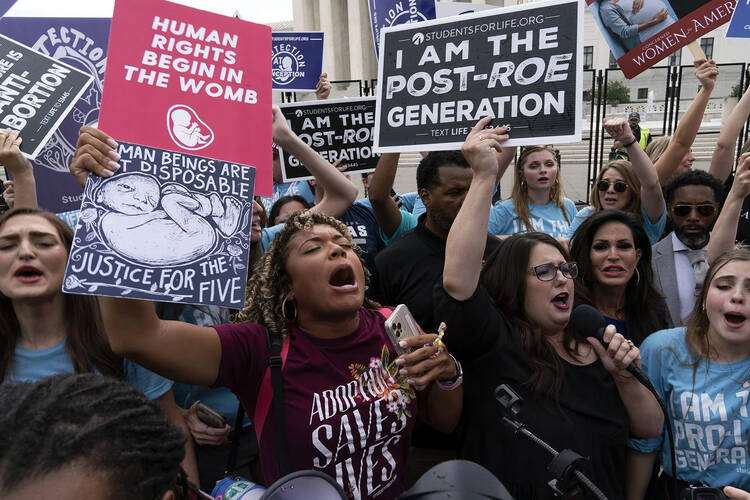 Of course, pro-lifers know the truth is precisely the opposite. For more than a century, abortion has been embedded in U.S. culture explicitly as a tool of racist eugenics. Structural racism has long landed abortion clinics disproportionately in communities of color, devastating their populations, and the legacy of the Roe era for women of color has been to coerce many of them into having abortions they don’t want.

The result is a fact so shocking that in 2015 Politifact felt the need to investigate it when it was floated during a presidential debate: “More black babies are aborted in NYC than born.” (Politifact rated it “true.”)

Pro-life voices of color have been ignored, however, and even intentionally erased, by a narrative that breezily associates anti-abortion activism and policies with racism.

Many of us have learned about these facts from pro-life Christians of color—especially pro-life women of color. I’ve been particularly influenced by Harvard University’s Jacqueline Rivers; Dr. Monique Wubbenhorst, an OB-GYN, global health expert and senior public policy fellow at Notre Dame’s de Nicola Center for Ethics and Culture; Gloria Purvis, a podcaster with America Media; and Louisiana state Sen. Katrina Jackson.

These and other pro-life voices of color have been ignored, however, and even intentionally erased, by a narrative that breezily associates anti-abortion activism and policies with racism.

Elaine Riddick, a longtime pro-life Christian activist of color, started her fight for human rights after she became pregnant as a result of a rape when she was 13 years old. Realizing years later that doctors at a state hospital delivering the child sterilized her without her knowledge, she made the connection between the racist eugenics that ended her ability to have children and the killing of Black children via abortion.

Even our trusted chroniclers of public opinion seem to be supporting the narrative that to be of color equates with support for legal abortion.

She has worked against abortion for decades and vigorously celebrated with friends the recent Supreme Court ruling in Dobbs v. Jackson Women’s Health Organization that overturned Roe. Yet a July 24 Washington Post feature story on her twisted her statement that “women should have control of their reproductive health” to paint her as a supporter of legal abortion.

“I think a woman should have control of her body,” she told the Post, arguing that, post-Dobbs, racist eugenic forces may return to forced sterilizations. “I didn’t have control of my body, and I have been devastated since I found out that this is what happened to me. I never had the chance to say yes or no.”

When I spoke with Riddick recently, she was still understandably full of righteous anger at how the Post had blurred her story to make it seem as if she promoted something she’s bravely stood against her entire life. She has demanded that the Post publish her letter to the editor exposing what happened, but so far the paper has only a posted a “clarification” and adjusted the headline.

Even our trusted chroniclers of public opinion seem to be supporting the narrative that to be of color equates with support for legal abortion.

Only 10% of people of color want to see abortion illegal in all cases, a drop of 13 percentage points in a single year.

The research firm Gallup, for instance, has found for the last several years that people of color are more supportive of restricting abortion than are whites. From 2018 to 2021, the share of “Total Hispanic or non-White Americans” who wanted abortion to be illegal in all cases hovered in the low- to mid-20% range. Whites in the same period opposed abortion in all cases at a rate of 16% to 19%.

But as the Dobbs decision came into view, Gallup appears to have removed its year-by-year data from the relevant webpage, replacing it with only its survey from 2022—in which only 10% of people of color want to see abortion illegal in all cases, a drop of 13 percentage points in a single year. (One can still find the original webpage via the Wayback Machine.)

The sudden decline has caused some, including Catholic University quantitative sociologist Michael New, to raise questions about Gallup’s data. But even if one takes the 2022 data at face value, the narrative embraced by so many in academia and major media still ignores a very significant part of the Black and brown population that believes in prenatal justice.

Those of us who identify as being on the side of social justice regularly talk about amplifying “the missing voices.” When it comes to the abortion debate, the voices that are most obviously missing increasingly belong to pro-life Christians of color. We should be amplifying those voices, no matter our stand on abortion.

Correction: An earlier headline on this article misstated that “anti-abortion activists” are erasing pro-life Christians of color.