‘Beyond Bad Apples’: A new report explores how clericalism is shaped by sex, gender and power 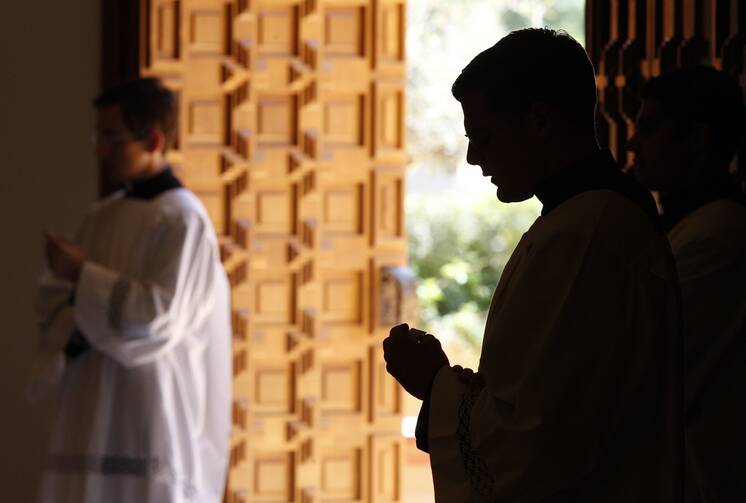 A Legionaries of Christ seminarian is silhouetted as he attends a Mass in the chapel of Regina Apostolorum University in Rome in this June 7, 2013, file photo. (CNS photo/Paul Haring)

A new report explores how a culture of clericalism contributes to the cover-up of sexual abuse by clergy in the Catholic Church. The study reveals a widespread belief among church personnel that a repression of sexuality, unhealthy power dynamics in Catholic settings and dated views on gender among church leaders foster a culture in which speaking up about wrongdoings is difficult.

The report, “‘Beyond Bad Apples’: Understanding Clergy Perpetrated Sexual Abuse as a Structural Problem & Cultivating Strategies for Change,” was researched and written by two professors at the Jesuit-sponsored Santa Clara University, Julie Hanlon Rubio and Paul J. Schutz. Dr. Rubio, who teaches Christian ethics at the Jesuit School of Theology of Santa Clara University in Berkeley, and Dr. Schutz, a teacher in the university’s religious studies department, interviewed hundreds of priests, members of religious communities and lay people working in the church to gather insight about the church’s culture and offer ideas for priests and laypeople to reduce a culture of clericalism.

“For many people, the concept of clericalism is familiar, it’s something they’ve heard about and yet we don’t have a common understanding of it.” Dr. Rubio told America. “We really do think that most people’s understanding is that it is pretty individual.”

Clericalism, the report argues, is a systemic issue that creates unhealthy environments in the church, and not a phenomenon unique to certain bad actors.

Clericalism, the report argues, is a systemic issue that creates unhealthy environments in the church, and not a phenomenon unique to certain bad actors.

A number of Catholic researchers have argued for years that a culture of clericalism perpetuated abuse. More recently, church leaders from Pope Francis to diocesan parish priests have publicly agreed with that sentiment. In 2018, the pope said clericalism had allowed abuse and its cover-up to flourish in the church.

But the new report seeks to highlight how clericalism exists as a system that harms even individual actors in the church who would describe themselves as being opposed to it.

“Rather than describing clericalism as an individual reality—a problem of ‘bad apples’—this study maps clericalism as a structural reality shaped by the interaction of three forces: sex, gender, and power,” the authors write.

Several contemporary and historical realities contribute to a culture of clericalism in the church, the report contends, which is exacerbated by a lack of opportunities for priests to discuss sexuality, the setting apart of priests from the laity and little professional interaction between seminarians and lay women.

The report notes that lay people and priests can both perpetuate clericalism in the church, and that understanding how clericalism contributes to an environment where sexual abuse is covered up “need not oppose priesthood nor demonize priests.”

The new report seeks to highlight how clericalism exists as a system that harms even individual actors in the church who would describe themselves as being opposed to it.

The researchers interviewed about 300 people for the report, including priests, members of religious communities and lay Catholics. Nearly half the respondents were laypeople and the report notes that no diocesan seminarians participated. The report found that respondents who had received Jesuit training felt more prepared to confront the challenges of ministering within a culture of clericalism. Still, all respondents agreed that systems exist in the church that make ending abuse difficult.

About 40 percent of priests and men in formation for the priesthood took part in the study identified as homosexual, far higher than the general population. The report cites studies showing that homosexuality is not a root cause for the church’s abuse crisis, but notes that the church’s teaching against homosexuality creates a culture of secrecy among priests who identify as gay.

“The concentration of gay men in the priesthood cannot be overlooked because most priests are not able to be open about their sexual orientation,” the report states, “and some may consciously or unconsciously seek out priesthood as a way of avoiding or repressing their sexuality, making healthy celibacy extraordinarily difficult.”

A culture of silence around the reality of gay priests, in addition to “widespread sexual repression” and a lack of understanding about gender, creates conditions where secrecy and protecting the institution become primary concerns.

To combat that culture, the new report suggests Catholics adopt “anti-clericalism” attitudes and practices. Those would be based on promoting healthy sexual integration for celibate priests, holding up positive examples of masculinity and femininity and empowering the laity to work alongside ordained clergy.

“When male clergy choose secrecy over exposure, they are protecting male spaces of knowledge and power,” the report states.

“Just as networks enable men in entertainment, sports and politics to protect male power and privilege while disadvantaging their female colleagues, clerical networks protect men who abuse both minors and adults,” the report finds.

When it comes to dealing with their sexuality, about half of priests who took part in the survey said “repression or sublimation were presented to them as strategies.” Just half of the priests and those studying to become priests said they felt they were given “the tools they needed for living a celibate life without denying their sexuality.”

The survey also found many priests and deacons who participated felt they were open to feedback but the lay respondents said they did not feel comfortable offering critiques on things like preaching. That dynamic, the authors said, “often shields clergy from criticism and maintains a status quo characterized by silence.”

The report, which was funded with a grant from Fordham University as part of an initiative to confront sexual abuse at Jesuit institutions, says that all Catholics have a role to play in changing the culture of the church in order to prevent clergy sexual abuse and its cover-up.

Dr. Rubio said that parishes and schools that rely solely on safe environment training are “missing the boat” when it comes to making church-affiliated institutions truly safe.

“This is a relational reality, a structural reality,” she said. “And part of the deal with structures is that they work on us even when we’re not aware of them and even when we don’t want to act a certain way.”

Instead, preventing abuse and its cover-up will take a concerted effort among priests, members of religious communities and laity to understand the root causes of why certain behaviors have been tolerated in these spaces.

Those ideas include creating spaces where priests and seminarians can have honest discussions about sexuality, clear understanding about appropriate boundaries between priests and adult lay people, opportunities to study gender, and empowering the laity.

“We hope these recommendations might assert some small influence on the formation of future priests, deacons and lay ministers, driving the Church away from the evils of structural clericalism and fostering new ways of being the Body of Christ that are consistent with the Gospel proclamation of life, love, and liberation for all God’s people,” the authors state.