Lessons from a Twitter hoax that claimed Pope Benedict had died 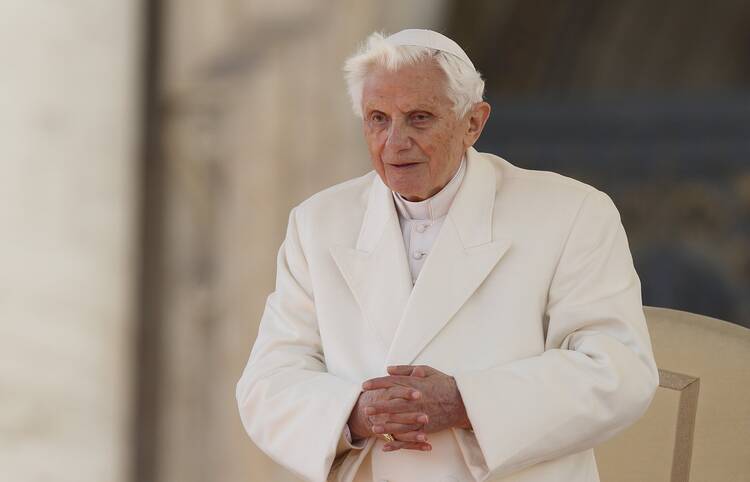 Pope Benedict XVI is pictured during his final general audience in St. Peter's Square at the Vatican in this Feb. 27, 2013, file photo. (CNS photo/Paul Haring)

No, Pope Emeritus Benedict XVI is not dead. No, Pope Francis is not resigning. And no, the Vatican is not hiding a secret time machine. You may have heard all of these stories repeated as breaking news—some of them in the past week—but if you scratched the surface, you soon found out they had no more credence than the fantasies of The Da Vinci Code or other old chestnuts, such as the claim the Jesuits sank the Titanic, shot Abraham Lincoln or created the Roswell space aliens. Fake news!

Many Catholic journalists last night found themselves startled (or awakened) by a buzzing phone or an exploding inbox because of “news” reported on Twitter: “Pope Emeritus Benedict XVI has died.” The account making the announcement (since deleted) was run by a notorious Twitter hoaxer who wasn’t even all that subtle about the account being fake; in fact, it’s not even the first time he’s faked a story about Benedict dying.

So why do we fall for it? (And we do—those discreetly deleting their retweets of the hoax included more than a few journalists.) Our need for speed has in many cases outstripped our commitment to veracity—and so we fact-check almost nothing. It takes just a few minutes to set up a Twitter account, and no time at all to start tweeting out misinformation, but these days there is not even much of a lag before someone who should know better retweets it for the clicks.

No, Pope Emeritus Benedict XVI is not dead. No, Pope Francis is not resigning. And no, the Vatican is not hiding a secret time machine.

It’s easy to blame this casual disregard for fact checking on Donald J. Trump and his factotums like Kellyanne Conway (she of the “alternative facts” approach to the truth), but the problem predates them by a fair margin. One famous example: The entertainer Bob Hope was at home eating breakfast one day in 1998 when he found out that he was dead. Representative Bob Stump of Arizona had announced Mr. Hope’s death on the floor of the House of Representatives in a speech carried live on C-Span.

It made for some great headlines. “Grave Error: Word Of Hope’s Death Greatly Exaggerated,” said The Washington Post. “A Comedy of Errors,” The Chicago Tribune called it. “Oops. Bob Hope Is Not Dead,” reported The New York Times. But The Los Angeles Times did it best: “Yes, America, There Is Still Hope.”

You can see the temptation for Mr. Stump. A senior Republican had seen a partially written Associated Press obituary for Mr. Hope that had been accidentally posted online and quickly removed (yes, reporters write the obituaries in advance), and handed it on to Mr. Stump without verification. Mr. Hope was of course very elderly (he would die in 2003 at the age of 100) and much beloved, a national figure. Why not be the first out of the gate to lament his passing? Well, other than the fact that it wasn’t true.

If our great-grandparents waited three months to hear the pope was dead, perhaps we can wait half a day.

Pope Emeritus Benedict XVI is 95 years old and clearly not in good health, and nine years have passed since he announced he was too frail to remain in office; it makes some sense that he would pass on soon. And Pope Francis is 85 and visibly struggling with his mobility; it makes some sense that he would retire someday soon. And both men are beloved by many and despised by quite a few. Either event would be quite the news story.

Other than the fact that, on further reflection, neither story is true.

I had a very wise professor many years ago for a class on the papacy in the 19th and 20th centuries who pointed out that when Pius X was elected pope in 1903, most American Catholics didn’t know. When they did find out there was a new pope, perhaps several months later, they wouldn’t necessarily have learned his name or much of his biography. Rome was far away and communication wasn’t easy or regular.

It can be a shock to a student of history to think that such a momentous figure in the modern church was more or less unknown to the world at large, but it imparts a valuable lesson: Swift and easy communication is mostly value-neutral, and the church and the world went right along living when it was impossible. We believe rapid communication as an obvious sign of progress, a vast improvement over the information deficits of past generations, but it only becomes a tool for good when it is handled humbly and responsibly.

I don’t want to go back to 1903; nor is it possible. But if our great-grandparents waited three months to hear the pope was dead, perhaps we can wait half a day.