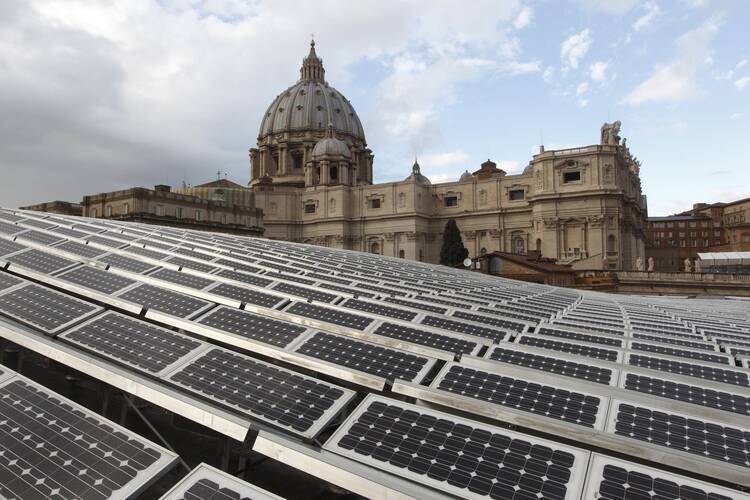 Solar panels are seen on the roof of the Paul VI audience hall at the Vatican in this Dec. 1, 2010, file photo. Installing “green rooftops” are one way for colleges to participate in the Laudato Si’ Action Platform. (CNS photo/Paul Haring)

Seven years ago on June 18, Pope Francis inspired the world with his sweeping encyclical, “Laudato Si’: On Care for Our Common Home.” The passionate encyclical focuses on the environment and our human relationship to it, and to each other. As the pope writes, “the earth herself, burdened and laid waste, is among the most abandoned and maltreated of our poor” (No. 2).

“Laudato Si’” reveals global ecological challenges that threaten our very existence. “We have forgotten that we ourselves are dust of the earth; our very bodies are made up of her elements, we breathe her air, and we receive life and refreshment from her waters,” Francis wrote in his introduction. The encyclical balances heartfelt calls for a fundamental re-evaluation of our place in the world with messages about concrete steps we must take to reverse the “extraordinary” effects of climate change and ecosystem damage that disproportionately impact the poor.

As the pope writes, “the earth herself, burdened and laid waste, is among the most abandoned and maltreated of our poor.”

We are now at a point where we all must mobilize. Our own institution, Loyola University Chicago, has prioritized environmental sustainability over the past 20 years in order to help make a just transition to clean energy and to build a more sustainable world. We have demonstrated our commitment to the environment with concrete steps such as incorporating sustainability classes across our curriculum, launching a new School of Environmental Sustainability, maximizing energy efficiency in campus buildings and creating more campus-wide “green rooftops” than any other college in the Midwest. Last October, our university also announced that it would divest from corporations that derive a majority of their revenue from fossil fuels.

Since the beginning of this century, we have reduced our greenhouse gas emissions by over 70 percent and have transitioned 100 percent of electricity consumed on all four Chicago-area campuses to clean, renewable solar-energy sources. Adding to all that, Loyola University Chicago will be carbon neutral by 2025. These are the types of concrete steps the pope is asking us all to take.

But more of us need to do more. That is why the Vatican launched a major environmental action initiative on Nov. 14, 2021, for Catholic families, parishes, dioceses, religious orders, schools, universities, hospitals and other organizations worldwide. The initiative is called the Laudato Si’ Action Platform, and it includes the 7-Year Journey Towards Integral Ecology, which directs both Catholic individuals and Catholic institutions around the world to take up new, transformative and nonviolent actions against environmental and social injustice. Under the auspices of the Dicastery for Promoting Integral Human Development, the Vatican has set a target of animating 280 million people—3.5 percent of the world’s population—into environmental action over the next seven years.

This is the time for universities to make changes to their own physical spaces, to decrease their carbon footprint and to become zero-carbon, zero-water institutions.

Catholic universities in particular are key players in this effort. We at Loyola are proud to be taking a leadership role within the Action Platform’s Universities Working Group. In these early months of the Action Platform, we have helped over 100 universities in 38 countries commit to Pope Francis’ 7-Year Journey—universities from Nairobi’s Hekima University and Sweden’s Newman Institute to Sanata Dharma University in Yogyakarta, Indonesia. With help from contributors from around the world, we have created the University Pathways website, a clear and inviting introduction to the Laudato Si’ Action Project and the 7-Year Journey.

This is a remarkable opportunity for any Catholic university to align its educational mission to the mission of the church, and to the deep aspirations of students around the world. But this is not solely a Catholic undertaking. Pope Francis invites all universities and all students, Catholic or non-Catholic, from anywhere in the world, to take up the Journey.

This is the time for universities to make changes to their own physical spaces, to decrease their carbon footprint and to become zero-carbon, zero-water institutions. This is also the time for them to join their local communities in parallel efforts: planting gardens, restoring land and supporting farmer’s markets. These and many more actions are part of the seven goals set out for the Journey in the Action Project and University Pathways.

Seven years ago, Pope Francis gave us a gift: his call in “Laudato Si’” to work toward a better tomorrow for all of the living things on this beautiful planet. Now, by making a commitment to his new 7-Year Journey initiative, all of us in higher education can take those stirring words and turn them into a greener, stronger grade of decisive actions. 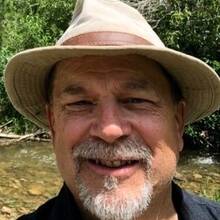 Michael Schuck is an ethics professor in the Department of Theology and the School of Environmental Sustainability at Loyola University Chicago. 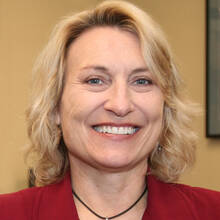 Nancy Tuchman is an ecologist and the founding dean of the School of Environmental Sustainability at Loyola University Chicago.