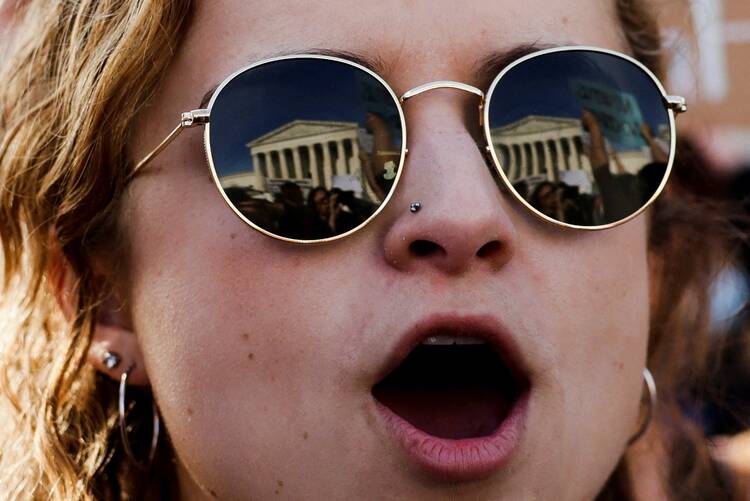 An abortion demonstrator in Washington is seen outside the U.S. Supreme Court May 3, 2022, after the leak of a draft opinion on the court's upcoming abortion ruling was published. (CNS photo/Evelyn Hockstein, Reuters)

Editor’s note: This article is part of The Conversation with America Media, offering diverse perspectives on important and contested issues in the life of the church. Read other views on abortion and the possible reversal of Roe v. Wade, as well as news coverage of the topic, here.

A large majority of U.S. adults—57 percent—want the Supreme Court to uphold Roe v. Wade, which legalized abortion nationwide in 1973, acccording to a Monmouth University poll released on May 11. Only 36 percent said they wanted the court to “revisit” the ruling. The poll of 807 U.S. adults was taken after the leak, on May 2, of a draft decision that suggests a majority of the court is ready to overturn Roe v. Wade outright.

But in the same poll, only 44 percent said Congress should “pass a law allowing abortions nationwide” if Roe is overturned. (Whether such a law is even constitutional would presumably be decided by, yes, the Supreme Court.) Most wanted Congress to either leave abortion law to the states (43 percent) or ban abortion nationwide (9 percent), neither of which would be possible if Roe is upheld.

Another confusing result from the poll: Though only 9 percent wanted a national ban, 33 percent of respondents said they would “not at all” be “bothered” by a national ban on abortion, with another 15 percent saying they would be bothered “a little.” It is possible that many respondents thought the question was about whether they would be personally affected by abortion law. “Bother” could mean anything from “slightly irritate” to “completely change one’s life,” though in any case the sizable number settling on “a little” is perplexing.

Confusing questions are endemic in public opinion surveys, but the topic of abortion is especially tricky for pollsters.

Confusing questions are endemic in public opinion surveys, but the topic of abortion, and a Supreme Court decision that has been interpreted a thousand different ways by legal experts over the past 50 years, is especially tricky for pollsters. A poll about a presidential election might have dozens of questions, but in the end, it comes down to “pick A or B,” and most respondents can answer without much hesitation. With abortion, there are so many nuances, so many moral considerations and so many hypothetical situations that the measures of public opinion can seem contradictory.

(There can be a temptation to stick to a binary framing anyway: In early May, the nonprofit Texas Observer news site headlined one story “78% of Texas voters think abortion should be allowed in some form, UT poll shows,” seemingly counterintuitive for such a Republican state; but casual readers may not have read enough of the story to learn that the 78 percent included 28 percent who agreed that “The law should permit abortion only in case of rape, incest or when the woman’s life is in danger.”)

The picture becomes even more muddled when one looks at the results from different pollsters over even a short period of time. As reported in the data analysis website FiveThirtyEight, the opposition to overturning Roe v. Wade was at 69 percent in a CNN poll conducted in January but only 50 percent in a Morning Consult/Politico poll taken right after the leak of the Supreme Court draft opinion. Was there less support for Roe v. Wade when people read more about it? Was it more significant that only 1 percent of respondents had “no opinion” on the matter in the earlier CNN poll, compared with 22 percent in the Morning Consult poll? Do CNN pollsters nudge people toward “pick A or B” answers?

Depending on how Congress and state governments respond, a reversal of Roe may not be as unpopular as recent polls suggest.

Another source of confusion is Roe’s differing definitions of abortion rights over the three trimesters of a pregnancy. In the first trimester, Roe does not allow any restrictions on abortion, and in the third, any restriction is allowed, including a total ban as long as it includes exceptions for the life and health of the mother. But what kind of regulations are permissible in the second trimester is a question that has tied up the court for decades. In practice, under the Roe and Casey precedents, any substantive regulation that restricts access to abortion has been met with a near-instant legal challenge, with its ultimate resolution depending on the Supreme Court. This is all hard to poll about because no one, including the Supreme Court justices, can reliably agree on what Roe and Casey do mean, much less what they should mean.

But it is significant that polls have consistently found that a majority of Americans favor tougher restrictions, or a total prohibition, on abortions in the second trimester of a pregnancy as opposed to the first trimester (as is the case in most of Western Europe), even when the same pollster finds majority support for Roe.

For example, a Gallup poll in 2018 found that 64 percent of U.S. adults were opposed to a reversal of Roe, but in another Gallup poll that same year, 65 percent said that abortions should “generally” be illegal after the first three months of a pregnancy. And in an AP-NORC poll conducted last year, 56 percent of U.S. adults said abortion should be legal in “all” or “most” cases, but 65 percent said that “all” or “most” abortions should be illegal in the second trimester. (Only 38 percent said most abortions should be illegal in the first trimester.) Agreement with the statement that abortion should be legal in “most” cases is commonly used to categorize people as “pro-choice,” but as the AP-NORC poll suggests, it can obscure disagreements with the legal standards set up by Roe.

When it comes to public opinion polls, as FiveThirtyEight’s Amelia Thomson-DeVeaux tweeted, “Support for Roe is a vague proxy for the idea that abortion should be available to some people, sometimes.” Depending on how Congress and state governments respond, a reversal of Roe may not be as unpopular as recent polls suggest.