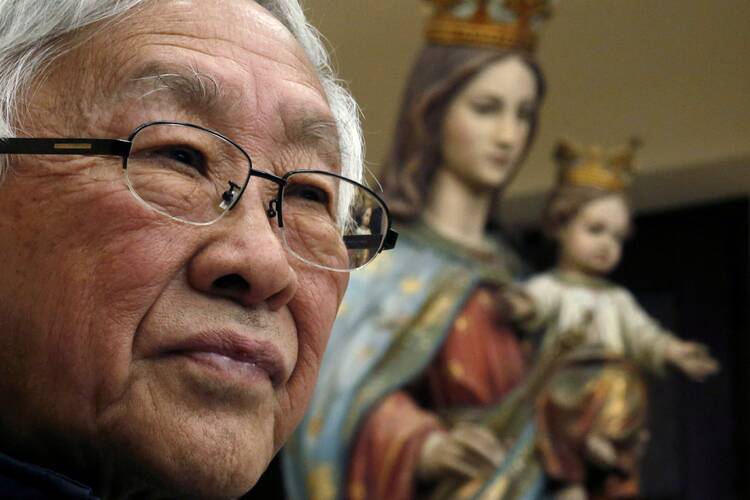 Cardinal Joseph Zen Ze-kiun, retired bishop of Hong Kong, attends an early February news conference in Hong Kong. For the first time in decades, all of the Catholic bishops in China are in full communion with the pope, the Vatican announced Sept. 22. (CNS photo/Bobby Yip, Reuters) See VATICAN-CHINA-BISHOPS Sept. 22, 2018.

The independent Hong Kong Free Press tweeted a photo of a masked Cardinal Zen and said: “Cardinal Joseph Zen was released on bail from Chai Wan Police Station at around 11 p.m. on Wednesday. He did not speak. He then entered a private car parked outside the police station. The 90-year-old was accompanied by five people when he left the police station.”

The 90-year-old cardinal has been an outspoken defender of human rights and democracy in Hong Kong and strongly critical of Beijing for its suppression of fundamental freedoms in the city.

The cardinal, who is in frail health, has been an outspoken defender of human rights and democracy in Hong Kong and strongly critical of Beijing for its suppression of fundamental freedoms and democracy in the city. Ever an advocate of nonviolence, Cardinal Zen was arrested today along with three others.

The South China Morning Post reported that the cardinal “has been arrested by Hong Kong’s national security police, along with former opposition lawmaker Margaret Ng Ngoi-yee and singer Denise Ho Wan-sze for allegedly colluding with foreign forces, according to sources.”

A fourth person, the former adjunct associate professor Hui Po Keung, was arrested by national security police on Tuesday as he was about to catch a flight to Germany, a source said.

The arrests were apparently related to their roles as trustees of the 612 Humanitarian Relief Fund, which provided legal aid to people who took part in 2019 pro-democracy protests that were quashed by security forces, the U.K.-based human rights group Hong Kong Watch said. The fund closed in 2021, it said.

Scores of pro-democracy activists have been arrested under a sweeping National Security Law imposed on the city by Beijing in 2020 following the demonstrations. Under the law, people arrested for colluding with foreign forces could be sent to China for trial if arrested and charged. The law made participating in or supporting the pro-democracy movement crimes of subversion and collusion with foreign organizations and allowed for those remanded to be extradited to mainland China. Punishment ranges between a minimum of three years and a maximum of life imprisonment. The city’s independent media have been gutted and its legislature reorganized to pack it with Beijing loyalists.

Responding to queries from journalists after the arrest, the Vatican spokesman Matteo Bruni said, “The Holy See has learned with concern the news of the arrest of Cardinal Zen and is following with extreme attention to the development of the situation.”

Charges against him are said to be related to the 612 Fund and allegedly colluding with foreign powers.

The 612 Humanitarian Relief Fund was established on June 15, 2019, and, according to its website, “aims to provide humanitarian and relevant financial support to persons who are injured, arrested, attacked, or threatened with violence” during pro-democracy protests. The website states that the fund “primarily provide[s] legal, medical, psychological and emergency financial assistance.”

Scores of pro-democracy activists have been arrested under a sweeping National Security Law imposed on the city by Beijing in 2020 following the demonstrations.

Cardinal Zen has publicly delivered detailed critiques of Beijing. He has been close to other high-profile dissidents, and as a pastor and even after resigning as bishop, he regularly visited protestors who were detained in Hong Kong prisons.

Beijing’s ire has also been raised by the cardinal’s ongoing critique of the Vatican’s controversial 2018 deal with China regarding the appointment of bishops, an attempt to end a fractious relationship that stretched back to the time of dictator Mao Zedong. Cardinal Zen said he was concerned the deal would “kill” the unofficial or underground church in China, whose leaders refuse to register with the state-run Chinese Catholic Patriotic Association.

The cardinal’s detention came months after a series of articles in state-run media attacking his activism. It also comes amid rising fears that Beijing would begin instituting closer control over the church in Hong Kong, in line with its central management of the church on the mainland.

Cardinal Zen has publicly delivered detailed critiques of Beijing. He has been close to other high-profile dissidents.

Beijing has a history of arresting and jailing priests and bishops, with a number still unaccounted for in recent decades.

Shortly after the new security law was implemented, Cardinal Zen said that while he would remain prudent, he was prepared to suffer arrest and trials under the new law.

“If right and proper words were considered against their law, I will endure all the suing, trials and arrests. Numerous predecessors have endured similarly,” he said in a video posted on his Facebook page.

The arrest comes three days after the election of John Lee Ka-chiu, a former police officer and a Catholic, as the new chief executive officer of Hong Kong, a move widely seen as a further important step by the Chinese government to tighten its grip on Hong Kong.

Material from the Associated Press and Catholic News Service was used in this report. This story will be updated.