Podcast: Pope Francis is ‘pessimistic’ about the possibility of peace in Ukraine 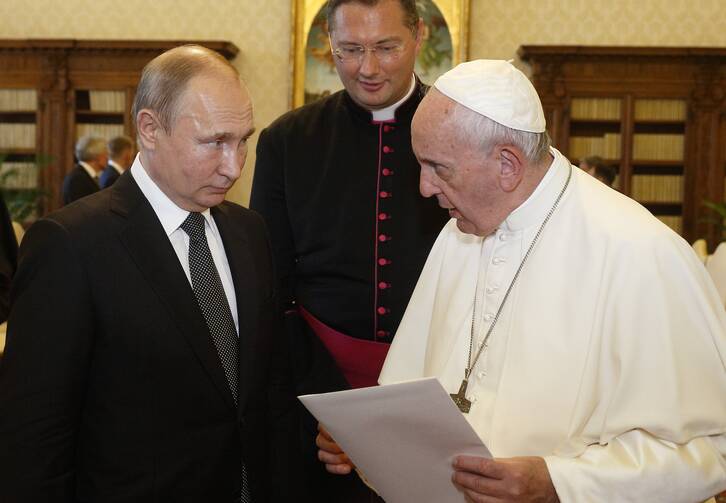 Father Visvaldas Kulbokas, center, serves as translator as Pope Francis and Russian President Vladimir Putin exchange gifts during a private audience at the Vatican in this July 4, 2019, file photo. In an interview with the Italian newspaper Corriere della Sera, published May 3, 2022, Pope Francis said he would like to go to Moscow to meet Vladimir Putin in an attempt to end the conflict in Ukraine. (CNS photo/Paul Haring)

In a new interview with the Italian daily newspaper Corriere della Sera, Pope Francis revealed some of the details of his communications with Russian Orthodox Patriarch Kirill and Hungarian Prime Minister Victor Orban. He also reflected on why he chose to appeal publicly to the Russian ambassador to the Holy See to end the war, rather than communicate privately with Russian President Vladimir Putin.

This week on “Inside the Vatican,” veteran Vatican correspondent Gerard O’Connell and host Colleen Dulle dig into the pope’s interview—and why he says he is pessimistic about the possibility of peace.

“There are none so deaf as those who do not want to hear,” Gerry says on this week’s show. “And it seems at this moment that the Kremlin does not want to listen to peace talk. They want victory; they want taking of territory…even if…as the Pope said, you put a flag on rubble and call it victory.”

Also on the show, Colleen gives an update on Pope Francis’ request that the Pontifical Council for the Protection of Minors produce an annual report on, in Francis’ words, “what the church is doing to protect minors and what needs to change.”

Pope Francis: ‘I am ready to go to Moscow’ to end the war in Ukraine