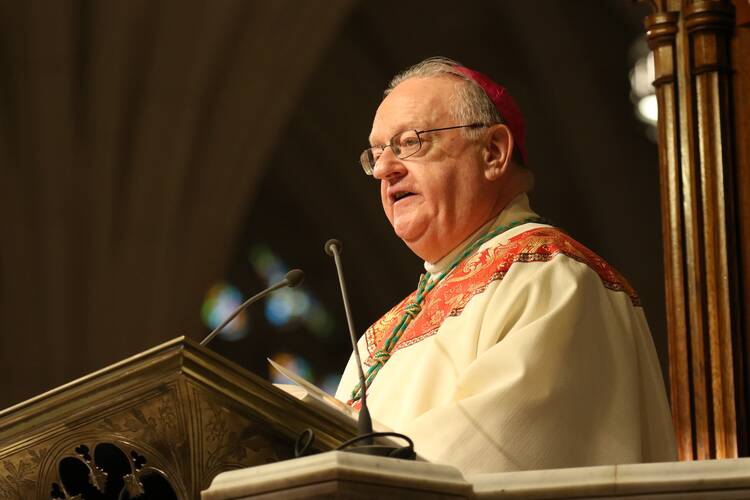 Bishop Dennis J. Sullivan of Camden, N.J., is seen delivering his homily during a Mass at St. Patrick's Cathedral in New York City in 2017. (CNS photo/Gregory A. Shemitz)

TRENTON, N.J. (AP) — A New Jersey Catholic diocese has agreed to pay $87.5 million to settle claims involving clergy sex abuse with some 300 alleged victims in one of the largest cash settlements involving the Catholic church in the United States.

The agreement between the Diocese of Camden, which encompasses six counties in southern New Jersey on the outskirts of Philadelphia, and plaintiffs was filed with U.S. Bankruptcy Court in Camden on Tuesday.

The settlement must still go before a U.S. bankruptcy judge. If approved, the settlement would exceed the nearly $85 million settlement in 2003 in the clergy abuse scandal in Boston, although it’s less than other settlements in California and Oregon.

A New Jersey Catholic diocese has agreed to pay $87.5 million to settle claims involving clergy sex abuse with some 300 alleged victims in one of the largest cash settlements involving the U.S. Catholic Church.

“I want to express my sincere apology to all those who have been affected by sexual abuse in our Diocese,” Bishop Dennis Sullivan said in a statement. “My prayers go out to all survivors of abuse and I pledge my continuing commitment to ensure that this terrible chapter in the history of the Diocese of Camden, New Jersey never happens again.”

Details about what allegedly happened to the roughly 300 victims were not included in the proposed settlement, according to an attorney for some 70 of the victims.

“This settlement with the Bishop of Camden is a powerful advance in accountability,” said Jeff Anderson, an attorney representing 74 of the roughly 300 survivors. “The credit goes to the survivors for standing up for themselves and the truth.”

The diocese said the deal calls for setting up a trust, which will be funded over four years by the diocese and “related Catholic entities” to compensate survivors of sexual abuse. Part of the deal also requires maintaining or “enhancing” protocols to protect children.

“My prayers go out to all survivors of abuse and I pledge my continuing commitment to ensure that this terrible chapter in the history of the Diocese of Camden, New Jersey never happens again.”

Abuse survivors who filed a claim in the bankruptcy could get $290,000, according to victims’ attorneys Jay Mascolo and Jason Amala.

The agreement comes more than two years after New Jersey expanded the window of its civil statute of limitations to allow for victims of sexual abuse by priests to seek legal compensation. The legislation lets child victims sue up until they turn 55 or within seven years of their first realization that the abuse caused them harm. The previous statute of limitations was age 20 or two years after first realizing the abuse caused harm.

The diocese, like others across the country, had filed for bankruptcy amid a torrent of lawsuits — up to 55, according to court records — stemming from the relaxed statute of limitation.

In 2019, New Jersey’s five Catholic dioceses listed more than 180 priests who have been credibly accused of sexually abusing minors over a span of several decades, joining more than two dozen other states that have named suspected abusers in the wake of a landmark grand jury report in Pennsylvania in 2018.

Many priests on the lists were deceased, and others were removed from ministry.

Mike Catalini, Associated Press
@openpublish
Show Comments ()
Join the conversation: Login or create an account
Before you can comment, you need to update your profile to include your first and last name, as required in our comments policy. Then reload this page and you'll be set up for commenting. Update your profile