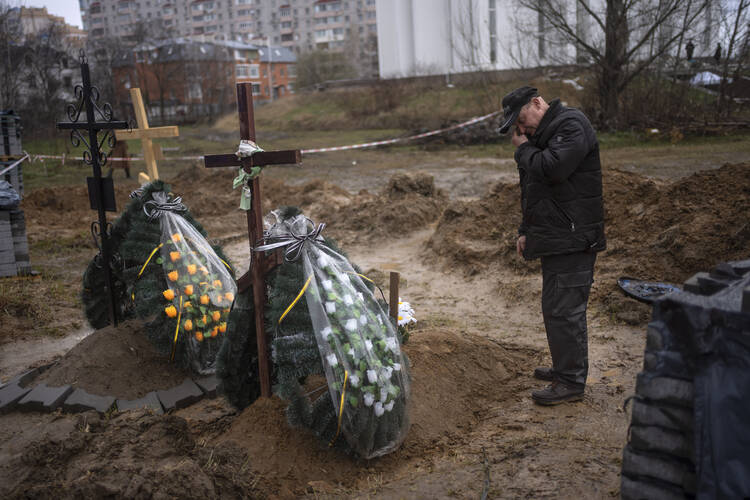 Oleg, 56, mourns for his mother Inna, 86, killed during the war against Russia in Bucha, in the outskirts of Kyiv, Ukraine, Sunday, April 10, 2022. (AP Photo/Rodrigo Abd)

Two staff members and five others taking shelter at a Caritas office in Mariupol, Ukraine, were killed after the building was destroyed by tank fire. The deadly attack was reported by Caritas-Spes Ukraine and Caritas Ukraine in posts on Twitter on April 11, but the incident itself occured on March 15.

Staff members for the Mariupol Caritas in Ukraine released an account of the attack on April 11, adding, “Unfortunately, we don't have the exact information about the people in our office at that time, so we can't tell who was there that day.” It did report that two accountants for Caritas and five others sheltering in the Mariupol office had been killed.

Reporting the attack on April 11, Caritas-Spes Ukraine expressed “its condolences to the parents of the innocent victims.”

The Caritas Ukraine Twitter account reported that the Caritas office in Mariupol was destroyed after being “shot by a Russian tank.” It added that people had taken refuge in the office, seeking to escape the near constant shelling of the city of Mariupol, which has been under attack since the Russian incursion began in February.

“Terrible, incredibly painful news from Mariupol,” read a post on the Caritas Ukraine Facebook account. “We remember how in 2018 the opening of the [Mariupol] Center took place—how much hope and prospects then were before us.

“All of this was destroyed by the Russians. Just at a loss for words!... Eternal memory to all innocently killed! Sincere condolences to family and loved ones!”

Caritas Ukraine reported that since the war began, its offices, including the one that was attacked in Mariupol, have been assisting Ukraine refugees in border nations and internally displaced people inside Ukraine. Its efforts have included attempts to transport Ukrainians trapped in conflict zones out of the fighting and into safer regions of the country.

According to its website, Caritas-Spes maintains 80 regional centers around Ukraine, which in normal times “actively organize assistance for those who need it regardless of creed, race or ethnicity through soup kitchens, social centers, houses of mercy, medical cabinets [and] rehabilitation centers.” Around a thousand employees and volunteers are currently working for Caritas in Ukraine, according to local media.

Caritas Internationalis is the church’s umbrella organization, based in Rome, representing scores of independent national Caritas groups at work on disaster relief, humanitarian aid delivery and economic development projects around the world.

As reaction to this latest outrage poured in on social media, the mayor of Mariupol, Vadym Boychenko, reported that more than 10,000 civilians have died in the Russian siege of his city. He said he believed the death toll so far could surpass 20,000 and added that corpses are “carpeted through the streets.”

Speaking by phone with The Associated Press, Mr. Boychenko said Russian forces brought mobile cremation equipment to Mariupol to dispose of the bodies. He charged that Russian forces, in an attempt to conceal the carnage, refused to allow humanitarian convoys into the city .

Russian forces have taken many bodies to a huge shopping center where there are storage facilities and refrigerators, Mr. Boychenko said.

“Mobile crematoriums have arrived in the form of trucks: You open it, and there is a pipe inside and these bodies are burned,” he said.