Homelessness is only getting worse, but we know the solution: a right to housing. 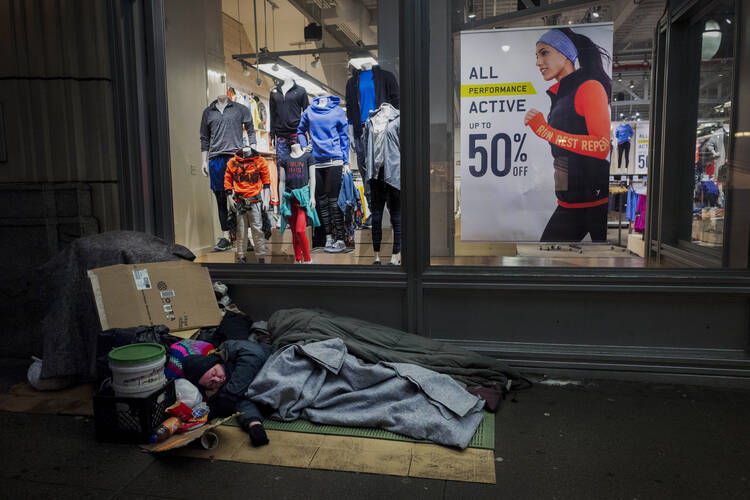 A homeless person sleeps under a blanket outside a window display in New York on Jan. 11, 2017. (AP Photo/Mark Lennihan, File)

When she was well into her sixties, my mother decided she had had enough. A longtime financial supporter of local homeless shelters, weary of how Reagan-era politicians demonized the poor, Marie decided direct action was necessary. She had admired those Jesuits who were part of the anti-war movement and had aided Cesar Chavez’s unionizing efforts. Now she was looking for some mortal gesture befitting both her faith and her outrage.

And so, roughly once a week, she would trudge up and down the hills of the Del Cerro Highlands neighborhood in east San Diego, asking for spare change of the lowest order from neighbors. That’s right: Mom collected buckets of pennies. Each month, she and my father would roll the pennies into paper cylinders, take them to the bank and donate the total to the San Diego Coalition for the Homeless.

There are as many as half a million homeless people in the United States on any given night, according to the National Alliance to End Homelessness, and the problem is getting worse.

Mom, who grew up working-class Irish in Philadelphia, had learned one thing early on: Kith and kin, not the government, had your back. But by the “penny lady” phase of her life, she had long ago grasped the limits of charity. By then, too, she was nearly as familiar with disappointment as she was fortified by reserves of hope. Gently questioned by her fledgling scholar son, she scoffed at the notion that she was making a substantive difference. But she owned her effort as a labor of love and hoped that the example would prick the conscience of those in official positions to do more on behalf of those in dire straits. Her nonviolent weapon of choice was shame.

I thought a lot about her example during the Covid-haunted months of 2021, a year that marked the 40th anniversary of the Callahan v. Carey consent decree, which established a right to shelter in New York City under the state’s constitution. In the decades since, hundreds of thousands have exercised that right, salvaging the lives of those who would otherwise have been consigned to the street or to cramped shelters. But no other U.S. city operates under that injunction, and it shows. While makeshift dwellings still crop up (and are getting razed) in New York, wholesale encampments have mushroomed elsewhere in the country, functioning as surrogates for non-existent public shelter systems. There are as many as half a million homeless people in the United States on any given night, according to the National Alliance to End Homelessness, and the problem is getting worse.

Still, if the Callahan outcome proved to be more exception than precedent, its crisis-management approach did much to perpetuate the patchworked, emergency-relief protocol that defines the U.S. response to homelessness to this day. In New York, we have street outreach programs and alternative housing options for street-dwellers who are put off by barrack-like shelters, as well as a limited supply of housing with support services attached. But even here, long-term solutions remain out of reach.

A pandemic is one way to disrupt our settled sense of what is possible; we need that kind of thinking applied to homelessness.

It is not as though we don’t know what works, because we do: a robust commitment to increasing affordable housing on both the regional and national levels. This kind of housing ensures security for working families and, not incidentally, supports the storied diversity of American cities. But the default method to address homelessness is still, after four decades and counting, the strategic equivalent of cloning penny ladies—a holding action masquerading as a policy.

Still, as any collector will tell you, some pennies are more valuable than others. The pre-pandemic commitment to ensure legal representation to low-income tenants in New York City’s housing court—preventing thousands of evictions in recent years—is one example of a program that works. Out-of-court mediation between landlords and tenants, such as that facilitated by one program in Chicago, also shows promise. So does the Veterans Administration’s success in drastically reducing the ranks of “chronically homeless” vets by placing them in affordable dwellings with “wrap-around” social services. And Broadway Housing Communities’s Sugar Hill in Upper Manhattan has shown that well-designed affordable housing can be both a godsend to homeless people and an asset to neighborhoods. (Housing is not all that these projects supply: They provide jobs, improve public safety and, in this instance, host a pre-school learning center and a children’s museum of art and storytelling.)

These are bracing, instructive exceptions. But their real value is that they show what it would take to achieve actual progress. A pandemic is one way to disrupt our settled sense of what is possible; we need that kind of thinking applied to homelessness.

In public health, we talk about the value of looking “upstream” to determine the sources of repeated health crises. In practice, though, we often settle for conscience-salving and wound-dressing.

In public health, we talk about the value of looking “upstream” to determine the sources of repeated health crises. That is where real preventive potential lies. (Improving local food sources and prices can be part of a coordinated approach to diabetes, for example.) In practice, though, we often settle for conscience-salving and wound-dressing; “harm reduction” is our go-to phrase, if only because it enables us to act now to limit the damage. Still, even when designed as stopgaps to larger problems, some remedial measures have lasting merit. Supportive housing began as a research-based experiment to reach street-dwelling homeless persons struggling with psychiatric disorders. It was then shown to be both effective and replicable, and is now something of a design standard. Emergency hotel placements have proven effective in reducing Covid mortality among formerly sheltered homeless singles.

But scaling up is what’s needed: Housing works, benefiting both the margins and the collective good.

In the long run, that means nothing short of a massive federal commitment to replenishing the stock of affordable housing, preserving what is left, relieving the rent burden on sorely strapped households, and equipping prospective renters with viable Section 8 vouchers. Given the toll of the pandemic, we also need to extend both eviction protections and Covid-prompted rental assistance.

Many of the operational details on how to help unsheltered individuals, beef up tenant protections and, most importantly, create more affordable housing are available elsewhere. But the overarching aspiration is simplicity itself: Reframe housing as a public good and remove enough of it from the marketplaces to ensure that elemental needs are met. After 40 years, it is evident that even a court-mandated right to shelter has limits. If we are serious about addressing homelessness as a structural deficiency, and not as a mysterious upsurge in sorely troubled people, we should be advocating for a right to housing.

Doing her bit was all Mom ever credited herself with, never grudging the toil. (She could always offer it up for Lent or trade it in for time off in purgatory.) But she was appalled at being held up as “part of the solution.” In her mind, her autumnal gesture was a bracing reminder to those who witnessed it and a thumb in the eye of those who refused to see. 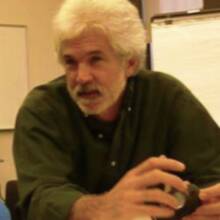 Kim Hopper is a professor of clinical sociomedical sciences at the Mailman School of Public Health, Columbia University, in New York.