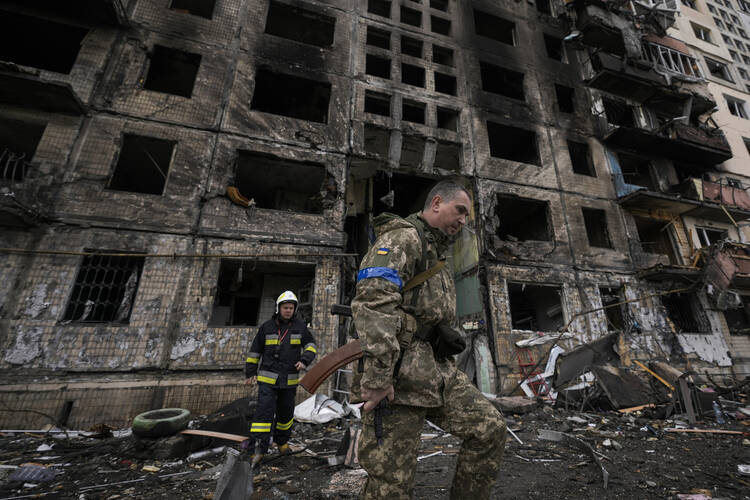 I find myself moved by a bright star in the deep, dark sky over the western Ukrainian city of Lviv. One tiny but very bright light sparkling through the cold night over the city I moved to because of Russian airstrikes on Kyiv, where I have been living and serving for the last 10 years.

I love Kyiv, one of the greenest, most pleasant and peaceful capitals in Europe. On Feb. 24, I woke up in a completely different world.

The peace was obliterated by the Russian bombs dropped on my city and so many other Ukrainian cities. Since that first morning, the Russians have not, even for a single day, stopped bombing and shelling our cities and villages.

Witnessing the level and scale of violence throughout these past days, I still can’t understand its source. Violence without reason, senseless cruelty.

Only a couple of weeks ago, Volnovakha, near Donetsk, was a town I visited many times, with people in the streets and hope in their eyes, with children going to school and parents thinking of their future. And now, like other cities under Russian bombardment, it doesn’t exist—neither the town nor the future for so many of its inhabitants. They have been killed by war.

During these first three weeks of Russia’s invasion, more than 900 rockets and missiles have been launched against Ukraine; more than 300 per week or almost 50 air attacks daily. In the city of Kharkiv alone, with a population of 1.5 million people, more than 600 buildings have been completely destroyed. The city of Mariupol, located on the northwestern coast of the Azov Sea, has been under siege for more than two weeks.

Similar stories can be told about the cities of Isyum, Irpin, Bucha, Chernihiv and many more.

Witnessing the level and scale of violence throughout these past days, I still can’t understand its source. The bombing of pediatric and maternity hospitals, of schools and churches, of a bread factory and residential apartments, has no strategic goal whatsoever. It is violence without reason, senseless cruelty.

Obviously, you can’t just start a war without a reason. And if there isn’t a legitimate one, you have to make one up. In his official declaration launching the “special military operation” against Ukraine, Russian President Vladimir Putin said that Russia’s two major goals are “demilitarization” and “denazification.”

The “Russian world” appears to be no more than a mental construct, a nicely decorated illusion, cultural cover over a dangerous antihuman political core. It’s a fake.

We Ukrainians know well that the Russian military aggression did not start in February. It began in 2014 with the annexation of Crimea and the occupation of pieces of two eastern regions of the country where Russia has installed quasi-governments. The West made a strategic decision not to notice that war in Ukraine. Before this total war on Ukraine began in February, the lives of 14,000 civilians and more than 4,000 military personnel had already been lost fighting the Russians since 2014, and more than 1.5 million people had already been forced to leave their homes and seek refuge in other parts of the country or abroad.

The response of the international community to the seizure of Crimea and aggression in the Donbas region did not seriously affect Russia.

Now what Mr. Putin means by “demilitarization” is to deprive our armed forces of any capacity to defend Ukraine from this ongoing Russian military aggression in the east.

To give that effort any credibility, it is necessary first to find a “Nazi” in the Ukrainian government, which is headed by President Zelenskyy, who is Jewish, in a country that lost around 9 million lives in its fight against the Nazi army during World War II. Everybody in Ukraine understands very well that Mr. Putin’s mission cannot be accomplished: you can’t find that which doesn’t exist.

But Russia’s authoritarian tradition makes it easy to undermine reality: You can always make something up. Most Russians have accepted the claims of their president about the threats coming from Ukraine or about the necessity of the military means used in the operation. With few exceptions they have not displayed the courage required to question the legitimacy of Mr. Putin’s justification for this war. In authoritarian societies, reality is dictated, not discovered, and the truth is constructed, not received. A “real” truth is dangerous. It sets people free.

The problem with this ideology of the “Russian world” is that it simply doesn’t exist. The Russian war against Ukraine proves this better than anything else.

Where there’s fear, there’s always room for shame. And shameful in this whole story is the official position of the Russian Orthodox Church.

The church of Christ has had the same mission through long centuries of human history: to announce, in words and deeds, to all people the healing truth of our Lord and savior Jesus from Nazareth, in whom eternal God manifests boundless love to humanity, that makes us all brothers and sisters in Christ, recipients of his eternal mercy.

After three weeks of ferocious bombardments, after so much suffering on the part of innocent civilians, most of whom consider themselves the faithful of the Orthodox Church, the patriarch of Moscow has not said a word in their defense. Instead he makes loud political statements accusing those countries that provide the means of defense to the Ukrainian people of somehow provoking or prolonging the war.

To make his arguments more “credible,” the patriarch focused the attention of his flock on the proliferation of gay pride parades that supposedly are a “test to enter the club of these powerful countries.” But he has said not a single word about innocent victims of the Russian air and artillery attacks, not a word of consolation for those whose houses and lives were cruelly destroyed.

This is what happens when the church preaches not the Gospel, but state ideology; when the value, significance and dignity of a human being vanishes before the shadow of a “great culture”; when the obligation of political authorities to serve the needs of their people is replaced by an insatiable desire to satisfy their own interests at the cost of the governed; when personal responsibility gives way to exaggerated national pride and reality to nicely decorated mental illusions.

After three weeks of ferocious bombardments, after so much suffering on the part of innocent civilians, the patriarch of Moscow has not said a word in their defense

The concept of the “Russian world” is often defined by the representatives of the Russian elite, especially by Patriarch Kirill and Mr. Putin, as the “Holy Rus,” a transnational “Russian civilization.” It includes the nations of Russia, Ukraine and Belarus, as well as territory occupied by ethnic Russians and Russian speakers all over the world.

According to this ideology, the “Russian world” has one political center in Moscow and one spiritual center in Kyiv, with one Russian language as a means of communication and the propagation of Russian culture. The Russian Orthodox Church is its single dominant religious institution, and the patriarch of Moscow its primary religious leader, now acting in a complete spiritual symphony with the president of Russia, the political leader of this vast social, spiritual and cultural realm.

Russian leaders position the collective West as an opponent to this political and spiritual civilization, arguing that Western “liberalism,” “globalization,” “militant secularism” and “gay pride parades” are its antitheses. The “Russian world” has been used throughout the past decades as an ideological cover for the high degree of social injustice in Russia, to prevent citizens from sympathizing with Western democratic institutions and to legitimize the imperialistic ambitions of the Russian political establishment. State propaganda based on the tenets of this ideology have for years distorted citizens’ perception of reality by describing anything and everything that would stand against the autocratic regime of Mr. Putin as “Nazi” or “fascist.”

The problem with this ideology of the “Russian world” is that it simply doesn’t exist. The Russian war against Ukraine proves this better than anything else. When you see a Russian tank blowing up an elderly man in Mariupol or Russian soldiers killing civilians standing in line for bread in Chernihiv, and when you hear not a single word against this diabolic violence from the spiritual leader of the ”Russian world,” you understand that it simply has nothing to do with spirituality, humanity or reality.

This is what happens when the church preaches not the Gospel, but state ideology; when the value, significance and dignity of a human being vanishes before the shadow of a “great culture.”

When you see Russian bombs destroying Orthodox churches, and Russian-speaking Ukrainian soldiers sacrificing their lives in a courageous fight against the Russian army, and when you listen to Ukrainian mothers who have lost their sons, cursing Russian invadors in Russian, you realize that no spiritual or cultural unity provided by the Russian language or the Russian church really exists.

The “Russian world” appears to be no more than a mental construct, a nicely decorated illusion, cultural cover over a dangerous antihuman political core. It’s a fake.

That bright sparkling star in the cold night sky absorbed my whole attention for a minute. It was a beautiful and peaceful sight, an alternative to the world destroyed by war that I had been living in for some days.

But no matter how peaceful and beautiful it appeared, I know it inhabited a far-off space that was probably not fit for human life. Like the shiny idea of Holy Rus, it was sparkling and appealing, but it offered no safe place for human life to carry on.

People fall prey to illusions. They seek to create a significance that will outlast their lives. A social class, a political nation, a biological race or a cultural identity—all of them may seem bright enough to capture our imagination, offering a belonging to something greater than ourselves. Yet just as bright, remote stars in cold space, these ideologies cannot sustain human life.

We have already experienced this a number of times in this last, bloody century. It looks like we have not learned the lesson yet.

Maybe it’s still not too late.

Correction: Due to an editing error, a previous version of this article stated incorrectly that the town of Volnovakha is near Kyiv. 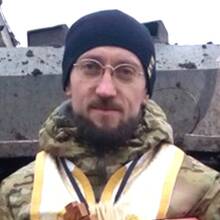 Andriy Zelinskyy, S.J., is an author and lecturer at the Ukrainian Catholic University. He is advisor to the Head of the Ukrainian Greek-Catholic Church and the church's chief military chaplain.