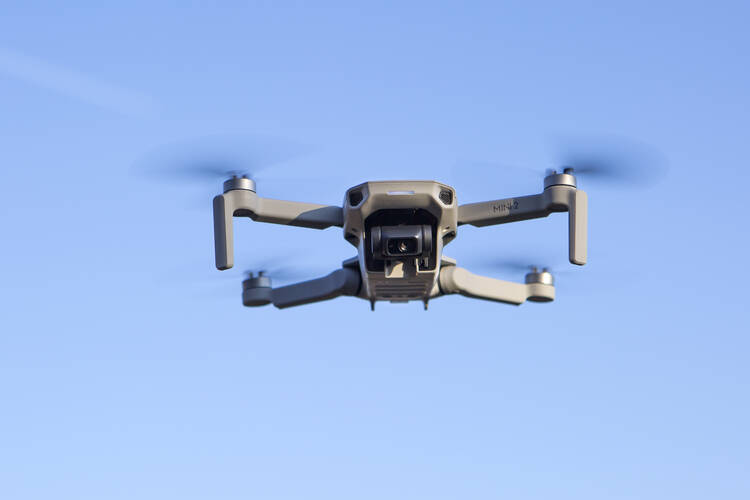 An Israeli counter-drone technology company says that it protected Pope Francis and 60,000 people from a rogue drone at an outdoor Mass in Sastin, Slovakia, on Sept. 15.

In a press release published Dec. 14, D-Fend Solutions, the company behind the drone takeover product EnforceAir, revealed that “a previously unseen do-it-yourself drone was detected by EnforceAir during the Mass.”

While police originally wanted to use a signal jammer to stop the rogue drone, the company said, they decided against it because it could disrupt the media and security operations around the Mass. Instead, “EnforceAir fended off the rogue drone, sending it back to its original takeoff position, far away from the large crowd.”

An Israeli counter-drone technology company says that it protected Pope Francis and 60,000 people from a rogue drone at an outdoor Mass in Sastin, Slovakia, on Sept. 15.

Jeffrey Starr, chief marketing officer of D-Fend Solutions, told America in an interview that EnforceAir was able to fend off the drone by taking control of it remotely and sending it back to the location of its original pilot.

While not all do-it-yourself drones like the one spotted during the pope’s Mass are dangerous, Mr. Starr said that they are considered a potential threat and are becoming more common. These drones are built by owner-operators who are able to source high-quality components and can travel long distances.

In response to a question about whether seeing an unauthorized drone near a large event is common, Mr. Starr said, “No.”

“Certainly in a sensitive space like this where you have a large event going on, a large amount of people, V.I.P.s, the security professionals definitely want that to be a secure area. They don’t want any unknown, unauthorized drones flying around,” Mr. Starr said.

Several authorized drones were detected by the company at the event and were allowed to continue flying.

In response to a question about whether seeing an unauthorized drone near a large event is common, Mr. Starr said, “No.”

Mr. Starr sees the possible threat to the papal Mass as a confluence of two of the company’s focus areas: protecting high-profile individuals who have increasingly been the targets of drone attacks, like the recent assassination attempt on the prime minister of Iraq, and protecting major events that draw large crowds.

“We’re very, very proud of the fact that we’re very focused on delivering safety in a controlled and protective manner to these situations,” Mr. Starr said.

When the pope visits a foreign country, that country is responsible for the pontiff’s security. During Pope Francis’ visit to Slovakia, from Sept. 12 to 15, Slovakia’s interior ministry contracted D-Fend Solutions to mitigate drone threats at the pope’s events around the country. D-Fend Solutions also works with the U.S. military, homeland security and federal law enforcement and has previously been contracted to protect the G7 summit of world leaders.

Pope Francis’ visit to Slovakia included meetings with both high-profile government and religious leaders from the Catholic, Orthodox and Jewish communities and those living in poverty. The pope visited a homeless shelter run by the Missionaries of Charity and Slovakia’s largest Roma settlement.

The trip concluded with an outdoor Mass in Sastin, near Bratislava, which is home to a famous Marian shrine, Our Lady of Sorrows. It was during this Mass when, D-Fend says, they detected the rogue drone.