Pope Francis in Greece: ‘We are witnessing a retreat from democracy.’ 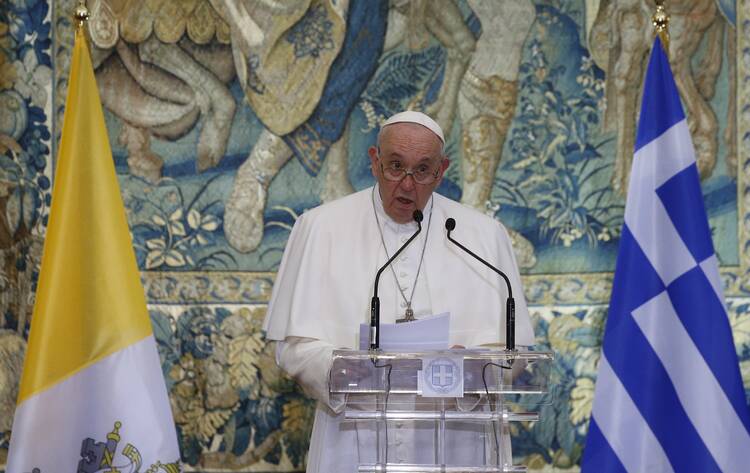 Pope Francis speaks at a meeting with government authorities, civic leaders and the diplomatic corps at the presidential palace in Athens, Greece, Dec. 4, 2021. (CNS photo/Paul Haring)

“Here democracy was born,” Pope Francis said in a powerful keynote speech in Athens in which he expressed his grave concern that “today, and not only in Europe, we are witnessing a retreat from democracy” and emphasized the pressing need for “a change of direction.”

He expressed his concern when he addressed the Greek authorities, members of its civil society and the diplomatic corps at the presidential palace in Athens, immediately on his arrival in the Greek capital on Dec. 4.

He spoke after receiving a warm welcome from the Greek president, Katerina Sakellaropoulou, who said the country was honored that he chose to come a second time and in a year when it was celebrating the 200th anniversary of the beginning of the Greek revolution against the Ottoman rule that led to the present modern state.

In a powerful keynote speech in Athens, Pope Francis expressed his grave concern that “today, and not only in Europe, we are witnessing a retreat from democracy.”

In words that appeared to be directed not only to Greeks but also a wider audience, Francis reminded people that “democracy requires participation and involvement on the part of all; consequently, it demands hard work and patience. It is complex, whereas authoritarianism is peremptory and populism’s easy answers appear attractive.”

He noted that “in some societies, concerned for security and dulled by consumerism, weariness and malcontent can lead to a sort of skepticism about democracy.” He emphasized that “universal participation is something essential; not simply to attain shared goals but also because it corresponds to what we are: social beings, at once unique and interdependent.”

He drew attention to the fact that today, “we are also witnessing a skepticism about democracy provoked by the distance of institutions, by fear of a loss of identity, by bureaucracy.”

Democracy “is complex, whereas authoritarianism is peremptory and populism’s easy answers appear attractive.”

“The remedy is not to be found in an obsessive quest for popularity, in a thirst for visibility, in a flurry of unrealistic promises or in adherence to forms of ideological colonization but in good politics,” Francis said.

He reaffirmed what he has said in his encyclical “Fratelli Tutti”:

Politics is, and ought to be in practice, a good thing, as the supreme responsibility of citizens and as the art of the common good. So that the good can be truly shared, particular attention, I would even say priority, , should be given to the weaker strata of society. This is the direction to take.

Francis insisted that “a change of direction is needed, even as fears and theories, amplified by virtual communication, are daily spread to create division.

“Let us help one another, instead, to pass from partisanship to participation; from committing ourselves to supporting our party alone to engaging ourselves actively for the promotion of all.”

He advocated that political and social leaders should move from from partisanship to participation on such issues as “the climate, the pandemic, the common market and, above all, the widespread forms of poverty.

Francis insisted that “a change of direction is needed, even as fears and theories, amplified by virtual communication, are daily spread to create division.

Francis acknowledged that “this might seem a utopia, a hopeless journey over a turbulent sea, a long and unachievable odyssey. Yet, as the great Homeric epic tells us, traveling over stormy seas is often our only choice. And it will achieve its goal if it is driven by the desire to come to home port, by the effort to move forward together.”

In a speech in which he referred to Socrates, Homer, Aristotle and Hippocrates—and recalled that the Gospels were written in Greek—Pope Francis said, “Without Athens and without Greece, Europe and the world would not be what they are. They would be less wise, less happy,” Francis said.

“From Mount Olympus to the Acropolis to Mount Athos, Greece invites men and women of every age to direct their journey of life toward the heights. Toward God, for we need transcendence in order to be truly human,” he said. He noted, however, that in the West today “there is a forgetfulness of our need for heaven, trapped as we are between the frenzy of a thousand earthly concerns and the insatiable greed of a depersonalizing consumerism.”

Francis said that from Athens “our gaze is directed not only to what is on high, but also toward others.” He recalled that “here, according to the celebrated words of Socrates, people began to view themselves as citizens not only of a single city or a single country but of the entire world. Citizens. Here man first became conscious of being ‘a political animal’ and, as members of the community, began to see others not subjects but as fellow citizens, with whom to work together in organizing the polis.”

In the West today “there is a forgetfulness of our need for heaven, trapped as we are between the frenzy of a thousand earthly concerns and the insatiable greed of a depersonalizing consumerism.”

He told his global audience, “here democracy was born” and “thousands of years later” it became “a great house of democratic peoples,” namely “the European Union and the dream of peace and fraternity that it represents for so many peoples.”

In his unusually long speech, delivered in Italian, Pope Francis also spoke about the migration crisis. He said, “This country, naturally welcoming, has seen on some of its islands the arrival of numbers of our migrant brothers and sisters greater than the number of their native inhabitants; this has heightened the difficulties still felt in the aftermath of the economic crisis.”

At the same time, he said, “the European community, prey to forms of nationalistic self-interest, rather than being an engine of solidarity, appears at times blocked and uncoordinated.” He recalled that in the 20th century “ideological conflicts prevented the building of bridges between Eastern and Western Europe” and said “today the issue of migration has led to breaches between South and North as well.”

He called for “a global, communitarian vision with regard to the issue of migration” and urged that “attention be paid to those in greatest need, so that, in proportion to each country’s means, they will be welcomed, protected, promoted and integrated, in full respect for their human rights and dignity.”

“The European community, prey to forms of nationalistic self-interest, rather than being an engine of solidarity, appears at times blocked and uncoordinated.”

“Rather than a present obstacle,” he said, “this represents a guarantee for a future marked by peaceful coexistence with all those who increasingly are forced to flee in search of a new home and new hope. They are the protagonists of a horrendous modern Odyssey.”

He recalled that “when Ulysses landed in Ithaca he was recognized, not by the local lords, who had usurped his house and goods, but by the person who cared for him, his old nurse. He recognized him by seeing his wounds.”

“Sufferings bring us together,” Francis said. “Realizing that we are all part of the same frail humanity will help us to build a more integrated and peaceful future. Let us turn what seems only a tragic calamity into a bold opportunity!”

He also spoke about the pandemic, “a great calamity” that “has made us rediscover our own weakness and our need for others.” He encouraged the government’s vaccination campaign in Greece as “necessary” but also noted that amid great hardships “there has been a remarkable growth in solidarity,” to which, he said, the small Greek Catholic Church is happy to contribute.

Pope Francis commended Greece for its faith and Christian traditions and encouraged it to continue “in the ways of openness, inclusion and justice.”

He concluded his speech with these words:

From this city, from this cradle of civilization, may there ever continue to resound a message that lifts our gaze both on high and towards others; that democracy may be the response to the siren songs of authoritarianism; and that individualism and indifference may be overcome by concern for others, for the poor and for creation. For these are essential foundations for the renewed humanity which our time, and our Europe, has need. [In Greek:] May God bless Greece!