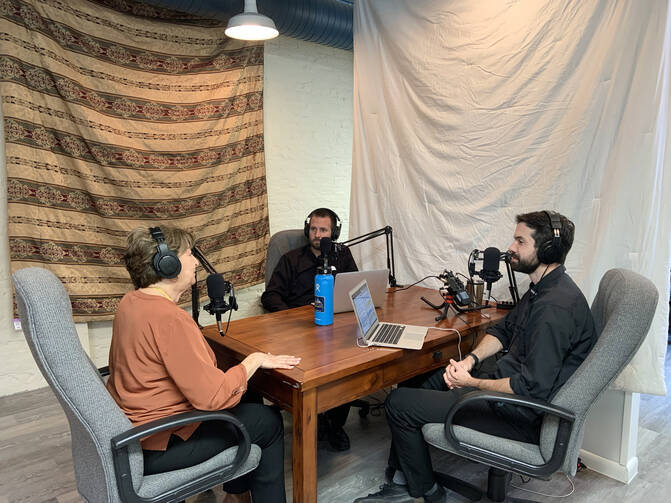 The Revs. Louie Hotop, right, and Brian A. Strassburger interview Ofelia de los Santos, director of Jail Ministry for the Diocese of Brownsville, for the Jesuit Border Podcast. Courtesy photo

(RNS) — In the years working toward their priestly formation, the Revs. Brian Strassburger and Louie Hotop became accustomed to difficult assignments. Hotop taught English in a single-room schoolhouse in Siberia and ministered to the unhoused in San Francisco, while Strassburger ministered to youth in rural Nicaragua and served as a chaplain in Boston.

Now, after Strassburger and Hotop were ordained in July, the two are working together, having been sent to the Diocese of Brownsville in Texas to minister in the Rio Grande Valley along the U.S.-Mexico border.

Without an existing Jesuit community there, they rented a house and got to work. They celebrate Mass with migrants on both sides of the border — at a humanitarian respite center in McAllen, Texas, and at a migrant camp in an outdoor plaza in Reynosa, a city in the northern part of the Mexican state of Tamaulipas — and have assisted in anything from making ham-and-cheese sandwiches to serving lines of people asking for milk and diapers for their babies.

It’s been eye-opening to witness the sheer number of migrant women and children along the border, said Strassburger — a contrast to what he referred to as the stereotype of young single men “looking to steal American jobs” — as well as seeing how migrants themselves are looking out for one another by cooking and providing security at the camp in Reynosa. Strassburger and Hotop have also been struck by the level of faith-based organizing at the border.

These experiences are what propelled Strassburger and Hotop to start a podcast to document the stories of the migrants, advocates and organizations they’re encountering along both sides of the southern border.

These experiences are what propelled Strassburger and Hotop to start a podcast to document the stories of the migrants, advocates and organizations they’re encountering along both sides of the southern border. It’s called “The Jesuit Border Podcast” and so far includes two episodes: The first one features an interview with Bishop Daniel Flores, who leads the Diocese of Brownsville; the second features Nancy Dimas with the Project Dignity Legal Team, a ministry of Catholic Charities RGV. The aim of the podcast is to explore immigration through a lens of Catholic social teaching. The first episode went live Nov. 16.

“The important thing, to us, is not to shine a light on us or what we’re doing or the great things that the Jesuits are doing, but to shine a light on people who have been here … working on the border and also the migrants themselves whose stories are worth telling,” said Hotop, 31, who did radio while studying philosophy at St. Louis University.

Strassburger, 37, said he hopes that, through this work, they can convey to migrants “there are American citizens that really care about their rights.”

“I don’t want them to feel like they are discarded or uncared for or ignored or forgotten,” said Strassburger, who has served as editor-in-chief for The Jesuit Post.

In their first episode, “Life and Dignity of the Human Person,” the priests recap their first time at the Reynosa camp. Without knowing anyone, they arrived at the camp, unloaded their car with hygienic products and other donated goods and quickly lost order as crowds of people showed up. They thought, “There’s got to be a better way.”

Soon enough, Hotop and Strassburger, with the initial help of a Doctors Without Borders volunteer, began familiarizing themselves with the organizing structures of the camp. They learned that migrants took charge of the distribution efforts, giving priority to those who most recently arrived at camp. This was inspiring to the priests.

Currently, Hotop and Strassburger spend half of their time attending to the pair of parishes they were assigned in and around the Brownsville area. They run a youth group and celebrate Masses, weddings and baptisms. The other half is devoted to responding to the migrant situation. The priests split their time between the respite center in McAllen — which is run by Catholic Charities — and the migrant camp in Reynosa, across the border from McAllen, where thousands are estimated to be staying.

Migrant camps have grown on the Mexican side of the border because of policies that either force migrants who are seeking asylum to stay in Mexico while awaiting response from the U.S. government or that prohibit them from seeking asylum due to pandemic-related public health orders.

Strassburger and Hotop celebrate morning Mass at the camp in Reynosa and drop off donations at what they referred to as the “four cocinas,” or the four kitchens, run by migrants on each corner of the plaza. They then cross the border and visit migrants passing through the respite center in McAllen, celebrate Mass there and then head back to Brownsville.

While this is their current routine, the priests realize their ministry could look very different in the coming months.

“We’ve really been sent here to look at the situation, observe the situation and to respond ... We right now are really given the ability to adapt to a dynamic and changing situation,” Hotop said.

Hotop recognizes he and Strassburger have been allowed a different kind of freedom to adapt, which, he said, “is not what a lot of Catholic priests get, especially in their first years of priesthood.” Usually, he said, young priests are sent to a certain parish or an assignment, but “you’ve got a very clear job.”

“We’ve been sent together in order to creatively think about how best to engage with the situation,” Hotop said.

To Hotop, their formation, which has sent them to accompany marginalized communities across the world, has taught them how to comfort people amid uncertain conditions.

“We can’t just say, ‘Well, everything is going to be better soon enough. The law is going to change soon enough,’ because that’s just not true. We don’t know that and very likely it won’t. You have to be willing to sit with people in the discomfort of uncertainty,” Hotop said.