Your Take: Has polarization poisoned the two-party system? 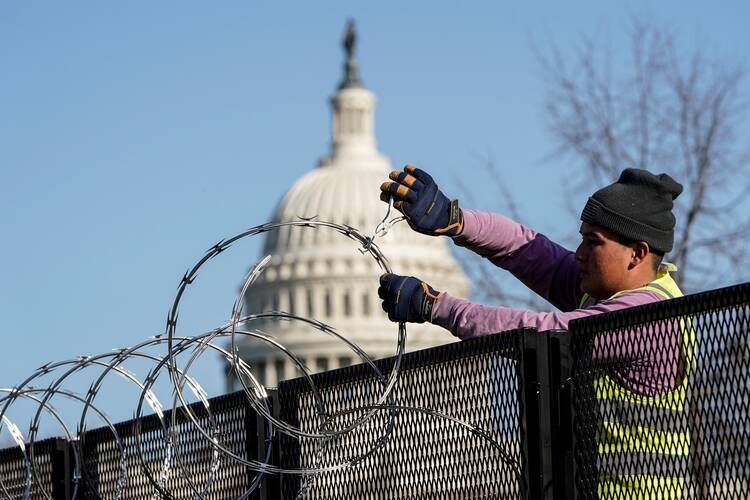 A worker in Washington removes razor wire from the top of security fencing March 20, 2021, as part of a reduction in heightened security measures put in place after the Jan. 6 attack on the U.S. Capitol. (CNS photo/Joshua Roberts, Reuters)

Below is a curated selection of responses to the November issue’s cover story, “A Pro-life Democrat, a Divided Nation: Lessons From 16 Years in Congress,” by Daniel Lipinski, who served eight terms as the U.S. Representative for Illinois’ Third Congressional District, from 2005 to 2021. Responses have been edited for length and clarity.

The author says that the Democratic Party or some parts of it moved “leftward.” I’m not sure what that word means. There are a few Democratic members who are economically progressive, but there is no great movement in the direction of democratic socialism. It might help if the author specified what “leftward” actually means and what he thinks is problematic with it.

I think the author is correct about the problem of the two-party system and polarization. My dream would be to have a many-party system (with the present two parties in the dustbin of history) representing different alignments. Then parties would have to collaborate and compromise.

As a political centrist, I see both parties as lacking much interest in anything resembling tolerance. Congressman Lipinski followed his ideals, a near-impossible achievement in today’s political malaise.

Mr. Lipinski’s view on Catholics and the abortion issue is why President Trump came to power. Catholics supported Trump because of his insincere and self-serving stance on abortion, forgetting that there are more issues regarding human dignity than just abortion, such as poverty, racism, immigration, etc.

As a pro-life Independent who lives in Mr. Lipinski’s district, I read his article with a certain fascination. Between the two elections against his opponent, I received a number of calls from her focus groups contrasting their positions on more than just abortion. Those were designed to show her as more compassionate and reasonable than Mr. Lipinski. From these calls I knew his re-election was in trouble.

While I agree that life begins at conception, I believe there are more important things than one’s stand on abortion. The pro-life cause should also be concerned about suicide by veterans, suicide over gender orientation, deaths in refugee camps, and for people escaping from murder and abuse in foreign countries.

As a political moderate, I wished I saw more political leadership on his positions beyond abortion. Mr. Lipinksi’s concern for reaching across the aisle is the mantra for all reasonable citizens hoping to save our democracy, but I do not see much action or leadership toward this end. Jim Fogarty

I am a Democrat, because the party agrees with me on nearly every issue I can think of: climate change, conservation, immigration, expanding the electorate, gun control, international relations, etc. There are, of course, a few issues we disagree on, such as abortion and the “defense” budget (it’s way too high). But by contrast, the Republican Party and I agree on almost nothing.

The last Republican I ever voted for for any office was Reagan in 1984. Since then, it’s been a straight Democratic ticket right down the line. It used to be possible to be bipartisan, but not any longer. I’ve always been proud to say that I am the only person I know who voted for both Barry Goldwater and George McGovern. That would, sadly, never happen today.

Kudos to the writer for articulating a dilemma I feel every day. “Old” Democratic party principles now being submerged by a pro-choice mandate. To that part of old party principles, like the common good, I would add the Beatitudes, which could be found in the old days if one looked hard enough. No more, and our country is poorer for that loss of compassion.