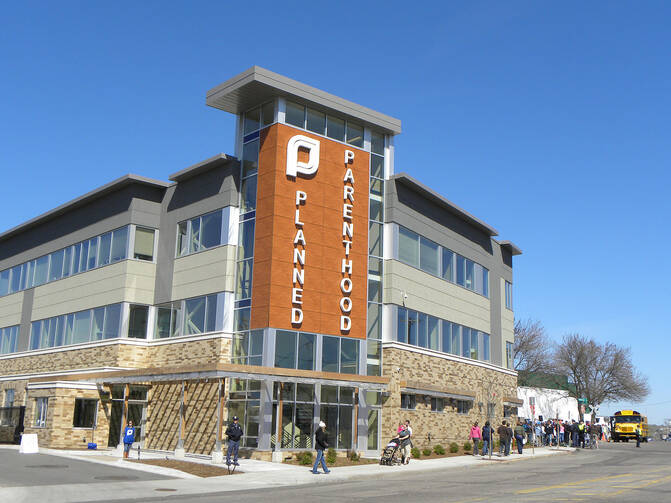 LOS ANGELES (RNS) — Students and alumni at Loyola Marymount University — a private Catholic school founded by the Jesuit and Marymount orders — are railing against a fundraiser for Planned Parenthood that a student group is hosting on Friday (Nov. 5).

The semiformal event at the school’s Westchester campus near Playa Vista is being planned by LMU Women in Politics, a registered student organization that fights “for women’s equality on and off campus.”

The group, which has been outspoken against the new Texas law that bans abortion as early as six weeks into pregnancy, said in its flyer that all ticket proceeds from the event will be donated to Planned Parenthood.

The LMU Women in Politics student organization, which has been outspoken against the new Texas abortion law, said that all ticket proceeds from the event will be donated to Planned Parenthood.

A petition has been launched by Samantha Stephenson, a Catholic writer and Loyola Marymount alumnus, urging LMU President Timothy Law Snyder to cancel the event that she calls an “egregious violation” of the university’s “Catholic identity.”

The petition is posted on RenewLMU, which bills itself as “an alliance of students, alumni, faculty, donors, and other LMU supporters who seek to strengthen LMU’s Catholic mission and identity.”

Stephenson said in the petition that the group should “select a more worthy recipient of funds, one that more effectively supports women’s dignity and whose primary purposes are not at odds with the Catholic Church. Selecting Planned Parenthood as a recipient for fundraising on a Catholic campus is decidedly divisive.”

Planned Parenthood offers a range of reproductive health care services, including abortion, which the United States Conference of Catholic Bishops describes as “gravely contrary to the moral law.”

Samantha Stephenson, a Catholic writer and Loyola Marymount alumnus, launched a petition urging LMU President Timothy Law Snyder to cancel the event that she calls an “egregious violation” of the university’s “Catholic identity.”

The fundraiser is happening just days after hundreds of students at Archbishop Riordan High School in San Francisco walked out of an all-school assembly Oct. 22 that featured antiabortion speaker Megan Almon, according to the San Francisco Chronicle.

Women in Politics could not be reached for comment, but in a statement Wednesday, the group said it has received “overwhelming support” from faculty and students.

“There has also been backlash from conservatives on and off campus. These small groups will not stop us from creating change and celebrating making history with all of you. If anything, we are more motivated now than ever before.”

Also protesting the event are the California College Republicans, who are supporting their LMU chapter in condemning the fundraiser.

“It would be one thing to allow a pro-choice speaker on campus — as that would be protected under free speech — but to allow a fundraiser for Planned Parenthood and to give the students a large space on campus for free is a grave offense we cannot ignore,” said Will Donahue, president of the LMU chapter of the College Republicans, in a statement.

Angelus News, the Archdiocese of Los Angeles’ news publication, reported that the university said it would not move to block the event. In a statement provided to Angelus, Loyola Marymount said the event is not “university-sponsored,” despite it being held on the school’s campus.

In an updated flyer for the event, Women in Politics highlighted that the group’s activities “do not represent the university’s views and shall not be construed as approval or endorsement by the university.”

“The events, actions, or positions of student organizations, including Women in Politics, are not endorsed by the university,” the university said.

In an updated flyer for the event, Women in Politics highlighted that the group’s activities “do not represent the university’s views and shall not be construed as approval or endorsement by the university.”

It noted that the updated disclosure was required by the university and that it was “not created by Women in Politics.”

Stephenson told Religion News Service she wished the university would do more.

“It makes me wonder, do they just not have the courage to do that because they fear the backlash from the Planned Parenthood set more than they want to and are willing to stand up to for those of us who want to uphold human dignity and work for life,” Stephenson said.