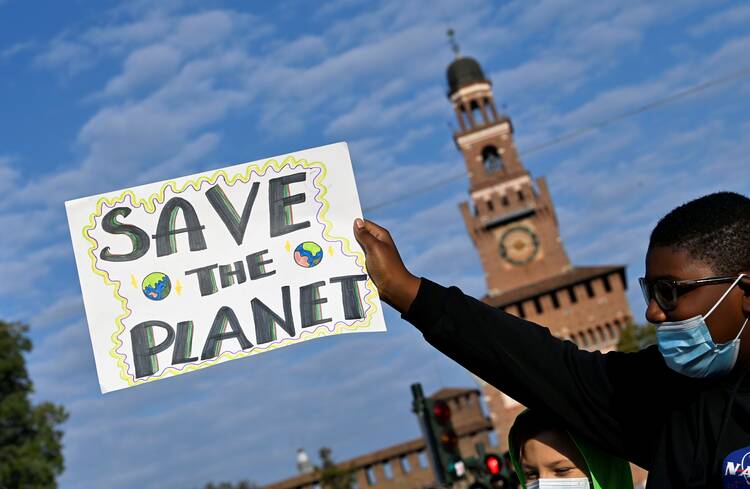 A demonstrator holds up a sign as he attends a Fridays for Future climate strike in Milan Oct. 1, 2021, ahead of the U.N. Climate Change Conference in Glasgow, Scotland. (CNS photo/Flavio Lo Scalzo, Reuters)

Bill O’Keefe will be closely watching the meeting between Pope Francis and U.S. President Joe Biden on Oct. 29. Mr. O’Keefe is the executive vice president for mission, mobilization and advocacy at Catholic Relief Services in Baltimore. He suggests that meeting with the pope could inspire the second U.S. Catholic president to move on to the United Nations’ COP26 meeting on climate change in Glasgow with new vigor and urgency.

The dialogue in Rome between the president and the pontiff, he adds, also provides Catholic citizens in the United States an opportunity to remind their representatives in Congress to be mindful of their obligations to the care of creation and to the world’s most vulnerable people. “Having the most powerful political leader in the world, the president of the United States, and the greatest moral voice of our time talking together about climate change is extremely powerful,” Mr. O’Keefe says. “I hope that will inspire the president to take bolder action, and I hope that it will also inspire other leaders to step up.”

The U.N.-sponsored negotiations in Scotland that will follow Mr. Biden’s visit with Pope Francis could prove crucial to C.R.S. efforts overseas, according to Mr. O’Keefe.

The dialogue in Rome between the president and the pontiff provides U.S. Catholics an opportunity to remind representatives in Congress to be mindful of obligations to care of creation.

Climate change threatens C.R.S. work “literally everywhere we’re operating,” he says. “If you go and you talk to the farmers whom we’re supporting, if you talk to the people living on vulnerable, marginal land, they will all tell you the climate has changed out from under them.

“In order to do our mission of assisting the poor and vulnerable to capture their God-given opportunities in life,” Mr. O’Keefe says, “we have to address this existential problem of climate change.” C.R.S. is the relief and development agency of the Catholic Church in the United States with projects in 114 nations around the world.

Just about everyone on the planet understands the threat of climate change because they are already experiencing it, Mr. O’Keefe says, from “the coffee farmers in Central America who have to move up the mountain in order to grow the same coffee that they used to grow at a lower elevation” to farmers in the Sahel region of Africa “who’ve had to migrate because the rains are so unstable and unpredictable” to farmers in Rwanda “who have to change crops because the rainy season that used to come at a regular time no longer does.” He hopes COP26 will produce credible and practical commitments from global industrial powers, especially from nations like the United States, that have contributed the most to the problem.

Global economies confront a diminishing margin for error as the global temperature creeps closer to a point of no return—scientists say the increase must be kept to no more than 1.5 degrees Celsius—and as the Covid-19 pandemic has already thrown an unprecedented monkey wrench into progress against global poverty. “It’s going backwards in a lot of places,” Mr. O’Keefe says. While it is hard to disaggregate the impact of climate change from the pandemic’s effects on the world’s vulnerable economies and people, Mr. O’Keefe believes that millions more will confront hunger and dislocation in the near term because of the dual and entangled crises.

“The good news is that it is clearly still possible to prevent many of the worst-case scenarios and just as importantly, from our perspective, to help people adapt to those scenarios,” Mr. O’Keefe says. Those scenarios are dire indeed, however.

C.R.S.’s Bill O’Keefe: “In order to do our mission of assisting the poor and vulnerable to capture their God-given opportunities in life, we have to address this existential problem of climate change.”

He warns that hundreds of millions of people who rely on subsistence agriculture could face drought and crop failure because of climate change. The inevitable hunger that would follow will mean crisis-driven migration. Mr. O’Keefe describes a vicious cycle set in motion by global warming as climate refugees intensify conflict and political instability in a modern exodus from drought, rising sea levels and temperatures that exceed human tolerance. These are not hypothetical scenarios, he adds. Central American migrants, abandoning subsistence agriculture communities devastated by drought and more frequent and extreme storms, are already clashing with the border patrol in the U.S. Southwest.

In recent years COP gatherings have produced lofty words from representatives of industrial nations, where the problem originates, and unfulfilled financial commitments to the people of the developing world, where climate change impacts will be acute.

In September Mr. Biden told the United Nations General Assembly that he planned to double the U.S. commitment to vulnerable nations to $11.4 billion per year by 2024. That additional money, yet to be approved by Congress, would help achieve a global goal set more than a decade ago of $100 billion per year by 2020—a pledge now delayed until 2023—to support climate action in vulnerable countries.

It is only fair that the United States, as the world’s largest current and historic producer of greenhouse gases, should maintain a leading role in paying for the crisis response in the developing world, Mr. O’Keefe says. But diverting those resources to mitigation efforts outside the United States will require a change of will among members of Congress and stronger advocacy from their constituents, he says. “One of the things we’ve learned in the last couple of years is there is plenty of money available for things that our political process prioritizes,” he adds. “If we decide as a country that we need a trillion dollars to spend in Afghanistan in a war, we find it. If we decide as a country that we need several trillion dollars, justifiably, to prop up our small businesses and our economic system during the pandemic, we find that.

COP gatherings have produced lofty words from representatives of industrial nations, where the problem originates, and unfulfilled commitments to the developing world, where climate change impacts will be acute.

“We just have to decide to spend the billions of dollars needed to both take the steps to reduce our own carbon footprint as a country and to protect the most vulnerable people around the world. The resources are there.”

U.S. Catholics are fortunate to have a spiritual leader in Pope Francis who has frequently made the case for them about the urgency of the problem and the ethical obligation to respond, he says. Pope Francis has challenged the consumption-driven ethos of our times a throwaway culture that treats creation and people as dispensable, Mr. O’Keefe says. “By not addressing this problem, what we’re really throwing away are the lives of hundreds of millions of people who are going to be impacted by this, [people] who did not cause the problem. And that’s really where the moral weight is.”

Pope Francis is “continually bringing the periphery to the center,” Mr. O’Keefe adds—a rhetorical feat he will likely achieve again once the G20 meetings begin in Rome on Oct. 31 and COP26 convenes the same day in Glasgow. Francis ensures that “the concerns of the people who aren’t in the room” are the ones that are prioritized by the powerful, Mr. O’Keefe says.

“That’s been his consistent message. It can’t be said often or strongly enough, and let’s hope the world leaders take it in.”