The place of the poor in Pope Francis' environmental message 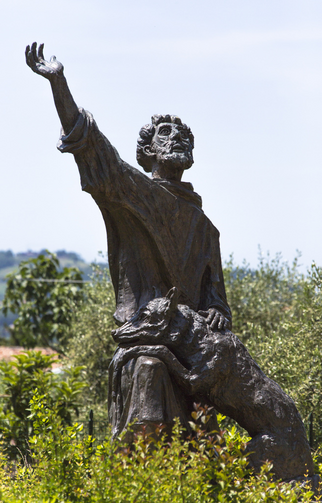 When Pope Francis was elected, he made clear that the name contained a full agenda for his pontificate inspired by Saint Francis of Assisi: the poor, the environment and peace. At the top of the list came the poor.

As he recounted his choice of the name, the new pope explained that Brazilian Cardinal Claudio Hummes leaned over and whispered in his ear, “Don’t forget the poor.” Then, the newly elected pope recalls, he immediately thought of Francis of Assisi.

Saint Francis is also known as Il Poverello, that is, “the poor man” or more precisely, “the little poor man.” He identified with the poor, cared for them, most notably the lepers, and preached God’s love to them.

His followers were known as the Friars Minor, that is, the lesser or little brothers, an expression in his day of class solidarity with the minores, the people without political power, but also an expression of identification with Christ who is “humble and gentle of heart.”

In just two years, Pope Francis has shown his own devotion to the poor. His first trip was to meet African refugees on the small Mediterranean island of Lampedusa. He chose to publicly wash the feet of criminals on Holy Thursday. His agenda for the Synod of Bishops was replete with all the troubles of poor families. In the most recent expression of care for the homeless, the Vatican announced he is opening a hostel for them close to the little city-state he heads. Before that, he had erected showers for them within Vatican City.

With the release Thursday of the pope’s new encyclical on the environment, or as he writes, “care of our common home,” many are wondering, where do the poor stand in his view of the environmental crisis? Pope Francis’ response has a biblical ring. Hosea wrote,

There is no faithfulness or kindness,

and no knowledge of God in the land

“Human environment and the natural environment,” reads “Laudato Si’,” “deteriorate together; we cannot adequately combat environmental degradation unless we attend to causes related to human and social degradation,” (No. 48). Land and people suffer injury from the same structural evils: unbridled capitalism, uncontrolled technology and short-sighted politics.

The Holy Father’s view of the poor is unromantic. He identifies the many ways in which they suffer from environmental degradation and climate change: Water, when it is available, is contaminated, fouled by the waste of mines, farms, factories and consumer products. Scarce water supplies are threatened by privatization. The loss of biodiversity threatens not just individual species, but entire ecosystems and the human communities that depend on them.

Whether it is depleted fishing grounds, polluted drinking water or homes leveled by storms in rising seas, the poor suffer the worst consequences of ecological decline.

The encyclical surprises with its description of the ills of today’s mega-cities. The quality of life for hundreds of millions is impoverished by “environmental deterioration, current models of development and the throwaway culture,” it says (No. 43). The deterioration of human ecology and human habitat are as much the pope’s concerns as the loss of the natural environment.

Cities are less and less hospitable to human life. Pope Francis writes, “Many cities are huge, inefficient structures, excessively wasteful of energy and water. Neighborhoods, even those recently built, are congested, chaotic and lacking in sufficient green space. We were not meant to be inundated by cement, asphalt, glass and metal, and deprived of physical contact with nature,” (No. 44).

The pope sees inequality as the result of rampant economic and technological development. There “are signs that the growth of the past two centuries,” he writes, “has not always led to an integral development and an improvement in the quality of life,” especially for the poor. “Some of these signs,” he adds, “are also symptomatic of real social decline, the silent rupture of the bonds of integration and social cohesion,” (No. 46).

The poor have been particularly hurt, he believes, by the social segregation of classes in contemporary society. Indifference to the poor, he asserts, is partly due to “the fact that many professionals, opinion makers, communications media and centres of power, being located in affluent urban areas, are far removed from the poor, with little direct contact with their problems.” He adds, “This lack of physical contact and encounter, encouraged at times by the disintegration of our cities, can lead to a numbing of conscience and to tendentious analyses which neglect parts of reality,” (No. 49).

He concludes, “Today…we have to realize that a true ecological approach always becomes a social approach; it must integrate questions of justice in debates on the environment, so as to hear both the cry of the earth and the cry of the poor,” (No. 49).

The encyclical offers both ethical and policy solutions to the environmental evils and injustices the pope has described. But, I would like to note two religious remedies he offers which address social isolation as a source of environmental injustice. One is theological; the other, spiritual.

The theological vision is of a cosmic family of creatures of the one God. “All of us are linked,” writes Pope Francis, “by unseen bonds and together form a kind of universal family, a sublime communion which fills us with a sacred, affectionate and humble respect,” (No. 89). It is in that lived vision, as in Saint Francis’ fraternity of God’s creatures (Brother Sun, Sister Moon), that we can overcome the alienation from one another, especially the alienation of the advantaged from the poor, and the estrangement of humanity from our earthly home.

Finally, the avenue to environmental and social harmony is found through the cultivation of peace, inner peace and peace with creation. The encyclical sees environmental degradation and social injustice as the result of imbalances within ourselves, among humans and between humans and the natural world.

Inner peace, Pope Francis writes, “is reflected in a balanced lifestyle together with a capacity for wonder which takes us to a deeper understanding of life. Nature is filled with words of love, but how can we listen to them amid constant noise, interminable and nerve-wracking distractions, or the cult of appearances?"

“Many people today sense a profound imbalance which drives them to frenetic activity and makes them feel busy, in a constant hurry which in turn leads them to ride rough-shod over everything around them. This too affects how they treat the environment,” (No. 225).

“Laudato Si’” concludes with this wisdom teaching. “An integral ecology includes taking time to recover a serene harmony with creation, reflecting on our lifestyle and our ideals, and contemplating the Creator who lives among us and surrounds us, whose presence ‘must not be contrived but found, uncovered,’” (No. 225).

Drew Christiansen, S.J., a former editor of America, is Distinguished Professor of Ethics and Global Human Development at Georgetown University. He advised the U.S. bishops in the drafting of their 1991 pastoral statement on the environment “Renewing the Earth,” and later designed and oversaw the bishops’ environmental justice program.