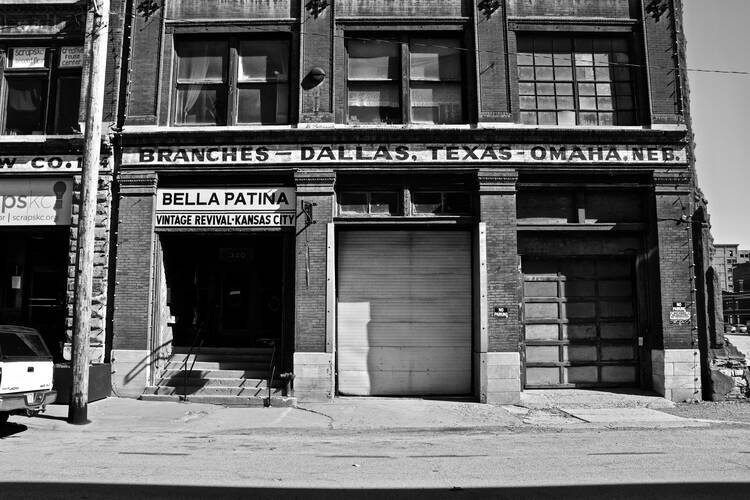 Photo by Darren Hibbs via Unsplash.

Editor’s Note: Division Street ran through Atchison, Kan. It divided the community along racial lines until a local advocacy group, Atchison United, lobbied to change it. But some Catholics in the city resisted the effort.

Kevin Hill, an attorney and member of Atchison United, speaks with Gloria Purvis about how racism has become politicized in the United States, including in small cities like Atchison with sizable Catholic populations. Kevin and Gloria recount the story of George Johnson, a Black man from Atchison who was lynched by a white mob in 1870, and make the case that racism is a fundamental life issue for Catholics.

Gloria Purvis: How did Atchison United get started? What prompted you to get involved with them?

Kevin Hill: Atchison United started after the murder of Ahmaud Arbery. There were several like-minded individuals in town from all different types of faith groups that got together for a march in his memory. We all decided and agreed that marches are fine in addressing the evils that are happening in our society, but we need to go another step further and we need to look at how we as a group can bring about some tangible change in our community.

At the end of the walk, that’s when the discussion started on [how] we need to do more than walk. We need to see some tangible change. I think the Unity Street [versus] Division Street issue was the first major thing that we tackled at that time.

We all decided and agreed that marches are fine in addressing the evils that are happening in our society, but...we need to look at how we as a group can bring about some tangible change in our community.

GP: Tell us about this street name change. Why was it called Division Street? Why did you all feel the need to try to change the name of the street?

KH: Atchison, for those who are not familiar, is a river town about 40 minutes from Kansas City. It has a long history, a lot of “exodusters” [migrating from the South] settled in the area. And so Division Street originally was named as a dividing line between the city limits of Atchison and the county of Atchison. But over time it took on a different significance, and the significance was racial. And so over the years, there were attempts at changing the name of Division Street, but those attempts had failed. The city commission over the years had rejected a lot of attempts by a lot of people to change the name, so that became our first major project. There were heart-wrenching stories from elders in the community about how the name of that street had such an impact on them.

With those testimonies from the elders of the community and a lot of groundwork, which included petitions, we had a prayer on Division where we lined Division Street and prayed for racial harmony. After all of those efforts, we presented to the city commission and received a five-to-zero vote to change the name of Division. The street is now known as Unity Street.

There were heart-wrenching stories from elders in the community about how the name of that street had such an impact on them.

GP: I was surprised to find out—although I should not have been [surprised]—that there were people who actually opposed the name change, even though there had been testimony about the problem with calling it Division Street, [and with] segregating the Black community over here. And we know that this segregation oftentimes came with substandard facilities, substandard treatment, stigma and all of those things. And yet there are people in 2021 that opposed the street name change.

KH: It was very disheartening to see, including [among] Catholics in the community. [The opponents] would always preface it by saying, “I don’t care what the street name was, but...” and then everything that followed was just an attack on why we were changing it. And I remember making the comment that you really need to question the motives of people who were so attached to a street that was named after basically a mathematical term. I mean, Division wasn’t named after a prominent family; it was named Division Street. And, after hearing the testimonies of how it impacted the African-American community of Atchison, to still be opposed to it was very disheartening to hear. It showed a lot of people’s true colors, I think.

After hearing the testimonies of how it impacted the African-American community of Atchison, to still be opposed to it was very disheartening to hear. It showed a lot of people’s true colors.

GP: I’ll be speaking at Benedictine College, for some of our listeners who are unaware about racism being a pro-life issue. What can we say to those priests and to those Catholics with this mindset? This is, in my opinion, an anti-Gospel message. This is not what we believe as Catholics. How would you counsel people in this regard?

KH: I think education is a huge key to having your mind open.... [P]riests and laypeople [are called] to educate themselves on the issue of racism. And I think that’s important. I think a good example is having the city commission hearing the testimonies from elders in the community. It was so compelling to see what that impact had been. You have white priests whose ministry is addressing communities that may have maybe just 1 percent of members who are people of color. So when you’re in a rural area, you’re in a community where you don’t have exposure to people of color, and you need to get out of your comfort zone and listen to people of color, to listen to what their experience has been and make amends for what can only be called ignorance.