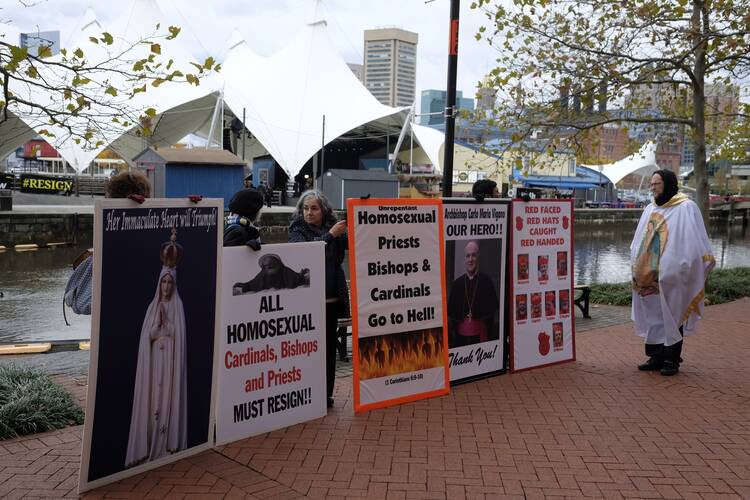 BALTIMORE (CNS) — A Catholic advocacy group known for its critical comments about Catholic leaders said Baltimore city officials violated their religious rights in denying approval for a rally it planned near the hotel where the U.S. bishops’ will meet in November.

Among those testifying were survivors of clergy sexual abuse who want to speak at the “prayer rally” that the conservative media outlet planned for Nov. 16 at a city-owned waterfront pavilion adjacent to the hotel where the bishops will meet.

The bishops’ fall general assembly is scheduled for Nov. 15 to 18.

Church Militant had promoted that Steve Bannon, former chief strategist for Donald Trump, and far-right polemicist Milo Yiannopoulos would speak at the event.

Yiannopoulos testified during the hearing, saying he wanted to speak because he was raped by a Catholic priest and wants to encourage other abuse survivors to “confront the enablers and abusers,” The Associated Press reported.

He agreed to be identified as an abuse victim in court, explaining that he has written about his ordeal in the past.

The city said in a court filing that it instructed the contractor that operates the pavilion to cancel the event, “out of legitimate fear that it would incite violence in the heart of downtown Baltimore.”

It said that Yiannopoulos’ appearances elsewhere have attracted large crowds, and counterprotesters and have led to violence and property damage.

It also said that Bannon has called “for violence against government officials,” explaining that he was banned from Twitter after he posted a video online Nov. 5, 2020, in which he suggested that Dr. Anthony Fauci and FBI Director Christopher Wray should be beheaded. “I’d put the heads on pikes,” he said.

Church Militant had promoted that Steve Bannon, former chief strategist for Donald Trump, and far-right polemicist Milo Yiannopoulos would speak at the event.

The city also argued that the Baltimore Police Department was already understaffed and would be seriously challenged to respond to violence that might result from the event.

Yiannopoulos told the court he has toned down his speeches in recent years and that he doubts any counterprotesters would show up at an event such as a rally planned by St. Michael’s.

“The risk seems to me near zero. There’s no one coming to protest me these days, which is a great relief,” said Yiannopoulos, who now is a paid columnist for St. Michael’s Media, The Associated Press reported.

St. Michael’s said in its lawsuit it had been working with the private company that manages the venue for the city for weeks until the firm told the group in August that city officials had ordered that the contract be terminated.

The city said in a court filing that it instructed the contractor that operates the pavilion to cancel the event, “out of legitimate fear that it would incite violence in the heart of downtown Baltimore.”

The group has said the rally is deliberately being held during the bishops’ meeting because victims of clergy sexual abuse and “concerned Catholics have been made to feel invisible and unheard by their bishops.”

The lawsuit said Michael Voris, founder and CEO of St. Michael’s, spoke with City Solicitor James Shea about the cancellation in mid-August. Shea, the lawsuit said, told Voris that he had seen reports that St. Michael’s had “ties” to the Jan. 6 violence at the U.S. Capitol.

“Mr. Voris immediately told Shea that this was categorically false and asked for the source of such reports. Shea responded that he had not found any such reports himself, but that unspecified ‘people’ had told him such reports were widely available on the internet,” the lawsuit said.

The city has argued in court filings that the event poses a public safety threat. It also said that Voris and other leaders of the group cheered on the hundreds of people that stormed the U.S. Capitol Jan. 6.

In addition, the city said that Church Militant was “an active propagandist” for baseless claims that the 2020 presidential election was stolen from Donald Trump.

In such a scenario, the city concluded, “the culmination of a ‘perfect storm’ of preexisting issues -- between speakers who actively incite disruption, an understaffed police force, and a location that could result in damages to the downtown area of the city -- lends credence to the argument that defendants have the potential to suffer much more harm than the plaintiff’s alleged ‘harms’ in this matter should the event occur.”

Church Militant held a rally at the same pavilion during the bishops’ meeting in November 2018 without incident. About 300 attended the rally, far fewer than the group originally projected.