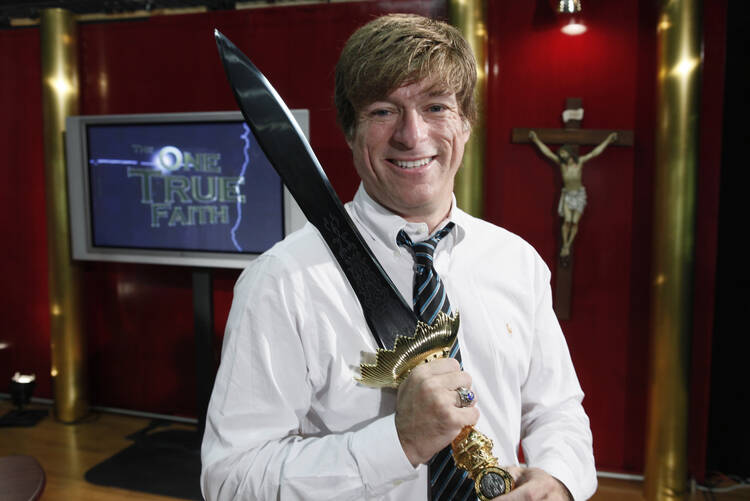 In this Oct. 11, 2010 file photo, Michael Voris holds a sword used when he records for RealCatholicTV.com in a studio in Ferndale, Mich. (AP Photo/Paul Sancya)

A media outlet seeking to stage a rally during a U.S. bishops’ meeting in Baltimore claims city officials canceled the event because they disapprove of its religious message. The city says the gathering poses a threat to public safety, claiming the fringe group cheered on rioters who stormed the U.S. Capitol in January.

The event planners are asking a federal judge to decide whether the city is trampling on their First Amendment rights. U.S. District Judge Ellen Hollander scheduled a hearing Thursday on a lawsuit filed Sept. 13 by St. Michael’s Media against the city, Baltimore Mayor Brandon Scott and City Solicitor James Shea.

In a court filing, the city says it instructed the contractor that manages the pavilion to cancel the event “out of a legitimate fear that it would incite violence in the heart of downtown Baltimore.”

In a court filing, the city says it instructed the contractor that manages the pavilion to cancel the event “out of a legitimate fear that it would incite violence in the heart of downtown Baltimore.”

“And for a city like Baltimore, with a police department already stretched thin with a well-documented police officer shortage, the decision to cancel an event featuring a speaker who invites additional demonstrators, counter demonstrators, expenses, and potential violence is more than reasonable,” city attorneys wrote, referring to Yiannapolous.

In 2017, a confidant of Pope Francis specifically mentioned ChurchMilitant.com in an article condemning the way some American evangelicals and Roman Catholics mix religion and politics. The Rev. Antonio Spadaro’s article in a Vatican-approved magazine said the media outlet framed the 2016 presidential election as a “spiritual war” and Trump’s ascent to the presidency as “a divine election.”

The pavilion is across from a hotel where the U.S. Conference of Catholic Bishops is scheduled to hold its national meeting Nov. 15 to Nov. 18.

In 2017, a confidant of Pope Francis specifically mentioned ChurchMilitant.com in an article condemning the way some American evangelicals and Roman Catholics mix religion and politics.

St. Michael’s said it deliberately picked the date and location for its rally to coincide with the bishops’ meeting. The group also said it held a peaceful, city-permitted rally at the same site during the bishops’ national meeting in 2018.

The group is asking the judge to rule that canceling its rally violates its constitutional rights to free speech, religious expression and free assembly. It also wants Hollander to order the pavilion manager to “honor its contractual relationships” with St. Michael’s.

St. Michael’s lawsuit said its founder and CEO, Michael Voris, spoke with Shea about the cancelation in August. The city attorney told Voris that his office had seen reports that St. Michael’s had “ties” to the Jan. 6 Capitol riot, the lawsuit says.

“Mr. Voris immediately told Shea that this was categorically false and asked for the source of any such reports. Shea responded that he had not found any such reports himself, but that unspecified ‘people’ had told him such reports were widely available on the internet,” the suit says.

The city describes Church Militant as “an active propagandist” for baseless claims that the 2020 presidential election was stolen from Trump and that Church Militant “promoted and exalted” the rioters who stormed the Capitol.

In its court filing, the city describes Church Militant as “an active propagandist” for baseless claims that the 2020 presidential election was stolen from Trump. Church Militant “promoted and exalted” the rioters who stormed the Capitol, and Voris glorified the insurrectionists during a broadcast the night of Jan. 6, the city attorneys wrote.

St. Michael’s claims the city also wanted to cancel the rally because its leaders prefer the bishops’ adherence to “modern mainstream Catholic doctrine.” The city said the group’s religious convictions have nothing to do with the cancelation.

The city points to another pending lawsuit as proof that “property damage and violence is a real and valid concern.” A group of business owners sued the city of Baltimore over property damage during protests after a black man, Freddie Gray, died in police custody in 2015. The city says it faces a possible multimillion-dollar judgment if the business owners prevail in their federal case.

Correction, Friday, Oct. 1: An earlier version of this headline said that a court had cancelled the rally. It has been updated to reflect that city officials cancelled the rally, a decision that Church Militant is contesting in court.

Michael Kunzelman - Associated Press
Show Comments ()
Join the conversation: Login or create an account
Before you can comment, you need to update your profile to include your first and last name, as required in our comments policy. Then reload this page and you'll be set up for commenting. Update your profile