Some Catholics are still skeptical of the Covid-19 vaccine. And James Carville is losing his patience with them. 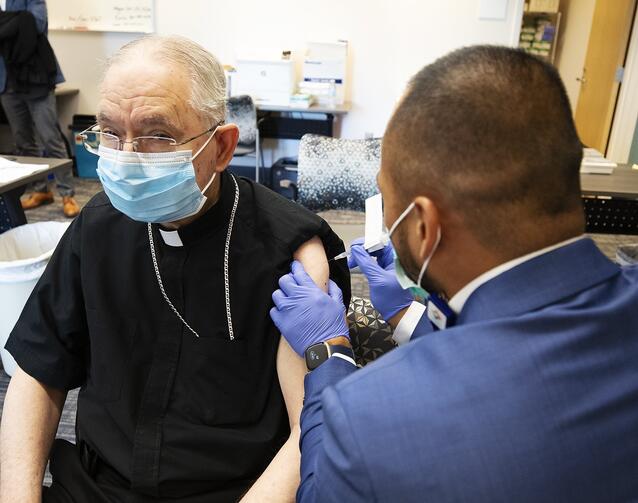 This week, on America Media’s “Behind the Story” video series, Matt Malone, S.J., the president and editor in chief of America,spoke with James Carville, a long-time political consultant, author and the co-host of the “Politics War Room” podcast, about the moral obligation Catholics have to get the Covid-19 vaccine.

Below is an excerpt from that conversation. It has been edited for style and clarity.

Matt Malone, S.J.: One of the reasons that we’re talking is because your area of the country is having trouble getting folks vaccinated. There are a lot of reasons for that. Father John Carville, your cousin from the Diocese of Baton Rouge, wrote a piece recently addressing some of the arguments that people are making about why they’re not getting vaccinated. What’s going on from your perspective?

James Carville: I just love John to death. He’s committed to the church first in every sense. His piece, which is in the Baton Rouge diocese newspaper, was in response to, in my opinion, a particularly odious Catholic attorney general telling people how to get around vaccine requirements or whatever.

They say it’s “permissible,” right? Not only is it permissible, but it’s the morally right thing to do.

MM: How much of it do you think is a communication issue? It seems to me that we have the wrong priority here. They think that this question is some kind of deep theological thing or that it’s an ethical quandary, when really what Catholics need to know is: Should you get vaccinated? And the answer is yes.

Growing up in Catholic schools, you were always taught that you were subservient to something larger than yourself. You’re an individual, and no one denies that, but you have an allegiance and fidelity to the church and to the country. And I just find that we’re losing that sense when I hear people like the attorney general in Louisiana talk about individual rights and my right to be vaccinated or not. I think there’s an airtight case to be made that in our tradition you have an obligation to other people, that you’re not the center of all of this.

MM: I think it’s a little like when people say to me, “I didn’t vote, I don’t have to vote. I have a right not to vote.” And, of course, you do have a right not to vote, but the point is you should because it’s not just about you. Right? And that is also baked into Catholic social teaching. The Constitution starts with “we” and not “I,” and the Catholic social teaching also begins with “we” and not “I.” It begins with the common good.

JC: Yeah, but if you don’t vote people would say that that’s not good citizenship. But no one would say if you don’t vote, that’s a sin. I think not getting vaccinated is more severe. I like the word obligation. Obligations are like anything else in that there are some that are exalted. And there are some obligations that are more expected of people than others. And I think vaccines or wearing a mask actually fall into that high tier of obligations.

I think there’s an airtight case to be made that in our tradition you have an obligation to other people, that you’re not the center of all of this.

MM: And you know, if you’re not getting vaccinated, and you’re going out and having contact with people, then it seems to me that it’s kind of like running a red light. If it is an obligation as you say, you’re responsible in a moral sense for the consequences of that.

JC: Speaking for myself, not America magazine, I think that a lot of it is these right-wing Catholics who fund a lot [in the church]. And a lot of people are scared to speak out. The vaccine and mask-wearing fell along a political line. I think some of these bishops are facing very, very difficult circumstances. And in most cases, they do love the church. [In] most cases they’re trying to discharge their duties, but they have a lot of pressure coming from a lot of different directions.

MM: I think that in many ways, like the rest of the church and the rest of the country we’re living in information vacuums and we’re hearing from one pole or the other. Here at America, we’ve been talking about vaccines and encouraging people to understand it as part of our obligation to the common good. But I often suspect we’re preaching to the choir. Because if you’re reading America, you probably already agree with us. So how do you break through that?

And it just becomes so comfortable talking to your own kind. You become so smug and sure of yourself, believing that we’re smart and they’re stupid, and we’re vaccinated, and they’re not. But that’s not really doing us any good. You have to convince people in a way that they understand. And I think we lose that sometimes in politics and also in religion.

You become so smug and sure of yourself, believing that we’re smart and they’re stupid, and we’re vaccinated, and they’re not. But that’s not really doing us any good.

JC: I don’t think the modern church is anti-science. For one thing, the pope is clearly on board with the entire climate issue. But there’s a certain part of the church that resists all of this. I think it’s highly unfortunate, but when you have a universal church, you have to deal with a lot of different things.

MM: I guess what I’m thinking of is that science is often used as a cudgel. It cannot be “you have to trust the science or you’re dumb.” Because what you’re really responding to is fear. Right? It’s fundamentally about fear.

JC: It is, but I think that a good, strong church teaching could get through to some people. When I see some of these preachers that talk about vaccines being from the devil and then they get sick, like Cardinal [Raymond] Burke, I’m glad that he survived and I don’t want anybody to die, but are you kidding me? How do we have an educated person preaching against vaccines? I mean, everything in the theology and the tradition and the teachings is 100 percent supportive of these vaccines. I’m kind of losing patience.

Everything in the theology and the tradition and the teachings is 100 percent supportive of these vaccines. I’m kind of losing patience.

MM: Who is a credible messenger here? For Catholics, it’s probably our bishop or our priest. Or is it no longer the case that one person or a small group of leaders can speak to the whole country, the whole church?

JC: In terms of talking to Catholics, we don’t need America magazine to promote vaccines; we need Church Militant to say, “There’s everything right with being vaccinated.” It looks like we should be able to come together just on that one thing. You have to dig in and build bridges, you know?

And we should remember that Jesus loved to be with sinners. He didn’t much like holy people. If he ever came to New Orleans, the first place he’d go [would be] the prostitutes and the French Quarter. I think he’d walk right past the cathedral. I think that’s a challenge for Catholics and a challenge for people. We believe that people of faith are interconnected in some kind of way, and I think that’s a good thing.

James Carville is a long-time political consultant, author and the co-host of the “Politics War Room” podcast.