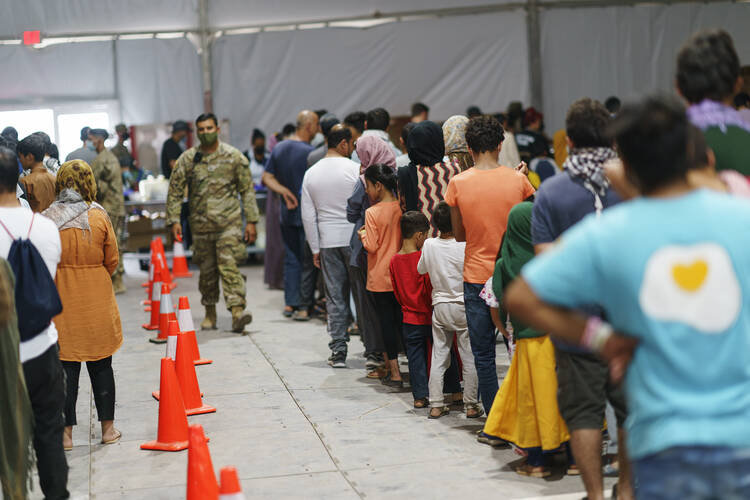 Afghan refugees line up for food in a dining hall at Fort Bliss' Doña Ana Village, in New Mexico, where they are being housed. (AP Photo/David Goldman)

WASHINGTON (AP) — The Biden administration said the U.S. would take in 125,000 refugees and their families next year, fulfilling an earlier pledge to raise a cap that had been cut to a historic low under his predecessor. Biden originally announced his commitment to this increased cap at a Jesuit Refugee Service event celebrating the organization’s 40th year of service on Nov. 14, 2020.

The White House set the proposed annual cap in a report to Congress, saying there was an unprecedented number of displaced people around the world because of conflict, humanitarian crises and climate change. Administrations make an annual recommendation in consultation with lawmakers.

Officials had earlier announced their intention to raise it to 125,000 for the fiscal year that starts Oct. 1.

The Biden administration said the U.S. would take in 125,000 refugees and their families next year, fulfilling an earlier pledge to raise a cap that had been cut to a historic low under his predecessor.

“The United States is committed to leading efforts to provide protection and promote durable solutions to humanitarian crises, to include providing resettlement for the most vulnerable,” the State Department said Monday in releasing the report.

In setting the target, the administration said it would focus on several key groups, including Central Americans, Afghans at risk due to their affiliation with the United States, LGBTQ refugees and members of the predominantly Muslim Uighur ethnic group who are the targets of Chinese government campaign to eradicate their culture.

President Donald Trump capped the number of refugees at 15,000, the lowest since the 1980 Refugee Act took effect. President Joe Biden faced criticism when he was slow to raise it upon taking office, eventually settling at 62,500 under pressure.

The Jesuit Refugee Service has encouraged Biden to raise the cap from 125,000 to 200,000 to better welcome more displaced refugees.

Despite the recent evacuations from Afghanistan, the U.S. will fall short of that number by the time the fiscal year ends on Sept. 30.

Pope Francis responds to attacks from EWTN, other church critics: ‘They are the work of the devil.’
Gerard O’Connell

The Jesuit Refugee Service has encouraged Biden to raise the cap from 125,000 to 200,000 to better welcome more displaced refugees.

In a statement, Joan Rosenhauer, Executive Director of Jesuit Refugee Service/USA, said, “The number announced today is a step in the right direction and signals the President's commitment to return to our nation's moral leadership and track record of welcoming refugees. ... [However,] in light of President Biden’s longstanding commitment to resettling refugees, we expected the Biden Administration to put forth a more ambitious number. Raising the number to 200,000 would have allowed for the accommodation of a significantly higher total number of refugees from Afghanistan and around the world.”

America staff have contributed to portions of this report.

Associated Press
Show Comments ()
Join the conversation: Login or create an account
Before you can comment, you need to update your profile to include your first and last name, as required in our comments policy. Then reload this page and you'll be set up for commenting. Update your profile