We have to be willing to talk about gender and ordination. But let’s first understand the tradition. 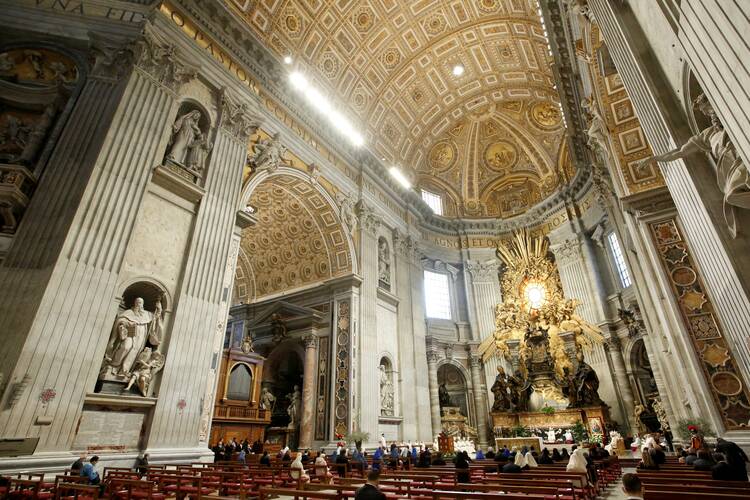 St. Peter's Basilica is pictured during the Mass of the Lord's Supper on Holy Thursday at the Vatican April 1, 2021. (CNS photo/Remo Casilli, pool via Reuters)

In the late winter of 1995 Peter Hans Kolvenbach, superior general of the Society of Jesus, convened a general congregation—the global governing body of the Jesuits. Usually a general congregation is convened following the death or resignation of the superior general, in order to elect his successor. But Father Kolvenbach was convening the 34th General Congregation not to elect a new superior but to ask the delegates of the global Society to reflect more deeply on their response to the “signs of the times,” especially in light of the Society’s commitment to “a faith that does justice.”

Among the General Congregation’s formal communiques was Decree 14, “Jesuits and the Situation of Women in Church and Civil Society,” in which the delegates wrote: “We Jesuits ﬁrst ask God for the grace of conversion. We have been part of a civil and ecclesial tradition that has offended against women.” The delegates then called for a conversion of the whole Society of Jesus, asking every Jesuit “to listen carefully and courageously to the experience of women” and to take specific steps to address the injustices that women experience in nearly every area of human life.

The general congregation’s call for solidarity and advocacy set off a burst of apostolic action throughout the Society of Jesus that continues to this day. America Media has been no exception. I am pleased to report that America Media has recruited and hired more women in the last decade than it did in the whole previous century—several of them serving in the highest ranks of the organization. Even more, America has made a commitment to sustain an intense editorial focus on questions related to women in the life of the church and larger society. One of our proudest moments as an organization came in October 2013, when America became the first Jesuit publication in history to publish an issue that had been edited and written entirely by women.

I am pleased to report that America Media has recruited and hired more women in the last decade than it did in the whole previous century—several of them serving in the highest ranks of the organization.

The present issue is our latest step on that journey. It has not been edited and written entirely by women, though Kerry Weber, our talented executive editor, has done the lion’s share of the work of preparing the content for publication. We decided that a crucial next step involved widening the conversation. And that means one other departure from the 2013 issue. Then we made a conscious choice not to cover the question of the ordination of women to holy orders. As Ms. Weber explained in her introduction to that issue: “We understand that many Catholics feel passionately about the topic of priestly ordination of women. [Yet] in trying to focus attention on or divert attention from this ‘closed’ topic, Catholics have frequently sidelined many other issues of importance.” In other words, when we are talking about the ordination of women, we too often aren’t talking about anything else—the many ways women do or could contribute to the church now without being ordained.

I think that point holds. At the same time, we should always heed the words of the Lord and “be not afraid” to talk about challenging questions and how they affect our faith lives. So we have decided in the present issue to begin a conversation about the topic of ordination and gender. As a ministry of the church, of course, we begin any such conversation with the teaching of the church, as articulated by its magisterium. And so our conversation begins with an article from our archives by the late Cardinal Avery Dulles, S.J., which explains in clear and precise language just what the magisterium teaches about this matter and why. Regardless of whether you agree with its contents, I can assure you that it is the best presentation of the magisterium’s teaching that has ever been produced in English. We have then invited two distinguished theologians to offer their responses to Dulles’s article. And, of course, you are welcome to join the conversation.

Decree 13 of General Congregation 34 was issued one year after St. John Paul II issued his apostolic letter reaffirming the centuries-old teaching of the church that ordination to the priesthood is reserved to men. I do not know for certain, but I suspect that this sequence was not a coincidence. And Cardinal Dulles delivered the lecture on which his article is based in 1996, the year after General Congregation 34. I suspect that this sequence, too, was not a coincidence. It seems apparent that these three ecclesial characters were in a public conversation with one another.

As well they should have been. At the end of the day, even the most settled teachings of the church must still be received and appropriated by the faithful if those teachings are to be a true leaven for communion and evangelization. One primary way that happens is through conversation.