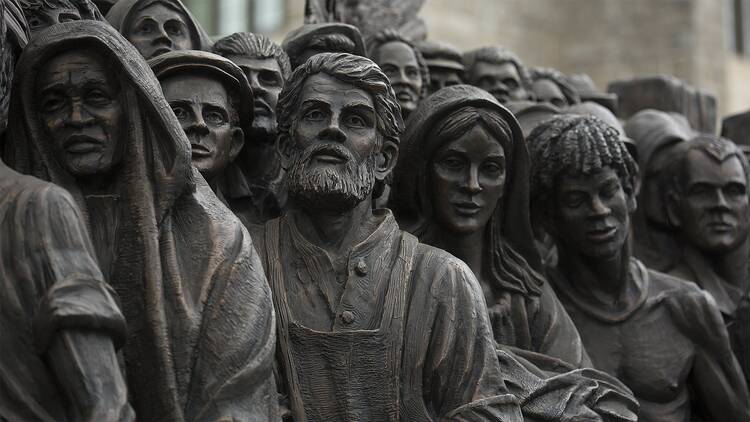 The sculpture "Angels Unawares" is seen at The Catholic University of America in Washington on Sept. 27, before touring the United States over the next year. The life-size sculpture, which depicts a group of migrants and refugees crowded on a boat, is a replica of the one Pope Francis unveiled in St. Peter’s Square at the Vatican during the 2019 World Day of Migrants and Refugees. (CNS photo/Tyler Orsburn)

During a campaign rally in Duluth, Minn., on Sept. 30, President Trump claimed that electing Joe Biden as president would “turn Minnesota into a refugee camp,” an unsubtle reference to the Somali immigrants in the state. On the same day, the Trump administration submitted to Congress its recommendation for the number of refugees admitted to the United States in the new fiscal year: 15,000, an all-time low.

This policy will be devastating for the 1.45 million refugees who have been identified as most vulnerable by the U.N. refugee agency (U.N.H.C.R.) and recommended for resettlement to countries like the United States. Further, the kind of rhetoric and falsehoods used by Mr. Trump vilifies refugees and strips them of their humanity.

The kind of rhetoric and falsehoods used by Mr. Trump vilifies refugees and strips them of their humanity.

Fortunately, there was a different message on Sept. 27, the 106th World Day of Migrants and Refugees, when the church is called to acknowledge issues of migration and displacement. Pope Francis released a message emphasizing that we can begin to understand the lives that others have lived only by listening to them. By taking the time to learn about our brothers and sisters, we can start to know who they are.

As of the end of 2019, there were 26 million people who had been forced to flee their homes because of persecution, conflict, violence or human rights violations, according to U.N.H.C.R. Of those, 820,000 are Somali refugees who have fled decades of armed conflict in Somalia, compounded by drought and other natural disasters. Minnesota is home to many of them, accounting for over 3 percent of refugees arriving in the United States.

Kaadi Ali Ibrahim was one of the hundreds of thousands of Somali refugees who fled drought and conflict from 2009 to 2011 and who now live in Melkadida refugee camp in Ethiopia. He not only lost his home but his livelihood as well. As Mr. Ali Ibrahim journeyed through the desert to reach safety, his camels, cattle and goats—his only sources of income—died or were seized by armed groups.

Refugees contribute greatly to the United States and have continued to support their new communities during the Covid-19 crisis. More than 176,000 now work in health care.

To hear Mr. Ali Ibrahim’s story is to better understand the challenges that refugees face as they leave behind all that they have and attempt to rebuild their lives. I have visited refugee camps and listened to the stories of mothers, fathers and children who endured unimaginable horrors that left them with no choice but to literally run for their lives.

In eastern Chad—home to more than 300,000 refugees from the Darfur region of Sudan who fled their homes beginning in 2003 and now have lived dispersed among 12 camps for almost two decades—I met a young woman whom I knew only as Noha. She was 5 or 6 years old when she left Sudan. She remembers the long walk to Chad as warplanes circled, shooting indiscriminately at civilians. Noha’s story is not unique. If you speak to anyone her age in the camps, they will recount a similar journey. And like a lot of young people, Noha values education and has aspirations for a career. Her favorite subject is English, and she wants to be a doctor.

Upon their resettlement, refugees contribute greatly to the United States and have continued to support their new communities during the Covid-19 crisis. According to the New American Economy Research Fund, more than 176,000 refugees now work in health care across the United States. Moreover, a 2015 analysis by N.A.E. found that 2.3 million refugees in the United States earned a collective $77.2 billion in household income annually and contributed $20.9 billion in taxes. This study also found that refugees are more likely to start businesses than are non-refugee immigrants or the U.S.-born population, and more than 84 percent of the refugees who had been in the country for 16 to 25 years had completed the process of becoming citizens.

As the presidential campaign enters its final weeks, I implore the Trump administration to consider the humanity of refugees and suspend the harmful rhetoric. The World Day of Migrants and Refugees reminds us that they are, in the words of Pope Francis, “like Jesus Christ, forced to flee.” We can still model our public policy and our language in the image and likeness of Jesus Christ himself. 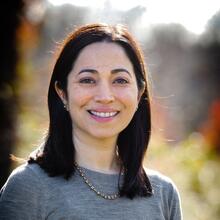 Giulia McPherson is the director of advocacy and operations at Jesuit Refugee Service/USA. She has more than 15 years’ experience working with international development and humanitarian assistance organizations.

@GiuliaMcPherson
Show Comments ()
Join the conversation: Login or create an account
Before you can comment, you need to update your profile to include your first and last name, as required in our comments policy. Then reload this page and you'll be set up for commenting. Update your profile