Letters: Racism and representation in our church 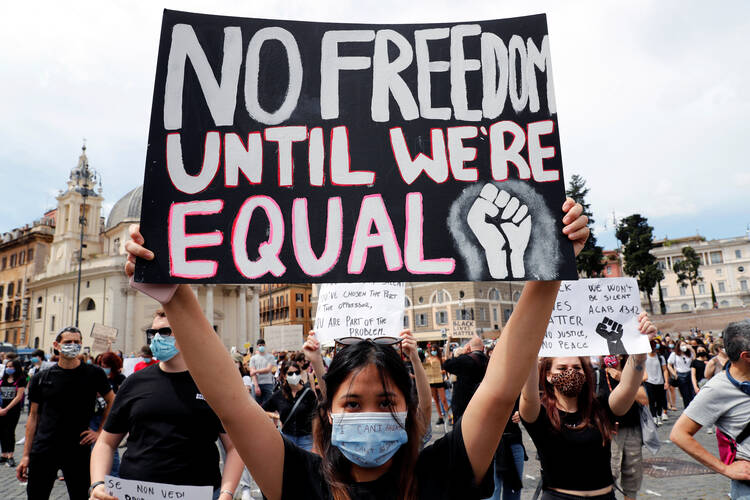 A demonstrator holds a placard as she attends a protest against racial inequality in Rome June 7, 2020, in the aftermath of the May 25 death of George Floyd while being detained by Minneapolis police. (CNS photo/Remo Casilli, Reuters)

I am an African-American Dominican friar down in New Orleans. I read every word of your essay, “A Letter to My Fellow White Americans” (July 2020). Your story conveyed a lot of empathy and hopefully will connect with people who feel that racial issues simply spring from weak arguments and complainers.

I was born in a Black Catholic ghetto in New Orleans in the middle of the last century. My entire life has been vulnerable to being treated solely on my color.

As a child, I was touched by the life of St. Martin de Porres, O.P. My identification with his dark skin combined with grace brought me to the Dominican Order. I was blessed to have a good novice master in that he never objectified me but simply treated me like a human being. That changed as a professed brother. Formators psychologized me out of the order. I didn’t fit their notion of a Black person. My undergraduate degree in Spanish was seen as weird, and I was deemed not intelligent enough to be in the order. Further, something had to be wrong with me in my willingness to live with white people.

When seeking housing for a doctorate at Columbia University in New York, an Eastern Province prior noticed my color on a newsletter photo and phoned my provincial declaring that he “did not want a Black guy in their priory.” During my four years of study, it pained me that I would not be welcomed in a New York Dominican priory.

When in San Francisco, I was praying in a Dominican church. The priest peeped out of the sacristy and 10 minutes later two African-American police officers arrived. They pretended they were not interested in my presence and left for their patrol car parked outside the church. Minutes later, I went out and told them I intuited that they came because of a call by the priest. The police admitted it and jovially chuckled that white people can’t conceive of a Black male praying.

These examples are not meant to point a finger at my brother Dominicans. However, it’s important to note that religious orders rarely look at their own participation in a racist culture.

In this time of our nation’s increased awareness of dismantling white supremacy, I am curious if America magazine has considered any efforts to diversify its staff and editorial contributors. A 2014 Pew study reported that the U.S. Roman Catholic Church is 59 percent white, 34 percent Hispanic/Latino, 3 percent Black, 3 percent Asian and 2 percent other. America appears to have a writing and editing staff that is overwhelmingly white. Diversity at America seems limited to gender but far less so race, with some exceptions. While this gap between the church, and the magazine’s, racial composition is not limited to America and is shared by other leading Roman Catholic weeklies and monthlies, I encourage you to take a leadership role in the prioritization of more representative racial composition of your staff. It would be welcomed to hear one of the Roman Catholic Church media leaders like yourself address this most embarrassing 21st-century gap.