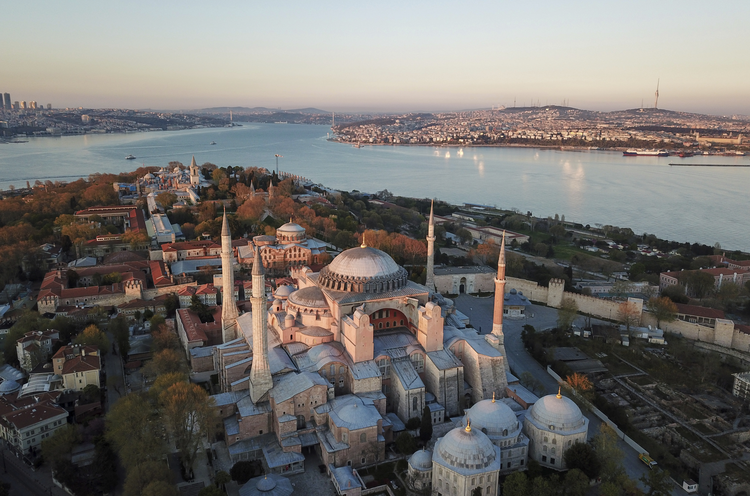 An aerial view of the Byzantine-era Hagia Sophia, one of Istanbul's main tourist attractions in the historic Sultanahmet district of Istanbul, Saturday, April 25, 2020. The 6th-century building is now at the center of a heated debate between conservative groups who want it to be reconverted into a mosque and those who believe the World Heritage site should remain a museum. (AP Photo)

ANKARA, Turkey (AP) — A state attorney on Thursday recommended that Turkey's highest administrative court reject a request that Istanbul's iconic Hagia Sophia, which now serves as museum, be turned back into a mosque, state-run media reported.

The 6th-century structure was the Byzantine Empire’s main cathedral before it was changed into an imperial mosque following the Ottoman conquest of Istanbul. Mustafa Kemal Ataturk, the founder of the modern Turkish republic, then turned into a museum that attracts millions of tourists each year.

Nationalist and religious groups have long been pressing for the landmark, which they regard as an Muslim Ottoman legacy, to be converted back into a mosque. Others believe the UNESCO World Heritage site should remain a museum, as a symbol of Christian and Muslim solidarity.

On Thursday, Turkey’s Council of State, began considering a request by a group that wants Hagia Sophia to revert back into a mosque.

The lawyer of the group argued that the building was the personal property of Ottoman Sultan Mehmet II, who conquered Istanbul, and pressed for the annulment of a 1934 Council of Ministers' decision that turned it into a museum, the Anadolu Agency reported.

A state attorney, meanwhile, argued that the 1934 decision was legal, Anadolu reported. He recommended the request be rejected, arguing that a decision on restoring the structure's Islamic heritage was up to the government, the agency said.

Interview of the Ecumenical Patriarch Bartholomew I
Antonio Spadaro, S.J.

A decision is expected within two weeks.

Greece as well as the Istanbul-based Ecumenical Patriarch Bartholomew I, considered the spiritual leader of the world’s Orthodox Christians, have urged Turkey to keep Hagia Sophia as a museum. Bartholomew warned this week that its conversion into a mosque “will turn millions of Christians across the world against Islam.”

U.S. State Secretary Mike Pompeo waded into the debate Wednesday, urging Turkey to keep Hagia Sophia as a museum “to serve humanity as a much-needed bridge between those of differing faith traditions and cultures.” His comments sparked a rebuke from Turkey’s Foreign Ministry, which said Hagia Sophia was a domestic issue of Turkish national sovereignty.

Built under Byzantine Emperor Justinian, Hagia Sophia was the main seat of the Eastern Orthodox church for centuries, where emperors were crowned amidst ornate marble and mosaic decorations.

Four minarets were added to the terracotta-hued structure with cascading domes and the building was turned into an imperial mosque following the 1453 Ottoman conquest of Constantinople — the city that is now Istanbul.

The building opened its doors as a museum in 1935, a year after the Council of Ministers’ decision.

Provide feedback on this article
Join the conversation: Login or create an account
Before you can comment, you need to update your profile to include your first and last name, as required in our comments policy. Then reload this page and you'll be set up for commenting. Update your profile
Advertisement
More: Islam