Why is there so much violence? We’re all just imitating each other. 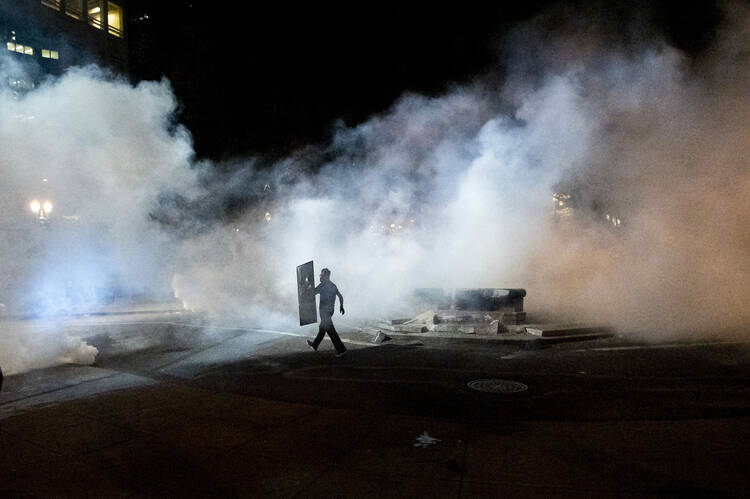 A Black Lives Matter protester carries a shield while facing off against federal officers at the Mark O. Hatfield United States Courthouse on Monday, July 20, 2020, in Portland, Ore. Officers used teargas and projectiles to move the crowd after some protesters tore down a fence fronting the courthouse. (AP Photo/Noah Berger)

George Floyd’s terrible death at the hands of police, and the acts of violence and vandalism that accompanied some of the peaceful protests that followed, shocked the United States and the world. What caused such acts—perpetrated not only by a few members of fringe political groups and a few police officers but also by many ordinary citizens?

René Girard, a leading philosopher of violence, would not be shocked by these acts. He charted how crises in human societies invariably lead to generalized violence—which escalates to extremes through the dynamics of imitation. The United States has been experiencing severe crises in 2020, including the Covid-19 pandemic as well as fractured political and race relations. Girard’s ideas help us to understand why violence (leading to several deaths and millions of dollars of property destruction) appeared and escalated during the recent protests stemming from these crises.

Crises in human societies invariably lead to generalized violence—which escalates to extremes through the dynamics of imitation.

Girard identified human beings as sophisticated imitators. He showed how human desire is intensely social, or mimetic. While this attribute allows us to build social bonds, it also leads to social contagions in which we imitate each other in intense and irrational ways. During these social contagions, multiple points of stimulation create intense desires that are difficult to resist.

As we act on these desires, we validate each other in a perverse feedback loop. We do violent and brutal things we would normally not do. We gain a brazenness that is fueled by the powerful transcendence of imitated violence.

If you ask rioters why they undertake violence, you would get a variety of responses, some claiming that they are merely responding to the violence of others. But such justifications do not really make sense, especially when violence is committed against the lives and property of citizens unrelated to the object of the protests (i.e., the police or the state).

The same phenomenon occurred recently with panic-buying during the coronavirus pandemic. Writing for the Australian website ABC Life, a supermarket employee put it like this: “The question on everyone’s minds at work: Why are they buying everything? One customer summed it up: ‘Because everyone else is.’”

Why commit violence? Because other people are doing it.

Violence, moreover, provides a tremendous “high” and a strong sense of bonding and purpose. If such violence can be directed against an enemy or scapegoat, Girard writes, mob behavior can become the “solution” during times of crisis.

Violence can provide a tremendous “high” and a strong sense of bonding and purpose.

Girard discovered that crises have been commonly resolved across human cultures by directing an accumulation of rivalries and tensions (“all against all”) onto a scapegoat or victim (“all against one”) who is blamed for the crisis. The scapegoating allows for the release of pent-up frustrations, which are channeled into “righteous” violence.

But now we know that engaging in violence only causes more problems. So why do we still do it?

The power of the victim in the modern imagination, alongside the mimetic dynamics of violence, provide an answer. Victims in the ancient world did not have the status that modern victims do. Ancient violence was not done in the name of victims, but rather for honor, conquest, power, riches or vengeance.

Girard argues that the modern world is particularly sensitive to the claims of victims and scapegoats—so much so that we will even fight for them. This is because the complicity of human groups in mob violence has been exposed in modernity. Girard argues this awareness of the victim is the result of the influence of the biblical religions, whose stories and rituals are filled with vindicated victims of violence such as Abel, Joseph, Job, Isaiah’s suffering servant, Jephthah’s daughter and of course, Jesus himself.

The outcry over deaths like that of George Floyd is a sign of advancement, and it also seems true mob violence is losing its power to unite members of a community. Awareness of past injustices, such as extrajudicial lynchings, is part of this change.

At the same time, Girard demonstrates that such an awareness still leaves modern societies vulnerable to mass outbreaks of violence. We do not resolve social crises with the ancient methods of sacrificial killing, but we have developed a new way of justifying and channeling violence: by targeting those accused of being victimizers.

Once the first stone is thrown, then violence is imitated and escalates like a social contagion.

The killing of Mr. Floyd led to widespread moral outrage, which catalyzed and escalated into instances of violent rivalry with the police, who were indiscriminately labeled by some as victimizers. It has also led to attempts to legitimize the belief that because the whole of U.S. society is structurally racist and complicit in victimization, violence is justified to fix the problem. While there remain problems of racism in the United States, this kind of logic is dangerous. It can lead to a war of “all against all.”

Once the first stone is thrown, then violence is imitated and escalates like a social contagion. Such a contagion is difficult to control because it is fed by mutually reinforcing forms of imitation. This spring, the rioting in the United States was accompanied by violent protests in other countries, raising the possibility that the power of modern communications is aiding the spread of mimesis globally.

The violence that accompanied some of the protests in the United States reveals deep fractures in American society. In many cases, it has mimetically escalated beyond peaceful protest, shown by the pleas of Mr. Floyd’s own family to stop engaging in violence in his name. George’s brother, Terrence, proclaimed: “My family is a peaceful family. My family is God-fearing.”

At a protest in Kentucky, protesters and police prayed together. It not only prevented violence but built solidarity. “It was a beautiful thing,” said one participant, Devine Carama. “Obviously the protestors were down there to protest police violence and [bring] value to Black lives. But it was almost as if the police officers in Lexington were showing solidarity with protestors, as opposed to it being a battle. I don’t think that’s what the protestors expected.”

Violence provides a mimetic high that can seem gratifying and effective, but this never lasts. By contrast, nonviolent solidarity, like that expressed in prayer, creates social bonds that are longlasting, based on a constructive common purpose. It is founded on a form of mimesis that seeks to build up the good of all, rather than take some down. It seeks change through peaceful resistance, like that employed by Martin Luther King Jr., to bring about a new consensus and, ultimately, social reconciliation.

It is this positive model of solidarity—not violence and destruction—that will ultimately open up a space to enable change and address the roots of the crises afflicting the nation. 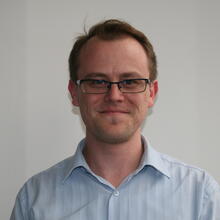 Joel Hodge is a senior lecturer in the School of Theology at the Australian Catholic University, in Melbourne. He is the author of Violence in the Name of God: The Militant Jihadist Response to Modernity and Resisting Violence and Victimisation: Christian Faith and Solidarity in East Timor.