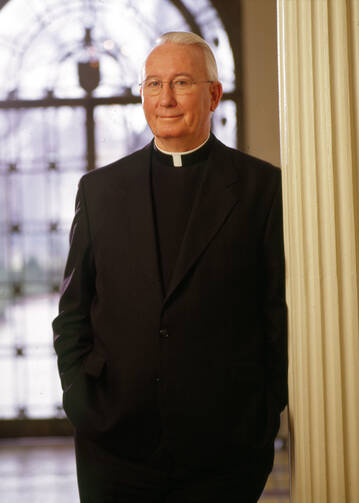 Like many other New Yorkers and America readers, we suffered a great loss on Sunday, March 29, with the death of Joseph A. O’Hare, S.J., editor in chief of America from 1975 to 1984. The editors mourn his death but also share many fond memories of the clever, erudite and joyful man who graced us with his myriad talents for so long. He was a famed raconteur with an impish streak and a powerful intellect; seldom was he vanquished in a battle of wits.

He was a famed raconteur with an impish streak and a powerful intellect; seldom was he vanquished in a battle of wits.

In 1984 America lost Joe to Fordham University, where he would serve as president for 19 years. But he returned to the magazine in 2003, serving America as an associate editor until his retirement in 2009 (with a brief sabbatical as president of his beloved alma mater, Regis High School).

A Special Message from the Editor in Chief
Matt Malone, S.J.

Joe loved being a Jesuit and a priest, and he loved his city. He was a born-and-bred New Yorker, a son of the Bronx (his father was a patrolman in the N.Y.P.D. Mounted Unit), and his writing always evidenced his great affection for the Big Apple. He was also a citizen of the world. After earning a doctorate in philosophy, he taught from 1955 to 1958 and then from 1967 to 1972 in the Philippines. He counted among his friends many famous and influential people—and indeed, one of his favorite quips was “every Jesuit has a celebrity all his own.”

We bid a bittersweet farewell. To quote one of Joe’s signature phrases, “See ya on the other side.” Well done, God’s good and faithful servant.