Priest appeals for more shelters for volcano evacuees in Philippines

Priest appeals for more shelters for volcano evacuees in Philippines 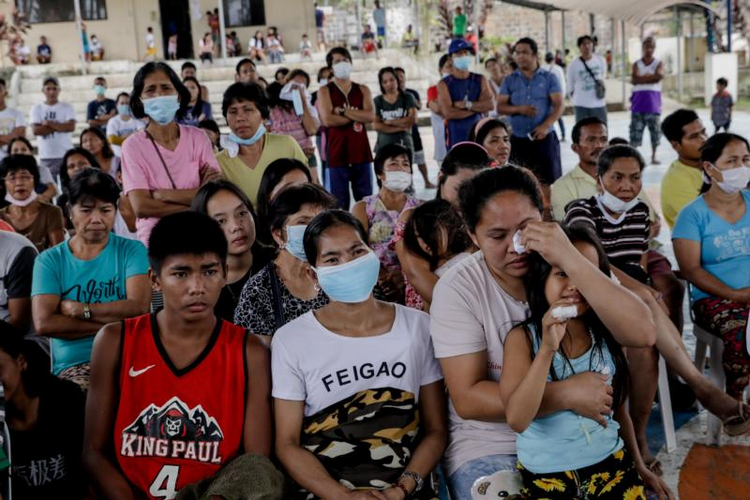 People displaced by the eruption of the Taal volcano attend Mass at an evacuation center in Tagaytay City, Philippines, Jan. 19, 2020. A Catholic priest has appealed for more and better shelters for victims of the volcanic eruption after criticizing a local government response. (CNS photo/Eloisa Lopez, Reuters)

MANILA, Philippines (CNS) -- A Catholic priest has appealed for more and better shelters for victims of a volcanic eruption in the Philippines after criticizing a local government response.

Ucanews.org reported that authorities in Tagaytay, located near the erupting Taal volcano, announced they had set up private spaces for couples to be intimate.

Inside the rooms, where couples can spend hours together after securing permission from authorities, are a mattress and bottled water.

But Father Jerome Secillano of Our Lady of Perpetual Help Parish in Manila said better and additional evacuation centers would serve a greater purpose than "love nest" rooms.

"We need more places to accommodate the thousands still holed up in cramped evacuation centers," said the priest, adding that the "last thing you would think about during a calamity is intimacy."

As of Jan. 22, the National Disaster Risk Reduction and Management Council reported that nearly 72,000 families or more than 280,000 individuals were affected by the volcano. Of that number, about 39,000 families, or 149,000 individuals, were in 493 evacuation centers.

The Philippine Institute of Volcanology and Seismology has maintained an Alert Level 4 over the volcano, meaning a "hazardous explosive eruption" is possible in hours or days.

"We want to thank everyone for helping the evacuees," said the cardinal, noting that the spirit of "Bayanihan," or helping each other, is still very much alive among Filipinos. "It is really nice that many are visiting and helping," he said.

Archbishop Gilbert Garcera of Lipa also noted how people are still smiling despite their situation. "This is the Christian life," he said. "We will rise again."

Show Comments ()
Comments are automatically closed two weeks after an article's initial publication. See our comments policy for more.
Provide feedback on this article
Join the conversation: Login or create an account
Before you can comment, you need to update your profile to include your first and last name, as required in our comments policy. Then reload this page and you'll be set up for commenting. Update your profile
Advertisement
More: Climate Change