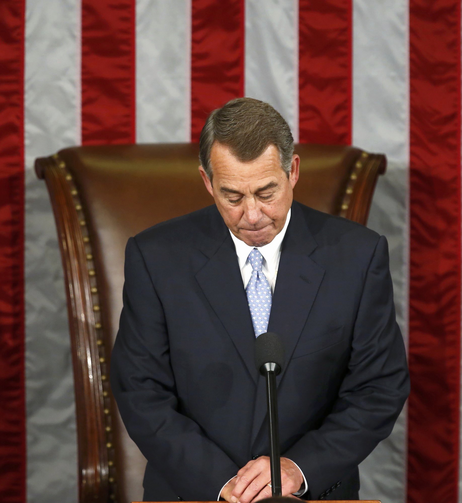 John Boehner was the subject of the 2019 America Profile (“A Conversation With Former House Speaker John Boehner,” 12/9/19). The cover story generated a fair amount of feedback, much of it expressing a longing for bipartisanship in the public square. Here are a few examples.

Thank you for the America profile of former House Speaker John Boehner. The speaker’s statement that between him and then-Vice President Joe Biden, “there was nothing we couldn’t resolve,” reflects the bipartisan cooperation our nation so badly needs today. In recognizing these two prominent Catholic leaders in 2016 to share the University of Notre Dame’s highest honor, the then-board chair Richard Notebaert said the Laetare Medal was conferred on both men “neither to advance your favored causes nor to endorse your respective policies, but to celebrate two lives and careers inspired by the Catholic call to service and admirably dedicated to the alignment of our democratic institutions with the contours of the common weal.”

Predictably, in 2016 partisans on both sides complained loudly about the selection of the individual in the opposing party. America’s insightful profile of “The Gentleman From Ohio” gives us a chance to reflect on what true public service calls for today.

Maybe a ‘Shock’ We Need

Thank you for your very insightful and caring article about John Boehner. Humility, friendliness, character and faith were the threads that wove together the sketch of this fine man.

He departed Congress, as you reported, at the advent of where we are in today’s Washington’s mess. As John Boehner did, maybe some of our congressional leaders should take a walk and have a serious conversation with the Almighty.

Maybe John Boehner’s prophecy is that we need a shock to come to our senses. Hopefully, we have the time to recover and focus on real needs. This interview should be read by everyone clamoring for political upmanship in our Capitol today.

Son of a Saloonkeeper

Well done. I watched Pope Francis’ address to Congress live—my eyes also “sweated” a lot then, as they are doing now as I type. As Father Malone wrote: “In what other country could the son of a saloonkeeper, one of 12 children in a two-bedroom house, rise to become the speaker of the national assembly?” That is John Boehner’s story.

An illuminating and thought-provoking interview with a true public servant. It provides both an alarm and a signal of hope on the current state of our national discourse. As Speaker Boehner commented, Congress was meant to be the place for advancing big ideas, reaching for the sky and trying to help our country excel. Women and men of both parties worked out their differing views believing in the good intent of the other. To return to that time (not so long ago) will call upon every bit of that American resilience he praises.

I believe Mr. Boehner is right that the press, both the hard left and hard right, greatly contribute to the current sad state of partisanship and division. Compromise is now viewed as a four-letter word. To paraphrase the words from the hymn “Let there be peace on earth, let it begin with me,” let there be less rancor and more empathy, and let it begin with me.

It’s wonderful that Boehner reflects on spiritual realities and has frequent “conversations” with the Lord. But let’s pray that the Lord leads him to stop lobbying for tobacco companies and leads him to lobby against them. I cannot fathom a person in good conscience doing such a thing.