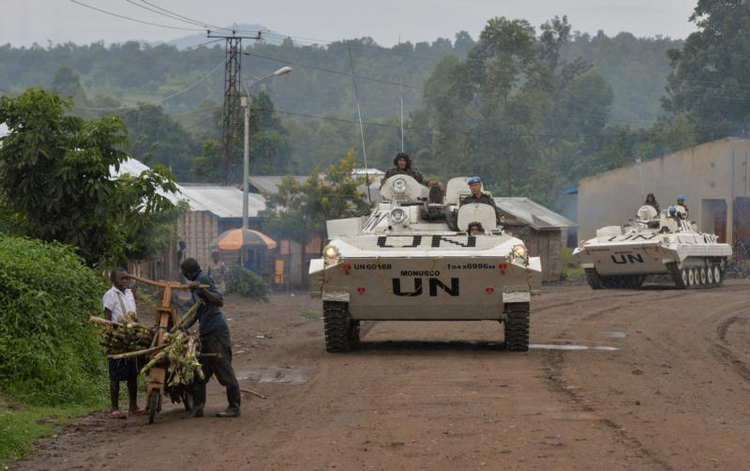 "We deplore the perverse, persisting insecurity that causes such immeasurable suffering to our populations, and we ask the Christian faithful to make concrete nonviolent gestures of solidarity and fraternal communion," said bishops from eastern Congo.

"We also urge the national, regional and international authorities to be more active in safeguarding our peace, national unity and territorial integrity."

The declaration, signed by Archbishop Francois Xavier Maroy Rusengo of Bukavu, was issued as church-owned schools, hospitals and social services shut down Dec. 2 in a "day of mourning, prayer and communion" with those caught up in attacks by armed groups.

It said bishops from six eastern dioceses had debated the "violence raging ever more acutely and terrifyingly" in North and South Kivu provinces. The statement said the bishops backed the strikes out of "compassion for all victims of this inhuman violence."

The Catholic Church's six archdioceses and 41 dioceses include two-thirds of Congo's 67.5 million inhabitants.

The church has been deeply involved in efforts to secure peace in the mineral-rich country, where 4.5 million people are currently displaced and a fifth of the population needs basic assistance, according to the United Nations. Up to 6 million people have died in conflicts since 1995, mainly over control of natural resources.

The secretary-general of the provincial bishops' assembly, Msgr. Jean-Marie Vianney Kitumaini, told Radio France International Dec. 2 the bishops believed "much more effective engagement" was needed by the Congolese government and international community. He said politicians were preoccupied with "seeking their own advantages. Although elections have taken place in the Congo, we don't sense any firm commitment to resolve issues afflicting these provinces."

In a Nov. 26 message, the Congolese bishops' conference said 80 people were killed that month, "and it should be emphasized these massacres are sometimes committed near Congolese army installations and police and military patrols."

Show Comments ()
Comments are automatically closed two weeks after an article's initial publication. See our comments policy for more.
Provide feedback on this article
Join the conversation: Login or create an account
Before you can comment, you need to update your profile to include your first and last name, as required in our comments policy. Then reload this page and you'll be set up for commenting. Update your profile
Advertisement
More: Bishops / Africa