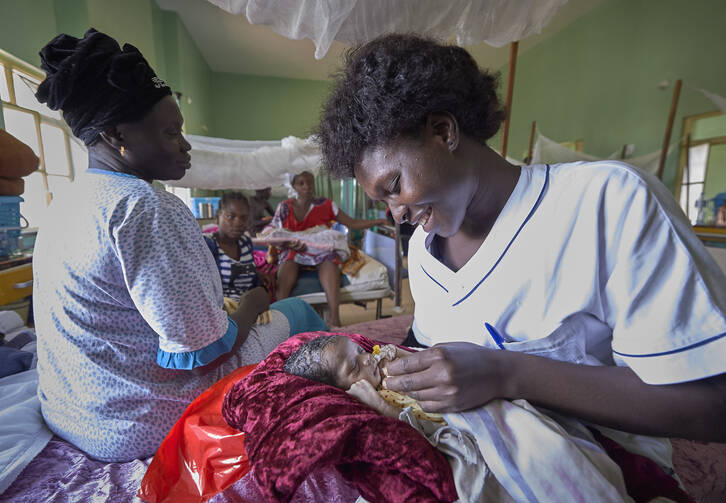 Eduardo Hiiboro Kussala, bishop of the Diocese of Tombura-Yambio in South Sudan, knows his nation, the world’s youngest, faces grave challenges. A devastating civil war that began in 2013, two years after the nation’s independence was celebrated in 2011, left as many as 400,000 dead, according to one study, and the country’s already devastated economy in deeper shambles before a 2018 peace accord.

Millions of South Sudanese are refugees in neighboring states or living in camps for internally displaced people inside South Sudan. The nation’s young people are not getting an education and finding the only “work” options available to them in criminal gangs or in the militias that terrorized scores of South Sudanese communities on both sides of the conflict.

Now as tensions rise again with the approach of a Nov. 12 deadline for the creation of a unity government, he has a message for the conflict-weary people of South Sudan. “The church is here to stay,” he said. “We serve the people; we don’t run away.”

As tensions rise again with the approach of a Nov. 12 deadline for the creation of a unity government, Bishop Kussala has a message for the conflict-weary people of South Sudan. “The church is here to stay,” he said. “We serve the people; we don’t run away.”

He had a different message for the U.S. State Department and other members of the international community during a fund- and awareness-raising tour of the United States in October: Do not give up on South Sudan. “We feel neglected and I’ve come [to the United States] really to beg for the U.S. government to come on board fully, to support the cause of the implementation of the peace in the country,” he told America.

Unfortunately, as he visited supporters at the Catholic Medical Mission Board and Sudan Relief Fund in New York, signs of the peace accord’s unraveling were becoming evident. On Oct. 20 South Sudan’s opposition leader, Riek Machar, urged a three-month extension of the deadline to form a new government as reports circulated that government and opposition military forces were gearing up for renewed conflict. He warned that the country could return to civil war if the current government rushes to meet the deadline without resolving major issues still in contention.

“Suppose we form a government on [Nov. 12], you know what’s going to happen? The ceasefire we’ve been enjoying for over a year will erupt,” he said. A previous attempt at power sharing in 2016 between Mr. Machar and South Sudanese President Salva Kiir ended in renewed fighting, and Mr. Machar was forced to flee the country on foot under a hail of bullets.

Mr. Machar was visiting the South Sudan capital of Juba to meet with a United Nations delegation, but he has pointedly refused to return to the capital permanently until security arrangements are in place. That reluctance is connected to a key outstanding issue: the integration of the nation’s various ethnic and political militias into a professional national army. U.N. officials have reported to the two South Sudanese leaders that it would take at least three months to retrain 41,500 fighters and troops into a unified army, including a 3,000-member V.I.P. protection force.

Bishop Kussala remains grateful for the international community’s role in the creation of an independent South Sudan. Now he urges greater patience in the peace process.

Despite the opposition leader’s concerns, a spokesperson for Mr. Kiir, Michael Makuei, said that the government was not willing to accept a “change of schedule nor change of program” at this time.

Bishop Kussala remains grateful for the international community’s role in the creation of an independent South Sudan. Now he urges greater patience in the peace process. The international diplomats who helped liberate the mostly Christian South Sudan from the predominately Muslim northern state of Sudan “thought, like a lot of people did, that once we got independence everything would be O.K.,” he said. It did not turn out that way.

People went out to celebrate “not knowing that what you bury cannot remain in the ground,” said Bishop Kussala. Economic and ethnic tensions between the Dinka, aligned with Mr. Kiir, and Nuer peoples, aligned with Mr. Machar, quickly resurfaced in the aftermath of independence, beginning five years of bloodshed among forces within the rebel movement that had once fought together for South Sudan’s independence from Khartoum.

The United States has contributed almost $4 billion in humanitarian aid to South Sudan since 2014, but it has recently threatened to cut off further support and impose sanctions in the absence of progress toward national reconciliation. But as some members of the international community step back in frustration, others have stepped into the gap, Bishop Kussala said, noting that China has become particularly active in South Sudan. Bishop Kussala is concerned that the Chinese government’s interest extends only so far as the completion of projects it is backing with loans or negotiations that would directly benefit China’s commercial interests.

Without a stronger U.S. presence, he argues, China will end up having a greater political and cultural influence in South Sudan. “And I’m sure we will end up with a big debt that the country will never be able to repay,” he said.

He would be grateful to see more young Americans visiting his country and perhaps bringing with them business, technical and other skills they can pass on to young people in South Sudan. According to Bishop Kussala, grave deficits in education and the absence of significant economic development mean fewer opportunities for peace building. He believes the church, assisted by supporters in the United States, can help create better alternatives for young people in South Sudan that could ultimately deter renewed violence.

The ecological and human impact of the oil industry represents another major challenge in South Sudan. Bishop Kussala describes himself as disappointed with the way the wealth of the nation has been invested—too much diverted to military purchases, not enough spent on the nation’s crushing humanitarian needs. “We have 2 million South Sudanese refugees and over 4 million displaced within the country. And then there are no roads. People cannot travel from one place to the next. This is the kind of a situation is supposed to worry a government: ‘Look, we need to do something!’”

But South Sudan’s poverty and lack of infrastructure, basic education and health care, he said, “are not because we did not have the money.”

The oil money and the humanitarian aid that have come into South Sudan, he said, should have been enough to create an economic foundation to build up human capital or create roads and other national infrastructure. Instead the oil revenue has trickled away because of “huge corruption,” according to Bishop Kussala. Even now it remains unclear how much revenue is being generated by oil production and how that revenue is being managed, he complained.

“Salaries are not being paid; services are not there; schools, hospitals and roads are being neglected.” South Sudan ranks near the bottom—178 out of 180—of Transparency International’s 2018 Corruption Perceptions Index.

Despite such discouraging obstacles, Bishop Kussala holds out hope that what he called “the prophetic kissing of the feet” may still keep the country’s leaders mindful of their obligations to peace. He was referring to dramatic moments last April when Pope Francis lowered himself to kiss the feet of South Sudan’s political leaders during what was described as a Vatican and Anglican church-sponsored “retreat” in Rome.

“That gesture has made a tremendous impact on the process of peace itself,” said Bishop Kussala, “because since that day there has never been physical confrontation between the leaders, and they have kept on referring to this gesture, and they’re still trying to understand its meaning.”

It was a shocking thing for these African leaders to be deferred to in this manner by the head of the church, especially in a culture where elders are revered, he said. “To go down on his knees to kiss their feet for them is seen as nothing less than a miracle, nothing less than God's intervention.”

Bishop Kussala saw the gesture as an act of spiritual spontaneity by the pope, an expression of something that he has come to believe strongly: “We can be able to overcome obstacles only by humility.

But men capable of leading others in combat, the bishop pointed out, are not necessarily the best equipped to lead as politicians. After so much fighting and suffering, bitterness among the political and ethnic rivals who must come together to form a unity government remains strong.

Few are willing to openly suggest that national leaders who have presided over so much suffering in South Sudan might consider stepping aside at this crucial moment, but, said Bishop Kussala, “We in the church have suggested to them that if the new government...is formed from the same old people, we are not going to expect it to do something new. They would continue to do the same thing.”

He believes if “a new group of people, technocrats” could be brought in now to prepare the country before the elections currently proposed for 2021 under the terms of the peace agreement, “that would be better.”

“But,” he fears, “they will stick to power; nobody wants to give up their chair. I don’t see it…. That was the humility that the pope was trying to teach them. One of the things they could have done is to say, ‘We can’t continue this way. We will move away and then we will get the young, new people to form the new government.’”

The bishop’s suggestion may appear self-evident to close observers of South Sudan’s fragile political structures; others may be too fearful to give voice to such a thought. According to Human Rights Watch, conditions in South Sudan regarding human rights and free expression, never good, have only become more precarious.

Asked if his ministry in South Sudan can be a dangerous one, Bishop Kussala smiled faintly but would only say that it is “not always easy.” The church in South Sudan, he explained, tries to maintain a balance, remaining open to all parties, ready to play a mediating role and “unite the different groups who are fighting.”

“I find it myself where each one wants to pull you to their side,” he said. Statements from the church are frequently challenged by the vying groups as evidence of it taking one side against the other. “But we continue to try to remain in the middle in order to bring them back,” he said.