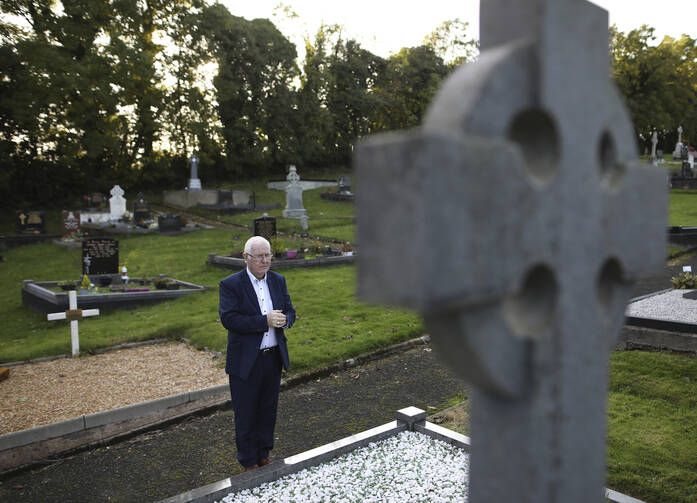 In this photo taken on Wednesday Oct. 16, 2019, Eugene Reavey visits the graves of his three brothers in Whitecross in South Armagh, Northern Ireland. Peace is personal for Reavey. He lost three brothers to the conflict in Northern Ireland, which claimed more than 3,500 lives over three decades. (Photo/Peter Morrison)

ON THE NORTHERN IRELAND BORDER (AP) — Eugene Reavey was tired and losing his voice, but the 72-year-old gathered with his neighbors on the border between Northern Ireland and the Republic of Ireland on a cold October evening to express their fears about what Brexit could mean for them.

Peace is personal for Reavey. He lost three brothers to the conflict in Northern Ireland, which claimed more than 3,500 lives over three decades.

"What I'd be afraid of (is) the violence starting again," he told The Associated Press. "The border's been going for years and centuries, and there's always been trouble on that border."

People gathered at crossing points along the frontier Wednesday, demanding that politicians protect a peace that suddenly seems in jeopardy.

At a crossing near the Irish town of Dundalk, adults and children wearing headlamps warmed themselves around a flaming trashcan. Local activists carried signs like "No Border Here Ever," insisting that negotiators remember the people of Northern Ireland as they thrash out a deal on Britain's departure from the European Union, which many fear could reignite tensions along the border.

The 1998 Good Friday Agreement ushered in two decades of relative peace and prosperity on both sides of the border between the U.K.'s Northern Ireland and the Republic of Ireland. That stability was possible, in part, because both countries were members of the European Union. Once the hated military checkpoints were removed, no barriers at all were needed on the border between two EU nations.

But with Britain's departure from the European Union, identity and customs checks could return — and with it, people fear, the enmities that caused the decades of violence.

Britain and the EU have pledged to keep the border open after Brexit, but they have struggled to find a solution that is acceptable to both sides.

While an agreement announced Thursday pledges to keep the border open, it marks only the first step to a deal. After all, Parliament rejected former Prime Minister Theresa May's deal three times. If the U.K. Parliament fails to agree, people here would potentially face a chaotic no-deal exit, with no guarantees about the border.

People here simply don't want to go back to "The Troubles." Toni Carragher, who campaigned to de-militarize Northern Ireland after the Good Friday accord, well remembers when the South Armagh area was one of the most militarized in Western Europe, with army and police stations everywhere. The rolling green hills felt more like a prison.

Would a Brexit mean the end of the UK? There may only be an England.
David Stewart

"The intrusion on one's lives in terms of the foot patrols, the stopping and searching of people's cars, when you are leaving your children to and from school, going from church, chapels, socially, whatever," she said. "You were continuously stopped and searched."

Reavey remembers the tension well. Before the protest at the border, he took reporters down a country road to the Catholic family's burial plot among green hills speckled with grazing cows. When one of the visitors remarked that the scene looked like a photo in a tourism brochure, he seemed startled and pointed out that 30 people had died on the road.

Three of his brothers — John Martin, 24, Brian, 22, and Anthony, 17 — were attacked on Jan. 4, 1976, while watching television in their home in Whitecross, County Armagh. Two died immediately, while Anthony survived the initial shooting but died weeks later. No one was ever charged.

Reavey has been campaigning for justice for his brothers ever since.

"All those guys had their whole lives in front of them," he said. "Today I'm wondering if John Martin had gotten married, what would his kids have been doing. ... We would have more young fellas on the football team. Since the 1960s we've never had a football team without a Reavey in it."

Reavey wants his brothers' killers to be named and shamed, together with an apology from the British prime minister. He can point to the house where he believes the killers live.

"If my brothers had been in the IRA, and there were many young fellas that was in the IRA, well, I would have put my head down and walked away," he said, his voice shaking. "My brothers were in nothing. They were completely innocent victims."

He often comes to the little graveyard to remember them. The grave is immaculate, its huge stone polished to gleaming.

The plot makes no mention of The Troubles. It simply says young men were "tragically killed in their home." That was the wish of Reavey's mother, who loathed violence.

"Our father made us all promise that we would not seek revenge, that we would not join any republican parties," he said. "And my mother, for 30 years, she prayed that the men who shot her sons would come and see a bit of sense."

Pray for a united Ireland. This could be the best opportunity in a lifetime.

Sorry, clicked twice. Pray for a united Ireland. This could be the best opportunity in a lifetime.