Could married priests keep the Catholic faith alive in the Amazon? 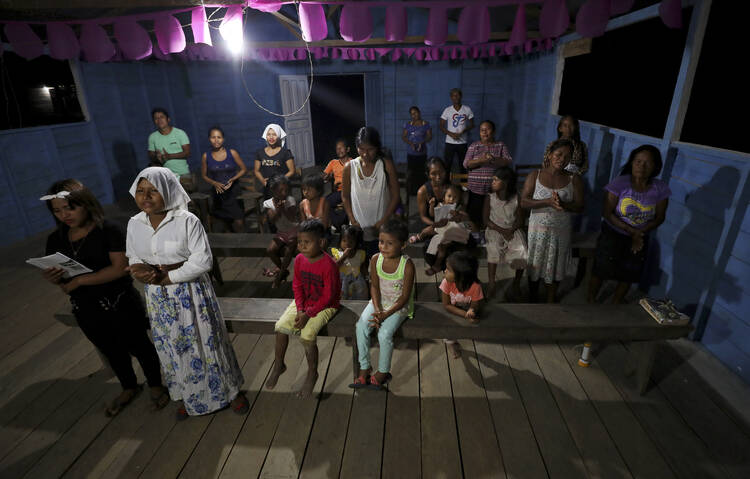 Worshippers attend a prayer ceremony known as the "celebration of the word" led by Antelmo Pereira at the Catholic church in Santa Rosa, Brazil, Saturday, Sept. 21, 2019. In remote Amazonian communities that are only accessible by boat, villagers can go for months without sacraments that only priests are allowed to deliver - including Mass and confessions, and the faithful have to depend on missionaries such as Pereira that are only allowed to lead prayer ceremonies. (AP Photo/Fernando Vergara)

SANTA ROSA, Brazil (AP) — At dusk in this small indigenous village, Antelmo Pereira calls local Catholics to prayer, changes into a white robe and leads a religious service that is the closest thing the faithful in this remote part of the Amazon can get to a proper Mass.

Speaking in the indigenous Ticuna language, he leads a recital of the Lord’s Prayer, reads a passage from the Gospel of Matthew and delivers a sermon on accepting Jesus into one’s heart, as cicadas chirp loudly in the jungle that lies just beyond the recently built Catholic church.

Pereira, 61, has been a part-time missionary for the past 15 years, volunteering his time on weekends to visit indigenous communities that rarely see a priest. He leads prayer services called Celebrations of the Word but cannot celebrate Mass or hear confessions in the isolated places he visits, because he is married and has nine children, and cannot become a priest.

But that could change if a proposal to ordain married men in remote parts of the Amazon gains traction at a gathering of bishops that opens at the Vatican on Sunday.

More than 100 bishops from South America will convene at the Synod of Bishops for the Pan-Amazon Region. The meeting will discuss social and environmental problems faced by the inhabitants of the Amazon, including the increasing rate of deforestation in the region. But bishops are also looking at ways to introduce changes to official ministries to better serve Catholics in this part of the world.

One item on the synod’s agenda is a proposal to study the possibility of priestly ordination for older men who have good standing in their communities and are preferably of indigenous origin, “even if they have an established and stable family.”

While the synod proposal would be novel for the Latin Rite church, there are already married priests in Eastern Rite Catholic churches and in cases where married Anglican priests have converted.

Nevertheless, the proposal has set off a firestorm of criticism against Pope Francis, with opponents accusing synod organizers of heresy for even introducing debate on the centuries-old tradition of a celibate priesthood in the Latin Rite church.

For these critics, the Amazon synod is just the latest instance of Francis using the synod process to introduce changes to the church by obtaining the blessing of a carefully chosen group of voting bishops.

On the ground, however, the agenda and focus on the needs of the indigenous have been welcomed.

“It’s a possibility that I haven’t quite processed in my head yet,” said Pereira, who is a member of the Ticuna tribe and would be a clear candidate for ordination if Pope Francis decides to pursue the reform.

“But if I am asked to become a priest I will accept. I will accept,” said the devout Catholic, who dreamed of becoming a priest as a youngster.

Since 1970, the number of priests around the world has remained steady, hovering at 400,000 to 415,000, according to Catholic Church figures. But the world’s Catholic population has doubled to 1.3 billion, leading to shortages of priests in some parts of the globe.

In remote Amazonian communities that are only accessible by boat, villagers can go months without sacraments that only priests can celebrate, including communion and confessions.

“There are many people in small communities that we are not reaching,” said Bishop José Javier Travieso, of San José del Amazonas in northern Peru. “We have to think if the way that we have structured our ministries, the way in which men and women participate in the church must remain as it is or if some changes must be made.”

The bishop, who will attend the synod, said that it might be time for the Catholic Church to return to some of the practices of early Christian communities that picked elders with families to perform religious duties. His vicariate in the Peruvian Amazon covers an area the size of Portugal, but only has 14 priests to serve a population of approximately 140,000 Catholics.

To keep the faith alive amidst the priest shortages, some clergy have begun training lay members of their parishes to perform Celebrations of the Word that are similar to Mass but do not include the consecration of the Eucharist, which can only be celebrated by a priest.

In Belém do Solimões, a small indigenous town on the banks of the Amazon River, Capuchin Friar Paulo Braghini has trained seven members of his parish, including Pereira, who has also been training to be ordained a deacon, a position in the church open to married men.

On the third weekend of every month, the friar, Pereira and dozens of missionaries leave Belém and fan out into small villages that are located deeper in the jungle. There they conduct religious classes for children and Celebrations of the Word.

“We enjoy these a lot,” said Ercilio Gaspar, a public health worker in the village of Novo Cruzador. Gaspar realizes it’s not the same as Mass, but said he’s happy with what the team of missionaries has accomplished in his village since the church opened in 2011.

“For us, Antelmo (Pereira) and his team are like our priests,” he added.

But in other villages along the Amazon River, some churchgoers support the ordination of community elders.

For Policarpa Bautista, a Ticuna leader in the Colombian village of Ararara, sustaining the faith is important, especially given that evangelical churches are gaining a foothold in the region.

Bautista said she doesn’t like the evangelical missionaries because they preach against indigenous rituals that can involve drinking large quantities of fermented beverages and revering the spirits of the Amazon jungle.

Catholic missionaries in the region are supportive of these traditions, Bautista said.

“We have been Catholic for a long time, and having two churches will divide our communities,” she said.

But some Catholics argue that the church would be abandoning its own beliefs if it begins to ordain married men to make up for priest shortages. They have mounted a campaign in opposition to the synod and its most controversial proposal.

One American cardinal has called for the faithful to pray and fast to prevent “serious theological errors and heresies” from being approved by the synod. Even one of Francis’ top advisers at the Vatican, Canadian Cardinal Marc Ouellet, says he is “skeptical” about the married priest proposal and suggested Francis shared his skepticism.

Ouellet praised the evangelical value of the celibate priesthood, noting that indigenous people were first converted to the Catholic faith by celibate priests whose decision to sacrifice a family was a powerful and visible “confession of faith.”

His view is shared by some of the more vocal opponents to the synod.

“Priests in the Latin church are celibate because they act as representatives of Jesus Christ and that is the path that he chose,” says José Antonio Ureta, a Chilean author who recently wrote a book that calls on Catholics to resist Francis’ reforms.

Ureta is a member of the Society for the Defense of Tradition, Family and Property, a Catholic group that has been highly critical of the synod and recently published a petition calling on bishops attending the meeting to advocate for the Amazon’s development, instead of letting it become a “green wasteland, populated by tribal ghettoes.”

He argues that the proposal to ordain married men is part of a broader agenda pushed by “Marxists” within the Catholic Church that aims to upend its hierarchical structure and turn it into a horizontal church, where community groups have more influence.

“This isn't new,” Ureta said of the proposal. “Liberation theologians have been pushing for it since the 1970s.”

Some church leaders believe priest shortages in the Amazon can be solved if bishops there make a greater effort to recruit young people into the priesthood. In the meantime, he says, missionaries can continue to keep the faith alive without being ordained.

“The Eucharist is one of the most important celebrations in the church,” Ureta said. “But the main thing is to have faith and to be baptized. That is what leads to salvation.”

Pereira says that he wanted to become a priest when he was in his 20s, before he had children.

But he was discouraged because the nearest seminary was a couple days away by boat from his hometown. Back then, he hadn’t finished elementary school, which made it unlikely for him to be considered for the priesthood.

That barrier is gone. Pereira completed his basic studies and obtained a university degree in his 50s, majoring in Ticuna language studies.

He teaches Ticuna at the elementary school in Belém do Solimões and recently helped translate a children’s catechism book into the indigenous language. Pereira knows little about the debate that will take place in the Vatican this month. But he does acknowledge that becoming a priest would be appealing and fulfill a dream.

“This is a strict path that not everyone is willing to follow,” he said. “In my community we need more people to announce the word of God.”