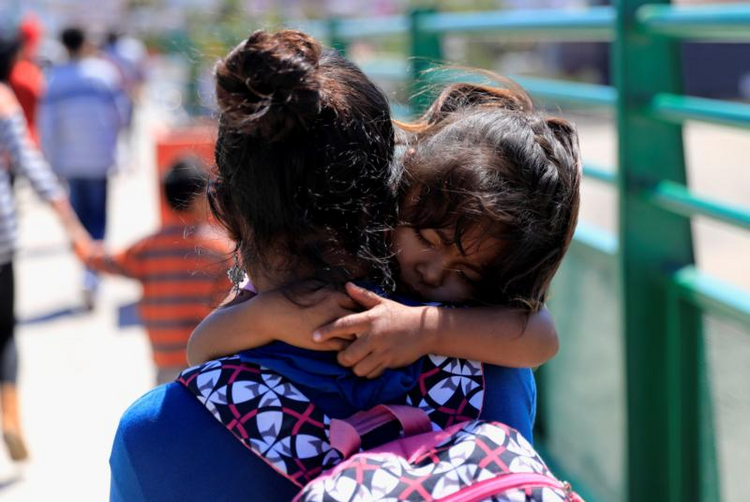 A Central American migrant carries her child July 18, 2019, in Tijuana, Mexico, just after she was sent back from the U.S. under the Migrant Protection Protocols. Bishops from Central America and southern Mexico called on Catholics to better accompany migrants heading north. (CNS photo/Carlos Jasso, Reuters)

MEXICO CITY (CNS) -- Bishops from Central America and southern Mexico called on Catholics to better accompany migrants heading north, at a time when immigration enforcement has increased in Mexico.

"As pastors of our people, we bishops are close to our brothers who suffer, and we know the suffering of migrants, the risks and dangers confronted by those leaving the security of home and the coming apart of families, especially when children are separated from their families," the bishops said. They issued the statement after a Sept. 9-11 meeting of church leaders from Central America and southern Mexico in the Mexican city of Tapachula.

The bishops also called for people to "overcome the fear that migration can generate, because it is about treating our brothers well," and urged people to "work in a coordinated and organized way to create just migration policies."

Their statement came as the Mexican government -- bowing to U.S. pressure -- steps up immigration enforcement along its southern and northern borders to stem the flow of migrants traveling through the country.

In the United States, meanwhile, a Sept. 11 Supreme Court decision allowed the U.S. government to fully implement a policy of denying asylum to anyone who traveled through another country while on their way to the United States without first seeking asylum in that country. The ruling takes effect while the government policy is being appealed in the court system.

Mexican Foreign Minister Marcelo Ebrard said earlier this month that Mexico had slowed the flow of migrants by some 56 percent since early June, when Mexico agreed to a deal with the United States to increase immigration enforcement to avoid President Donald Trump applying tariffs on Mexican exports. Mexico also has been accepting the return of asylum-seekers, who must wait in Mexico while their cases are heard in U.S. courts, a plan known as Migrant Protection Protocols.

"The (downward) trend is irreversible. It's something that we think is going to be permanent," Ebrard said Sept. 10 in Washington after meeting U.S. officials.

A Sept. 10 readout from the office of U.S. Vice President Mike Pence said the two countries "agreed to implement the Migrant Protection Protocols to the fullest extent possible."

A Call for the Protection of Migrants
From AP, CNS, RNS, Staff and other sources

The readout added, "The leaders agreed that while progress has been made, more work remains in order to further reduce the flow of illegal migrants to the United States."

The U.S. government has been pressuring countries to the south of the U.S.-Mexico border to impede the path of migrants -- many of whom come from Central American countries, but also from Caribbean countries such as Cuba and Haiti and as far away as Africa and Asia.

One of the ways of slowing migrants is by negotiating so-called safe third country agreements -- something Mexico rejects, even as it has agreed to the Migrant Protection Protocols, which force asylum-seekers to survive in cities rife with violence on Mexico's northern border.

If a country signs a safe third country agreement with the United States -- as occurred in Guatemala -- migrants passing through there would be ineligible to seek asylum in the United States.

In the case of Guatemala, migrants stepping foot in the country would have to apply for asylum there, even though the impoverished nation is in no position to receive a surge in migration.

"The other countries do not have asylum systems set up to the same degree that the United States does to be able to do this," said Rick Jones, immigration adviser at Catholic Relief Services in El Salvador.

"Right now, they have troubles protecting their own people in terms of the levels of insecurity, let alone Guatemala receiving Salvadorans and Hondurans. They're going to be overwhelmed."

Mexico's agency for asylum claims says it has received more than 48,000 requests in the first eight months of 2019, an increase of more than 200 percent over the same period of 2018.