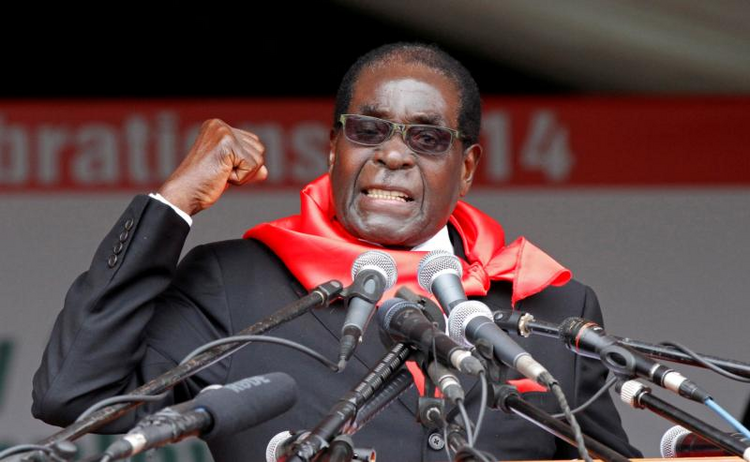 CAPE TOWN, South Africa (CNS) -- Robert Mugabe, who led Zimbabwe to independence from Britain in 1980 and then crushed his opposition during nearly four decades of rule, always liked to be seen as a devout Catholic.

Mugabe, 95, died Sept. 6 in Singapore, where he has often received medical treatment in recent years.

He was calculated and pragmatic, using the church when it suited him, said Jesuit Father Oskar Wermter, noting that Mugabe appeared at Masses that would attract publicity and always expected to address the congregation.

Father Frederick Chiromba, secretary-general of the Zimbabwe Catholic Bishops' Conference, said the news of Mugabe's death "is met with much sadness."

Mugabe "championed the liberation struggle" against white rule "and brought the country to independence," he said in a Sept. 6 telephone interview from Zimbabwe's capital, Harare.

In later years, "the former liberator came to be seen as an oppressor of the people," he said. Mugabe was forced out in a de facto coup in November 2017.

With life expectancy "now very low," the fact that Mugabe lived to 95 is extraordinary, Father Chiromba said. Zimbabwe's life expectancy is 61 years, according to the World Health Organization.

Mugabe was born on Feb. 21, 1924, near Kutama, northeast of Zimbabwe's capital Harare, in what was then Rhodesia.

The parish priest on the Kutama mission station, Jesuit Father Jerome O'Hea, "recognized little Robert as a clever boy and promoted him wherever he could," Father Wermter said.

Mugabe's mother "was a strong Catholic who had been deserted by his carpenter father," he said.

When Mugabe had completed his training as a teacher, he taught at Catholic schools in Zimbabwe before leaving for Ghana, where he met his first wife, Sally Hayfron. They were married in a Catholic church in Harare in 1961, and three years later Mugabe was imprisoned for 10 years by the Rhodesian government for opposing white rule.

During that time, Jesuit priests brought the man who eventually earned seven university degrees the materials he needed for his studies, Father Wermter said.

He said that part of the enormous bitterness that Mugabe is said to have carried throughout his life can be traced to the refusal of the Rhodesian authorities to allow him to leave the prison to go to Ghana to bury his 3-year-old son, who had died of malaria. Sally Mugabe was in her home country with Nhamodzenyika, their only child, while Mugabe was imprisoned.

After Mugabe's release in 1974, a diocesan priest and a few Dominican nuns helped smuggle him across Zimbabwe's eastern border into Mozambique, Father Wermter said.

From Mozambique, Mugabe led guerrilla forces in Zimbabwe's protracted war for independence. He returned to Rhodesia in 1979 and, in 1980, won elections and became prime minister of the newly independent country, renamed Zimbabwe.

While in the early years of his rule Mugabe was praised for building schools and hospitals and expanding social services, at the same time he was leading a brutal crackdown on opposition supporters in the predominantly Ndebele regions of Zimbabwe.

A 1997 report -- compiled from witness accounts by the Catholic Commission for Justice and Peace in Zimbabwe and the Legal Resources Foundation, a group of human rights lawyers -- lists more than 7,000 cases of killings, torture and human rights abuses by Zimbabwe government troops in the western Matabeleland province from 1981 to 1987.

This report changed Mugabe's relationship with the church, which until then had been cordial, and he "started to call the bishops sanctimonious prelates," Father Wermter said.

He always hit back viciously when he was criticized, he said, noting that while Mugabe would publicly dismiss as unimportant pastoral letters by Zimbabwe's bishops that were critical of him and his government, he was "stung by their words."

Mugabe was "vain and conceited, and if you attacked him you were sure to lose," Father Wermter said, noting the case of Archbishop Pius Ncube, who resigned as archbishop of Bulawayo in 2007.

Archbishop Ncube and Mugabe's relationship had grown very bitter, with the archbishop's attacks on the government growing into increasingly personal attacks on Mugabe, followed by vicious counter-attacks, he said.

Mugabe then "used information given to him by his secret service to destroy the man," he said.

A lawsuit alleging that the archbishop committed adultery was made public in 2007, and state-run newspapers published photos they said were of Archbishop Ncube and a woman, taken with a concealed camera placed in the archbishop's bedroom.

The previous year, Archbishop Ncube had told politicians and church leaders in London that about 3,500 people were dying each week in his country from a "unique convergence of malnutrition, poverty and AIDS."

At the time, World Health Organization figures showed that life expectancy in Zimbabwe was the lowest in the world: 34 years for women and 37 years for men. Noting that Zimbabwe's unemployment rate was 80 percent, and that the country had the fastest-declining economy in the world, Archbishop Ncube blamed the crisis on the mismanagement of the country under Mugabe and called on the international community to maintain pressure on the ruling party.

On the other hand, Archbishop Patrick Chakaipa of Harare, who died in 2003, was a friend of Mugabe, and his support for the ruling party was seen by analysts as a barrier to the conference of bishops' ability to speak with one voice against injustices.

Archbishop Chakaipa officiated at the 1996 marriage of Mugabe to Grace Marufu in Katuma. At the time, they had two children together, and a third was born when Mugabe was 73 years old.

Grace was married to an air force pilot when she became Mugabe's secretary, then mistress, before Sally Mugabe died of a kidney disease in 1992.

Mugabe did not take part in the day-to-day activities of the church, but would be in the front pew at events such as a special Mass to mark the 2002 beatification of Mother Teresa of Kolkata. At that Mass, he "spoke beautifully about charity and impressed everyone with his words," Father Wermter said.

Zimbabwe's bishops, and IMBISA -- which represents the bishops' conferences of Angola, Sao Tome and Principe, Botswana, Mozambique, Swaziland, Namibia, Lesotho, Zimbabwe and South Africa and has its headquarters in Harare -- "always tried to keep up a dialogue with Mugabe," Father Wermter said.

Father Wermter is a social commentator. Before his retirement, he was director of Jesuit Communications, headed up IMBISA's department for pastoral work and theology, and was a parish priest in the high-density Harare suburb of Mbare.