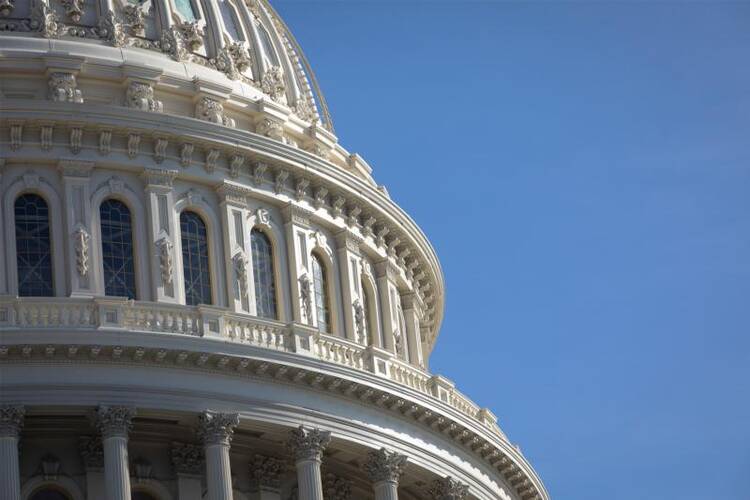 On July 18, protesters, including priests and religious, are expected to gather on the West Lawn of the U.S. Capitol in an event organized by a coalition of Catholic advocacy groups. The day’s events will include a rally condemning the treatment of migrant children, but a smaller number of Catholic leaders and volunteers intend to trespass inside the Russell Senate Office building while praying the rosary in an act of civil disobedience.

“We’re all horrified at the treatment of children at the border,” said Patrick Carolan, the executive director of the Franciscan Action Network. “We’ve been talking and decided that we had to do something.” Mr. Carolan said that this protest is to be the first of a series of events designed to bring awareness to the fact that the government’s treatment of migrants “is against our Catholic faith, Jesus and everything that Francis of Assisi thought and lived [for].”

“We are trying to get Catholics across the country to rise up and reclaim our faith,” he said. 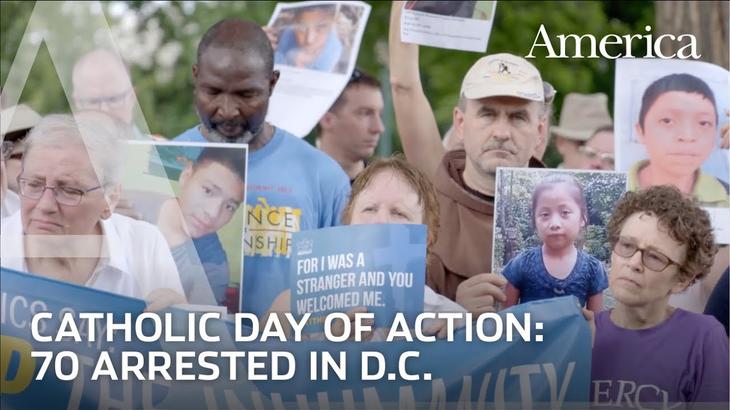 “Images of immigrant children detained in fence cages, separated from family members and living in unsanitary, unhealthy conditions have outraged the nation in recent weeks,” Christopher Kerr, the executive director of the Ignatian Solidarity Network, said in an email to America. “A core group of national Catholic social justice organizations felt it was necessary to take broader public action to decry this treatment of children not only as a violation of human dignity and rights but also as contrary to core Catholic values of human dignity and caring for those who are most vulnerable.”

The event comes just days after Immigration and Customs Enforcement actions on July 14 approved by the Trump administration that were said to have targeted 2,000 individuals in cities across the country. Though by July 15 the ICE deportation actions appeared more limited in scope than the president had indicated, church officials said that they appeared intended to intimidate and frighten migrant communities in the United States.

The ICE deportation moves are just the latest in a long series of policy decisions made by the Trump administration meant to discourage asylum-seekers and other migrants from making the trip to the U.S.-Mexico border.

Mr. Kerr noted, “Across the country, we have seen our partners in the Jesuit network, particularly parishes serving immigrant communities, preparing for the raids.” Some parishes, such as Saint Mary’s in Ann Arbor, Mich., have begun distributing immigration emergency manuals during their Spanish Masses. Others, like St. Thomas More Parish in St. Paul, Minn., have declared themselves “sanctuary parishes,” committed to hosting immigrant families. Many more are providing “know your rights” training, connecting parishioners to legal services and advocating through rallies and protests.

“If the Trump administration is going to persist in terror tactics against hard working immigrants and their families, then Catholics will continue to act, give public witness and condemn this social sin,” said Simone Campbell, S.S.S., the executive director of Network Lobby for Catholic Social Justice, in a press statement. “Congress refuses to fix our immigration law, causing our people to suffer.”

“The separation of families and detention of children both violate their human rights and run contrary to Catholic social teaching, which considers the family sacred."

Other Catholic organizations sponsoring the event include the Columban Center for Advocacy and Outreach, the Conference of Major Superiors of Men, the Jesuit Conference of Canada and the United States, the Leadership Conference of Women Religious and Pax Christi USA.

The coalition of advocacy groups has reached out to supporters primarily through their Facebook event page. The Franciscan Action Network is also encouraging Catholics to participate and has reached out to volunteers interested in joining the civil disobedience portion of the protest who are willing to risk arrest.

“Reasonable people may differ on how to address the challenges at the southern border, but the [Trump] administration’s mistreatment of children and families is truly outrageous,” said Ted Penton, S.J., the secretary of the Office of Justice and Ecology for the Jesuit Conference of Canada and the United States in an email.

“The separation of families and detention of children both violate their human rights and run contrary to Catholic social teaching, which considers the family sacred,” Father Penton said. “We all need to be as clear as possible that we object to these immoral policies and call on our elected representatives to end them immediately.”

This is so incredibly inspiring! These Catholic groups may very well be the salvation of our country. I’m signing up!

Every time I give up on The Faith, it returns to give me reason to hope.

May this action bear fruit a thousandfold!

It's past time! I've been so inspired by the NEVER AGAIN protesters. I was grateful for a local parish which hosted lights for liberty Friday but my local parish didn't even offer prayers (and the gospel reading was the Good Samaritin)

All well and good, but a bit after the fact! Congress is already well aware of the desperate situation there in part thanks to the House "Squad"'s fact-finding trip to the border and the inspection trip VP pence recently took to the border. Congress passed a $4.5billion bill on the 25th of June to help with providing humanitarian support for people being detained at the border. A few months ago the Pope sent $500k to help. How about taking the money YOU will spend going to this party in DC and donating it to a relief fund at your parish for migrants fleeing poverty and despair in Central America! Think of how much money will be spent by the people going to DC, and how much food, medicine, clothes could have been provided instead!

Once again, everything is Trump's fault? Didn't this problem exist during Obama's administration? Didn't he do deportations? It's amazing how all of these social justice agencies are now swinging into action now, when the President is not of their progressive ilk.

Forget the past and who did what. We need to act now to stop the immediate horrors of this inhumane and immoral immigration policy. Thank God these Catholic groups are acting. We need to come together and support them, proclaiming out faith as well as our humanity.

“Congress refuses to fix our immigration law, causing our people to suffer.” This is the most important sentence in the article.