The Editors: Judicial oversight cannot prevent gerrymandering. It’s up to us. 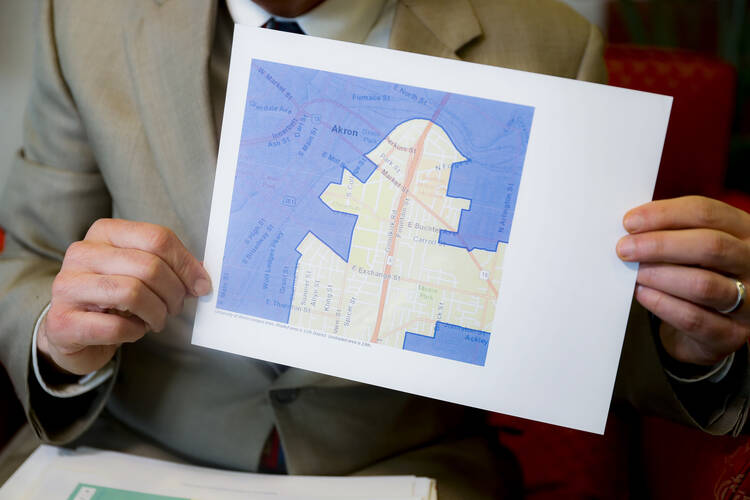 Last month the U.S. Supreme Court declined to set limits on gerrymandering, the practice of drawing the borders of a state’s legislative districts in such a way as to increase the seats won by one political party far above the share of the vote it receives statewide. At issue in the Supreme Court case were congressional districts drawn by state legislatures in North Carolina (where Republican candidates received an aggregate 53 percent of the vote last year but won 10 out of 13 congressional seats) and Maryland (where Democrats redrew the western “panhandle” congressional district into the Washington, D.C., suburbs, apparently to defeat a Republican incumbent).

In writing the decision for the majority—which included all five justices appointed by Republican presidents and none of the four appointed by Democratic presidents—Chief Justice John Roberts admitted, “Excessive partisanship in districting leads to results that reasonably seem unjust.” But he decided that the injustice of gerrymandering “does not mean that the solution lies with the federal judiciary.”

The reluctance to invite hundreds of lawsuits over redistricting plans that in some way distort the will of the voters is understandable. But it was the Supreme Court itself in 1964 that used the “one person, one vote” principle to rule that election districts must be redrawn periodically so that they come as close as possible to having equal populations, the purpose being to prevent one party from cementing control through “rotten boroughs” that award seats to tiny, easily managed constituencies. But now centered on an incumbent’s political base and extending in bizarre directions to take in just enough voters to meet population requirements, many current congressional districts are de facto rotten boroughs, even if the court majority does not feel it has the ability to recognize them as such.

The Supreme Court and the Ten Commandments
The Editors

After the first 2020 democratic debate, what issues do you want to hear more about?
Our readers

Even if the Supreme Court were willing, judicial oversight would not be a panacea for gerrymandering. Other reforms are both possible and necessary. One is to begin the years-long process of amending the Constitution to clarify who has the authority to draw electoral districts and what methods are permissible. In the meantime, the most extreme forms of partisan redistricting may still be found to violate state constitutions, if not the federal Constitution. Several states have created independent commissions to draw legislative districts, putting an end to the inherently undemocratic practice of a party redrawing lines to remain in power and eliminate the need to appeal to a majority of voters.

Legislation or referendums to create such independent bodies can prohibit the worst methods of gerrymandering, like splitting communities along racial lines or packing all of one party’s voters into a single district so that it has almost no chance of winning any other district. But even this remedy requires oversight by the press and by voters to ensure that the redistricting cartographers continue to play fair. The Supreme Court has decided not to take on the role of deciding whether electoral maps uphold democratic principles. That means the job falls to the rest of us.

1
The U.S. bishops aren’t the extremists in the abortion debate.
Richard M. Doerflinger
2
Pope Francis: The devil knows the passwords to our heart. We must know them too.
Pope Francis
3
The U.S. bishops’ president race is wide open. Here’s who’s in the running.
Michael J. O’Loughlin
4
In historic first, Pope Francis approves an ‘ecclesial conference’ with lay people instead of a bishops-only leadership body
Gerard O’Connell
5
Will Catholics join evangelicals in the culture war? 7 questions to understand the 2022 midterms
Robert David Sullivan