The Editors on the McCarthy-Stevens hearings of 1954 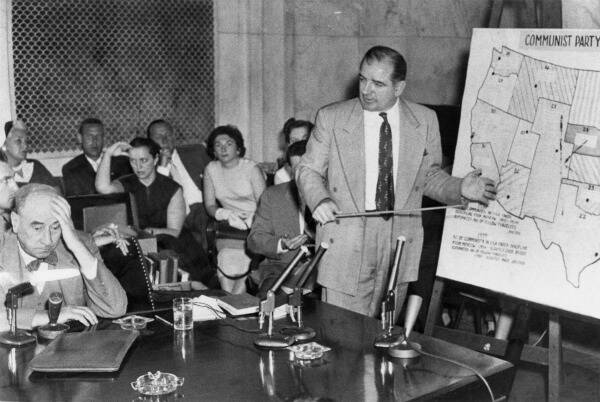 Editor’s note: This article has been republished as part of America’s special 110th anniversary issue. It was originally published May 22, 1954.

The turn taken in the McCarthy-Stevens hearings beginning May 4 dramatized across the nation the grave constitutional issue posed by Senator McCarthy’s “methods.” This came when the Senator wanted to introduce as evidence what purported to be a “carbon copy” of a “letter,” dated Jan. 26, 1951, from FBI Director J. Edgar Hoover to General Bolling of Army Intelligence. This “letter,” two and a quarter pages long, (which Mr. Hoover said, through subcommittee assistant counsel, he never wrote) was declared by Mr. Hoover to contain seven paragraphs identical with paragraphs in a fifteen-page memorandum he had sent to General Bolling (and to Maj. Gen. Joseph F. Carroll of Air Force Intelligence) on the same day.

The memorandum was clearly marked as classified information. Now Senator McCarthy has made a career of trying to discover and ferret out “subversives” in the Federal Government,  i.e., people who might be in a position to transmit classified information to unauthorized individuals. His Democratic colleagues therefore inquired how he, who was never authorized, came into possession of classified data.

Mr. McCarthy’s reply should be of more than passing interest to all Americans who find in the “rule of law,” as opposed to the arbitrary “rule of men,” the hallmark of free government.

Mr. McCarthy’s reply should be of more than passing interest to all Americans who find in the “rule of law,” as opposed to the arbitrary “rule of men,” the hallmark of free government. The Senator said he had received the “letter” from a young Army Intelligence Officer, whom he repeatedly refused to identify. The mere fact that his informant had violated his oath of office, had violated Army Regulation 380-10, had violated an Executive Order of March 15, 1948 and had possibly even violated the Internal Security Act of 1950 meant nothing to the Senator. Worse still, pro tem chairman Mundt, on advice from subcommittee counsel Ray Jenkins, ruled that Senator McCarthy, like all “law-enforcing officers,” had no duty to reveal the source of his information. Why they regarded the sub-committee as a “law-enforcing” agency they failed to reveal—perhaps because it is a law-making, not law-enforcing, body.

Establishing the U. S. President as “the man of the people” instead of “the minion of the Senate,” as James Wilson observed in the Constitutional Convention, was, “in truth, the most difficult [subject] of all on which we have had to decide.” During nearly the entire convention the framers tentatively agreed on having the President elected by the Senate—until they finally decided that only some kind of election by the people would give him the independence of Congress his functions required.

The American Presidency was set up on the principle of separation of powers. He alone (apart from the Vice President) is nationally chosen. He has directly from the Constitution the powers the American people have delegated to the nation’s Chief Executive. Whether or not the President is properly discharging the duties assigned him by the people through that charter and through national election is for the people as a whole to decide—not the junior Senator from Wisconsin, on whom the American people never have had a chance to vote.

In The Idea of a University Cardinal Newman warned against “a man of one idea...of the view, partly true, but subordinate, partly false, which is all that can proceed out of anything so partial.” Mr. McCarthy seems to think that all the operations of government boil down to one: eliminating people he judges subversive. The President, the Army, the State and Justice Departments all have a lot of other things to do.

The folly of the McCarthy formula is shown in Indo-China, where the fate of the free world is slowly, relentlessly being shaped, with conspicuously no help from Mr. McCarthy. If he insists on his piecemeal and “peaceful” overthrow of the Presidency, he may do great harm to U. S. policy by his so far very successful diversionary tactics.