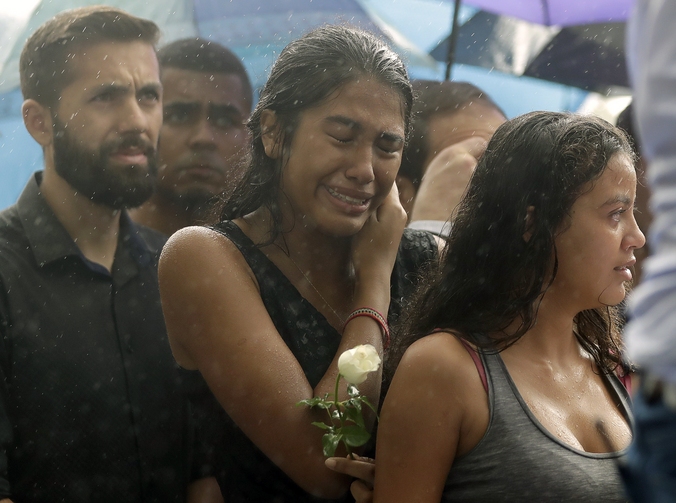 At the burial of 15-year-old student Kaio Lucas da Costa Limeira, a victim of a mass shooting at the Raul Brasil State School in Suzano, Brazil. Classmates, friends and families began saying goodbye to victims with thousands attending a wake in the Sao Paulo suburb on March 14. (AP Photo/Andre Penner)

Brazil has endured far more than its share of political, economic and criminal violence, but school shootings here have been rare.

Or, at least, they used to be.

Though the horrific attack on two mosques in New Zealand on March 15 has already eclipsed the event in world headlines, Brazil is still reeling three days after 10 people were killed by two young men who assaulted a São Paulo suburban school on March 12. The two gunmen were former students at the public school in the town of Suzano. They had arrived masked and armed with handguns, knives, axes and crossbows.

During a break between classes, the two shooters killed eight teenagers and two adults before killing themselves as police closed in. The attack lasted just 15 minutes. One of the men had also shot and killed his uncle, the owner of a used-car business nearby, before launching the attack on the school. Authorities identified the attackers as a 17-year-old and a 25-year-old. The police arrested a third suspect on March 15, another 17 year-old, who is alleged to have helped plan the crime.

The governor of the state of São Paulo, João Doria, quickly traveled to Suzano and called the scene of the aftermath of the attack the saddest thing he has ever witnessed. “I’m horrified, shocked,” he said.

The public school hosts elementary and middle school classes. It also has a foreign-language center for young people. The governor offered a compensation of 100,000 reais ($26,000) to the families of victims who agreed not to sue the state.

The governor of the state of São Paulo, João Doria, quickly traveled to Suzano and called the scene of the aftermath of the attack the saddest thing he has ever witnessed.

João Camilo Pires de Campos, public secretary for the state of São Paulo, told journalists that authorities have to find out what motivated the two former students to commit such a horrible crime. Relatives mentioned to the press that they had been victims of bullying at school.

President Jair Bolsonaro used his Twitter account to release a sober statement: “I give my condolences to the families of the victims of the inhuman attack...a monstrosity and cowardice of immeasurable size. May God comfort the hearts of all!”

The local bishop, the Most Rev. Pedro Luiz Stringhini, said in a statement that the church joins “in prayers for the deceased ones, including the authors of this sad event, asking God to welcome them in His mercy and for the recovery of those who were shot.” Cardinal Odilo Scherer, the archbishop of São Paulo, said that the tragedy demands a collective social reflection in the future, but that the moment now calls for solidarity and prayer for the family.

“There is no way we can give human explanations [to this attack] because all explanations at this point do not bring us comfort. The only thing that brings us comfort is to put it in the hand of God,” the cardinal said in a radio broadcast. “God is Lord, God is Judge and, to Him, we surrender the lives of the people who died, to Him we surrender the care of all the people who were struck, who were wounded both in the body and in the soul.”

Though the United States remains the world leader in similar mass attacks, the incident in Suzanoe represented the seventh attack resulting in multiple deaths or injuries in Brazil since 1999. Previous attacks occurred in schools, movie theaters and churches. Many journalists, politicians and commentators on social media connected the latest tragedy to the current government’s proposal to liberalize access to guns.

One of Mr. Bolsonaro’s main promises during his campaign had been to make it easier for the “good citizens” to legally buy weapons to protect themselves, their families and property. In the first month after he took office, the president signed a decree making it easier for citizens to keep a firearm at home.

While families and friends mourned the victims, a senator from São Paulo elected by the president’s P.S.L. (Social Liberal Party) echoed suggestions from U.S. President Donald Trump that school workers should be armed to protect students. “If we had an armed citizen inside the school, a teacher, a janitor, a retired police officer there, he could have minimized the effect of the tragedy,” Senator Major Olímpio said. “As long as the weapons are illegal, only the illegal ones will have weapons!,” he tweeted.

Vice-president General Hamilton Mourão said that “this type of thing used not to happen in Brazil,” suggesting that violent video games might be part of the problem. Like many other Bolsonaro supporters, however, he minimized possible associations between a policy that aims to legalize guns and tragedies like the one in Suzano. “Are you going to say that the guns those guys had were legal? I think it has nothing to do [with it]. I know this is going to be discussed, but that’s my view,” he told journalists.

In the first month after he took office, the president signed a decree making it easier for citizens to keep a firearm at home.

An expert in education, theology and children’s pedagogy, Circe Mara Marques told America that the quality of education in Brazil is directly related to the problem of violence. In fact, many public schools are in areas controlled by drug dealers; instances of violence among students and against teachers are quite common. Brazil currently is among the global leaders in rates of death by firearm, trailing Colombia, Guatemala, Venezuela and El Salvador but just ahead of Mexico and the United States.

The quality of public education in Brazil is generally low; thousands of public school teachers have inadequate training for the subjects they teach. Three million children between the ages of 4 and 17 have dropped out of school in Brazil, according to an O Estado de S. Paulo editorial.

The only way to avoid more attacks like the one that happened in Suzano is to promote a “culture of peace” in schools, as opposed to a “culture of violence” that currently prevails in the whole of Western society, Ms. Marques says. She is a professor at two universities in the state of Santa Catarina (Uniarp and Unochapecó) and author of the book Peace and Early Childhood Education: Listening to the Voice of Children.

“The culture of violence is overlapping the culture of peace. That has something to do with our history of violence and exploitation against indigenous and black populations, but I also see as necessary and urgent that schools and families join efforts to make schools a peaceful environment,” she says.

According to the professor, the influence of video games, internet and television is part of the problem. It is also through the media that they learn about similar school rampages, like the ones that have become sadly frequent in the United States.

“The culture of violence is spread across all channels. When I was a teacher, children would play ‘cops and robbers,’ using names of drug bosses they saw on TV. I wonder if they have the same reference of peacemakers like Mother Teresa, Mahatma Gandhi and Martin Luther King,” she says.

Bringing family members to schools, involving adult role models in local communities and improving a school’s capacity to respond to problems like bullying are part of the solution, according to Ms. Marques.

“Bullying is a relationship of violence with the other. We are so preoccupied with teaching content, mathematics, languages, sciences, but the mediation of conflicts that take place in the classroom is forgotten,” she says.

“The reasons children quarrel with each other are belittled by adults—they are usually fighting for ‘nonsense.’ But, well, it is important to them. Anger is a feeling that must be dealt with, not suppressed.”

Facing a case of extreme violence, lawmakers and government authorities tend to reinforce security measures in schools, making access more strict and increasing the presence of the police. Ms. Marques says such measures are important, but they are not enough. Teachers must also be trained to work as “conflict mediators,” and schools must be equipped to deal with children and teenagers who come from problematic backgrounds—an increasingly common reality in Brazil.

“Of course, no teacher would be able to deal with the situation of chaos that was generated by the Suzano attack. However, we could work better on preventing these situations,” Ms. Marques says. “The two young men were students of that school. What happened in the life of these students to develop this feeling about the people in that space?”

Making more guns available to teachers or administrators will not bring more discipline to schools, she believes. “We must teach respect for parents and teachers…. But that does not mean [relying on] authoritarianism,” Ms. Marques says.

“Children must learn how to deal with conflict situations without the use of violence, learn how to listen to the other and put yourself in the other’s shoes. These are things they learn very young and carry for life,” Ms. Marques says.

Domestic violence in Brazil involves any sort of violence or abuse by using intimate companions or own family contributors towards one another. Most people of domestic violence instances in Brazil are performed via the person in opposition to their female companions. inside the Brazil colony period, men were taken into consideration to be owners of ladies they married, entitled to conquer, violent or even kill, if important. Custom Dissertation Writing Service