Cardinal O’Malley: Venezuela’s interim president has a formula that could avoid a civil war 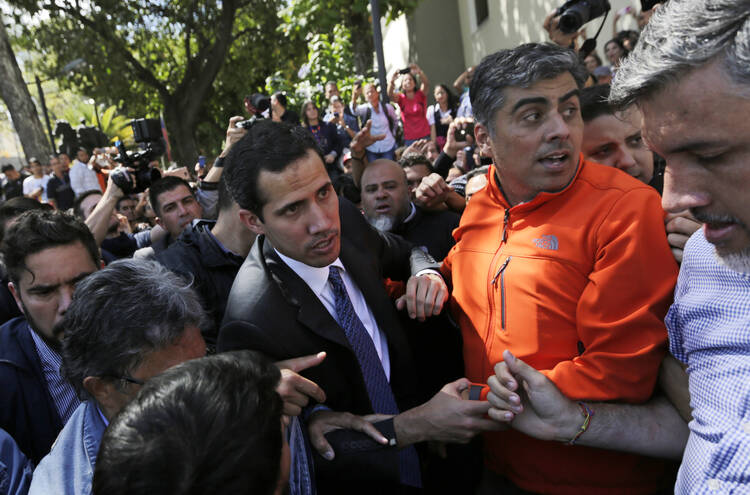 Opposition leader Juan Guaido is surrounded by supporters as he arrives to speak in a public plaza in Caracas, Venezuela, Friday, Jan. 25, 2019. (AP Photo/Fernando Llano)

Cardinal Sean P. O’Malley believes that Venezuela’s interim president, Juan Guaido, “has come up with a formula that could avoid a civil war, could avoid bloodshed” in the country, and he regrets that the country’s military have “not yet” sided with him.

He stated this in an interview in Panama this morning with America and two other news outlets: El Pais (Spain) and Corriere della Sera (Italy).

Asked by America what he made of the dramatic situation that has unfolded in Venezuela as Pope Francis arrived in Panama on Jan. 23 for World Youth Day, the cardinal replied: “I was disappointed this morning to read that the military is not yet on board with the new interim president.” This was a reference to the fact that the head of the military said last evening that his forces support President Nicolas Maduro and not Juan Guaido.

Cardinal O’Malley asked, “If this fails, what is the way forward for Venezuela?”

“Venezuela has been married to corruption and incompetence and the people are suffering so much that it has to be changed,” the cardinal said. “Guaido has come up with a formula that could avoid a civil war, could avoid violence if he could only get more people to support him from the government and from the military. So we’re praying very hard. I worry about his safety.”

Cardinal O’Malley asked, “If this fails, what is the way forward for Venezuela?” He said that “three million people have left [this land]” already, “and people are starving in a country that has more oil than any other country in the world.”

The cardinal said he feels “very close to Venezuela” because “when I was bishop in the Virgin Islands they asked me if I would be bishop in Venezuela...which is a mission of the Capuchins, and I said yes, but afterwards they sent me to Fall River instead.” But, he said, “then I thought I would have been there during Chavez, a gringo bishop would have been an interesting experience.”

“Venezuela is a great country, but people are suffering so much and hopefully this [move by Guaido] can bring [the country] a step forward,” said Cardinal O'Malley.

He repeated, “Venezuela is a great country, but people are suffering so much and hopefully this [move by Guaido] can bring [the country] a step forward.”

When it was put to the cardinal that the Vatican has said little on the situation that has developed so dangerously in these days, except for a brief statement yesterday, Cardinal O’Malley admitted, “certainly, the Vatican has been very cautious.”

The cardinal, who speaks Spanish fluently and is well known in Latin America, explained the rationale for this caution and insisted that the Vatican and the country’s bishops are on the same page: They want the situation to be resolved peacefully, through dialogue.

Cardinal O’Malley affirmed that “they [meaning the Vatican] want to do what the Venezuelan bishops want them to do.” He noted that “they have the advantage of Cardinal Pietro Parolin [the Vatican secretary of state] who was nuncio in Venezuela, and he knows the bishops, he knows the situation there.” He noted that “the one intervention that the Vatican made was not very successful,” referring to its effort to broker a negotiation when it sent a senior diplomat, Archbishop Claudio Maria Celli, to the country more than a year ago.

Cardinal O’Malley emphasized that “the Vatican wants to support whatever the bishops in Venezuela, who are on the ground there, want.” In other words, the Vatican is standing behind them. He recalled in addition to Cardinal Parolin’s experience in Venezuela, Archbishop Peña Parra, the substitute (the third ranking official in the Vatican, often referred to as the chief of staff), is from the country and said “so you have the two top men [after the Latin American pope] who know the situation very well.”

From what I understand the military in Venezuela are under control of Cuba and Hezbollah and Cuba and Teheran are calling the shots. Also Maduro is probably not the most powerful person in Venezuela. That may be Tareck El Aissami who has worked with Iran for years and is Vice President and controls the Intelligence service.

The wonders of socialism!!!