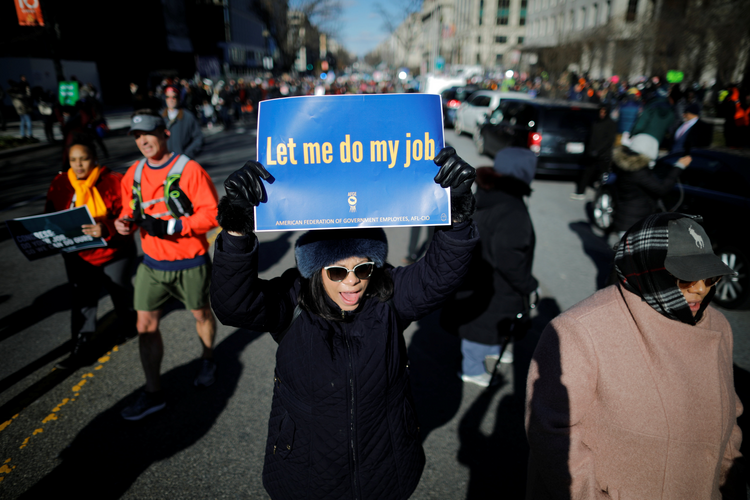 As the nation’s longest partial government shutdown continues, Catholic organizations are responding to the needs of people hardest hit—in particular, federal employees not receiving pay and immigrants increasingly cut off from support systems. The latter group includes many church employees and volunteers.

Catholic Charities branches around the country have responded to the shutdown. Staff at a number of offices say even though the government is closed, they will remain open. “Our food pantries remain open and our experienced managers remain ready to provide services,” Catholic Charities of the Archdiocese of Galveston-Houston said on its website in a statement urging those who need assistance to seek help.

Antonio Fernandez, C.E.O. of Catholic Charities for the Archdiocese of San Antonio, said the office he leads is helping everyone they can during the shutdown, providing food, grocery-store gift cards and rental assistance. “We will just do what we need to do to help people in need,” Mr. Fernandez said.

“We will just do what we need to do to help people in need,” said Antonio Fernandez, C.E.O. of Catholic Charities for the Archdiocese of San Antonio.

On Jan. 16 President Trump signed the Government Employee Fair Treatment Act of 2019 to ensure federal employees would be paid after the government reopens. The law does not include federal contract workers who are also missing paychecks as the shutdown drags on. The United States Department of Agriculture has also said that food stamps, distributed through the Supplemental Nutrition Assistance Program, will be available through February.

T.S.A. employees at airports across the country have been missing paychecks since Jan. 11. The starting salary for full-time T.S.A. agents is $32,855. The website Catholic Philly reported that Catholic Social Services and Nutritional Development Services of the Archdiocese of Philadelphia donated diapers and staple foods to T.S.A. employees at Philadelphia International Airport on Jan. 16.

Miguel Naranjo, director of Religious Immigration Services at the Catholic Legal Immigration Network, represents priests, deacons, women religious, religious brothers and lay Catholics who have come to the United States to do religious work. The federal program that would have allowed non-ministers and their families to get permanent residency expired when the government shut down.

“There is great uncertainty due to the shutdown.”

“We have some folks whose situation is that they are trying to get permanent residency,” said Mr. Naranjo. “They were hoping to get it before the program expired…. The shutdown has complicated things for them quite a bit.”

While the program for permanent citizenship will likely be reinstated when the government reopens, the delay can create difficulties for religious workers who are reaching the end of the five years allowed with their visa. Overstaying a visa can can hinder a person’s chance at permanent residency, Mr. Naranjo explained, but so can leaving the United States.

“Immigration law, unfortunately, can be very complicated,” said Mr. Naranjo. “If someone has a permanent residence application pending and they leave the United States during that process without securing the proper travel documents, their departure can be viewed as an abandonment of their permanent residency application.”

In addition to the Catholic workers facing visa difficulties, the U.S. Conference of Catholic Bishops, one of nine organizations that resettles refugees in the United States, has also been affected by the shutdown. Ashley Feasley, director of policy for Migration and Refugee Services for the U.S.C.C.B., said that affiliated Catholic Charities offices are “operating without formal agreements and instructions from the federal government” because their cooperative agreements with the State Department have not been signed.

Mr. Fernandez and others at Catholic Charities in San Antonio are still working to resettle refugees coming to the United States during the shutdown, but the pace of refugee arrivals has slowed. Mr. Fernandez described the shutdown as “just one more handicap” to providing services for refugees.

In a statement released on Jan. 10, Bishop Joseph Vásquez, the chairman of the U.S.C.C.B.’s Committee on Migration, said, “The president and Congressional leaders need to come together and end the shutdown with a solution that recognizes the dignity of work of affected employees, respects the humanity of all regardless of immigration status, and protects the sanctity of human life.”

According to a report from Syracuse University, 42,726 immigration court hearings had already been cancelled nationwide as of Jan. 11—including 5,320 hearings in New York. “This is very harmful for asylum seekers who have waited years for their day in court and other vulnerable peoples looking to comply with our laws,” said Ms. Feasley.

In addition to courts not hearing cases of nondetained immigrants during the partial shutdown, the future of services for immigrants in detention is uncertain. The Legal Orientation Program is a network of nonprofits that explain immigration court procedures to detained individuals. Catholic entities make up about 40 percent of this network. The program is still operating, but services could cease in February.

“We don’t know if services will continue, and it puts strain on Catholic Charities,” said Ms. Feasley. “There is great uncertainty due to the shutdown.”

Correction: A previous version of this story stated, "T.S.A. employees at airports across the country have not been paid since the government shutdown began on Dec. 22." In fact, most T.S.A. employees missed their first paycheck Jan. 11.

The disagreement is over 2/10 cents of every dollar in the budget. Of course we know it is not over money but two completely different visions of the United States. One that wants the US subservient to foreign entities and another that wants a stronger United States with strong independent partners.