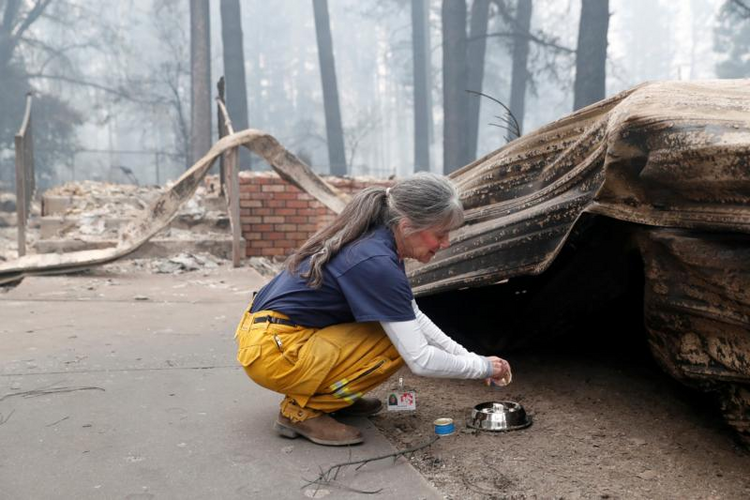 Julie Atwood, a volunteer with the North County Animal Disaster Group, puts out food and water Nov. 13 for a stray cat reported in an area destroyed by the Camp Fire in Paradise, Calif. (CNS photo/Terray Sylvester, Reuters)

SACRAMENTO, Calif. (CNS) -- By midday Nov. 16 firefighters had gained more ground in trying to contain the Camp Fire in Northern California, which is north of Sacramento and one of the deadliest blazes in the state.

The same day in Southern California, more residents displaced by Woolsey Fire near Los Angeles were being allowed to return to their homes. Both fires started Nov. 8, but authorities have not determined the cause.

Fueled by low humidity and strong winds, the Camp Fire has destroyed over 11,000 buildings across over 140,000 acres. The entire population of Paradise, about 30,000, were forced to evacuate Nov. 9; the town was destroyed. The death toll stands at 66 and at least 631 people are missing.

"The tremendous loss from the Camp Fire ravaging parts of the diocese is devastating," said Bishop Jaime Soto of Sacramento. "The families in Paradise and the surrounding communities affected by the fire can rely on the support of our prayers.

"We also pray for the brave men and women responding to this disaster and battling the fires," he added in a statement posted on the diocesan website, www.scd.org. "May all those who have died in this catastrophic inferno be granted eternal repose in the merciful hands of the Lord Jesus."

Bishop Soto was to celebrate Mass Nov. 18 at St. John the Baptist Parish in downtown Chico for all those affected by the Camp Fire. He especially invited the community of St. Thomas More Parish in Paradise; their church was in the direct line of fire.

Los Angeles Archbishop Jose H. Gomez asked all people of faith and goodwill to join him in offering prayers and support for everyone affected by the fires in Southern California.

Many of St. Thomas' parishioners have lost their homes. The Sacramento Diocese has confirmed that church and school buildings have survived the fire. The new rectory, old rectory and parish hall were destroyed.

The Society of St. Vincent de Paul and Northern Valley Catholic Social Service were working with partner organizations on local relief and recovery efforts. Donations can be made through the Sacramento Diocese by visiting www.scd.org/donate (choose the Fire Assistance Fund).

In a Nov. 14 statement, Los Angeles Archbishop Jose H. Gomez asked all people of faith and goodwill to join him in offering prayers and support for everyone affected by the fires in Southern California.

"The devastation of the wildfires continues throughout our state. We need to keep praying for those who have lost their lives and their homes and livelihoods, and for all the men and women fighting the fires," said Archbishop Gomez.

The Archdiocese of Los Angeles has started a fund to help the victims of these fires. Donations can be made at www.archla.org/fires.

"These funds will assist families within our parish communities in their recovery efforts," he said.

The archdiocese of Los Angeles has been providing support to the communities affected by the fires through Catholic Charities of Los Angeles and local parishes and schools.

As of Nov. 16, these are the facts about each of the fires, according to Cal Fire and local officials: