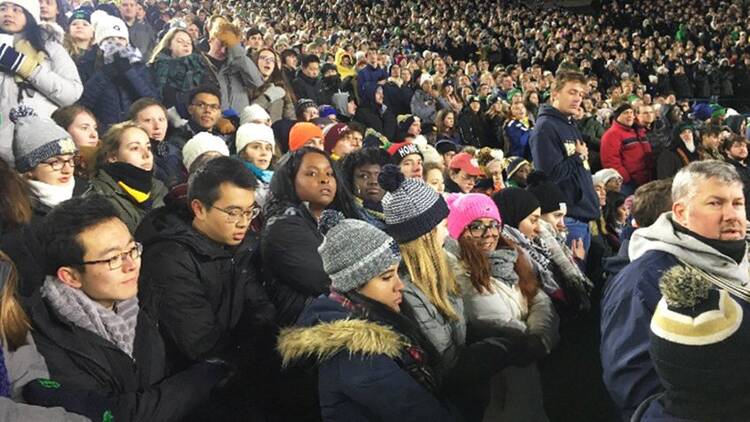 (RNS) — Dozens of students at the University of Notre Dame took a knee during the playing of the national anthem at the Catholic school’s football game in South Bend, Ind., this weekend, saying their faith compels them to protest racism.

As “The Star-Spangled Banner” blared before Notre Dame’s last home game of the season on Saturday (Nov. 10), students in six rows of the school’s football stadium suddenly knelt in unison, joining a movement to protest racism and police brutality that has caused controversy for the past two years across professional and scholastic sports contests. Organizers said they estimated around 90 students participated, although the school newspaper reported at least 60.

According to a statement on a Facebook group page created ahead of the protest, the student organizers said the action was meant to confront a Notre Dame student body that they say has not faced “the reality of systemic racial injustice.”

Organizers told Religion News Service that faith was a key motivator of the protest, noting they intend to hold a panel discussion later this week about racism and their decision to kneel.

“It was designed to encourage ND students to see racial justice as an essential part of their faith, and to rethink who a progressive activist looks like,” said Mary Katherine Hieatt, a junior at Notre Dame and one of the student organizers. “Some of the participants told me that they really responded to our connection to Catholic tradition.”

The students argued their demonstration was in the spirit of Catholic priest and former Notre Dame president the Rev. Theodore Hesburgh, who protested with Martin Luther King Jr. during the civil rights movement of the 1960s. The Facebook group page included an image of Hesburgh and King.

“We will link arms in prayer/solidarity as Fr. Hesburgh and Martin Luther King Jr. did, in the hopes of ​reframing ​​the issue for our peers who have differing beliefs,” the Facebook statement read. “That, rather than being dismissed as ‘just a liberal act,’ many might reconsider how this movement of justice and reconciliation aligns deeply with shared values (among many) of faith, Notre Dame tradition, and Fr. Hesburgh.”

The demonstration came just days before this week’s meeting of the U.S. Conference of Catholic Bishops, where Catholic leaders are expected to issue their first major letter on racism since the civil rights era.

San Francisco 49ers safety Eric Reid wrote in a September 2017 New York Times op-ed that his Christianity moved him to be one of the first players to kneel with Kaepernick.

The students join a number of NFL players, other athletes and entertainers who see kneeling during the anthem as both a protest against police brutality and racism and an expression of their faith. The movement, begun by former San Francisco 49ers quarterback Colin Kaepernick in 2016, has drawn the ire of President Donald Trump and prompted colleges, high schools and NFL team owners to attempt to issue rules about when kneeling will be tolerated.

San Francisco 49ers safety Eric Reid wrote in a September 2017 New York Times op-ed that his Christianity moved him to be one of the first players to kneel with Kaepernick.

“That’s when my faith moved me to take action. I looked to James 2:17, which states, ‘Faith by itself, if it does not have works, is dead,’” Reid wrote. “I knew I needed to stand up for what is right.”

In fact, several NFL players have referenced faith as inspiring their protest against racism and police brutality. Patriots safety Devin McCourty said during a press conference in September 2017 that he and other players planned their anthem protest after attending chapel. And when New Orleans Saints running back Mark Ingram was asked by Sports Illustrated why he sat during the anthem, he said it was because “I’m a Christian,” adding, “when I feel something isn’t right, I just want to bring awareness to it.”

College players have also invoked their faith while kneeling in protest during the anthem. University of Nebraska football player Michael Rose-Ivey said in 2016 he and others knelt during the anthem and prayed as they did so, referencing the Bible and asking God to “look down on this country with grace and mercy.”

An Olympic salute to black power: what it means 50 years later
Michael McKinley

Entertainers have invoked God as well. Jessica Sanchez, made famous by her appearance on “American Idol,” defended her decision to kneel while singing the anthem at a football game by referencing Proverbs 31:8-9 from the Bible: “Speak up for those who cannot speak for themselves, for the rights of all who are destitute.” Country singer Meghan Linsey, who knelt while singing the anthem at an NFL game last year, also referred to Jesus as part of her inspiration.

“Jesus loved everyone and had empathy,” Linsey wrote in a Facebook post. “Our current president knows nothing about empathy, and I can’t believe how many of his ‘supposed’ followers he has brainwashed.”

Trump faith adviser Robert Jeffress has rebuked those who cite their faith while kneeling, reiterating the president’s longstanding critique of the practice.

“Many of these players claim to be strong Christians, and I believe they are,” Jeffress told Fox News in 2017. “And I think they ought to remember what Jesus said — render unto Caesar the things that are Caesar’s, and unto God the things that are God’s. Jesus said we have a responsibility toward our government. We owe our government not just our taxes, but we owe them our respect and our prayers.”

Many Mennonite Christians do not stand during the national anthem or sing it because they disagree with its militaristic language and how it lifts up the nation instead of God.

But other religious Americans also take issue with the national anthem for different reasons. Many Mennonite Christians do not stand during the national anthem or sing it because they disagree with its militaristic language and how it lifts up the nation instead of God. Mennonite colleges, such as Eastern Mennonite University, often do not play the anthem at sporting events.

It’s good to see a reminder, well introduced by America’s staff, that, for many, kneeling so “publicly” and so respectfully is both an act of patriotism *and* an act of staunch Catholicism.
I applaud these Notre Dame students for living our faith a bit louder than the go-along-to-get-along crowd is comfortable with.

Appreciate this article. I live in South Bend and there was no mention of this in our local news media.