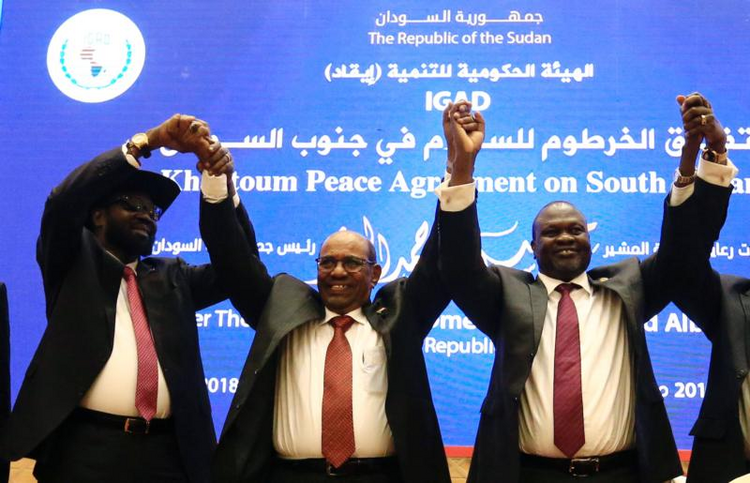 NAIROBI, Kenya (CNS) -- As South Sudanese peace negotiations tackled the last outstanding issues, church leaders called for genuine dialogue, healing and trust building, so that politicians have the will to implement a peace pact.

Talks between President Salva Kiir and rebel leader Riek Machar in Khartoum in neighboring Sudan entered the home stretch with negotiators fine-tuning the final chapter on power-sharing arrangements and governance, according to sources.

A comprehensive agreement was expected to be finalized July 26 after earlier talks yielded a cease-fire. Underway since June, the talks were aimed at ending a civil war that ignited in December 2013 as a dispute between the two senior politicians.

A final agreement has been delayed by a failure of parties to agree on the number of vice presidents, ministers, legislators and states.

As the talks entered the final stretch, Father James Oyet Latansio, general secretary of the South Sudan Council of Churches, said there were fears that the agreement will not be inclusive and may not serve the interests of ordinary citizens.

"We are waiting. We do not have any status in the talks, but we need the peace. People want to see the peace so that they can be comfortable," Father Latansio told Catholic News Service.

Church officials said the humanitarian crisis created by the war has been devastating to civilians. The United Nations has reported that up to 2.4 million children are not in school, nearly 2 million people are internally displaced, and nearly 2.5 million refugees have fled to neighboring countries.

Throughout July, partner organizations have scaling up seed distribution to enable some planting to occur in a move that church officials expect will decrease dependency on food aid.

Without genuine dialogue, healing and substantial trust among the parties, they said, the political will needed to ensure the agreement's success will be lacking, leading to its failure.

Still, as they set sight on yet another peace agreement, Catholic, Orthodox and Protestant leaders said they were concerned about the strong emphasis on technical issues before trust among the parties had been established.

"The parties themselves acknowledged that the entire implementation of the agreement will depend on how trust can be built now and in the long-term," the leaders said in a statement.

Without genuine dialogue, healing and substantial trust among the parties, they said, the political will needed to ensure the agreement's success will be lacking, leading to its failure.

The religious leaders recalled that earlier agreements had been reached but were never fully implemented, leaving the country in despair.

On July 22, the United States warned that it would not back any agreement, fund or call for additional money to support a transitional government that did not demonstrate a commitment to peace, inclusivity, financial accountability and good governance.

"The only hope for success is a process that is widely inclusive of views of South Sudanese people and that engages the civil society, churches, women and other excluded groups," the Sudan Tribune reported a White House spokeswoman as saying.