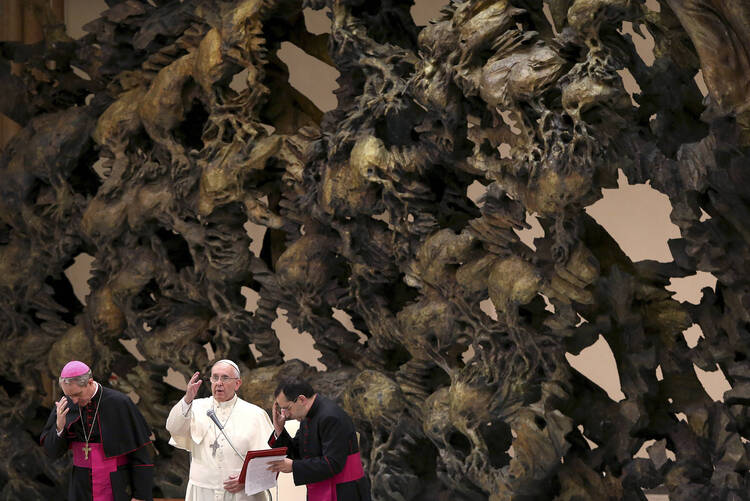 Pope Francis gives a blessing during a special audience with Catholic doctors at the Vatican Nov. 15, 2014 (CNS photo/Alessandro Bianchi, Reuters)

VATICAN CITY (CNS) -- Make medicine and health care more humane by protecting the life and dignity of all patients, particularly the weakest and the unborn, Pope Francis told Catholic doctors and medical specialists.

"The church is for life and her concern is that nothing be against life," no matter the stage of development or how weak or defenseless that life is, Pope Francis said.

The pope met May 28 at the Vatican with a delegation from the World Federation of Catholic Medical Associations. The federation, which represents more than 100,000 health care professionals in about 80 countries, was to host its 25th world congress May 30-June 2 in Zagreb, Croatia.

The defense of the human person "is essential for humanizing medicine," the pope told the delegates, urging them to be active nationally and internationally in their field and even in political debates involving legislation on hot-button ethical issues such as "pregnancy termination, end of life and genetic medicine."

He also encouraged them to remain committed to defending the right of conscientious objection for all health care workers.

"It is not acceptable that your role be reduced to that of being a simple executor of the will of those who are ill or of the demands of the health care system in which you work," he said.

Catholic medical professionals are called to uphold the dignity and centrality of every human person, including all their inalienable rights, with the right to life as the foremost, he said.

The defense of the human person "is essential for humanizing medicine," the pope told the delegates.

Catholic healthcare givers, he said, must oppose "the tendency to debase the sick as a machine to be repaired, without respect for moral principles, and (the tendency) to exploit the weakest, rejecting those who do not fit in with the ideology of efficiency and profit."

Recognizing the federation's fidelity and commitment to applying church teaching and norms in the field of medical ethics, he praised them for cooperating with the church's mission of "promoting and defending human life from conception to its natural end, respecting the weakest" and putting the human person at the center of medical care.

"This fidelity required and requires hardship and difficulties, which, in certain circumstances, can call for a lot of courage," the pope said. "Keep on this path with serenity and determination" and continue to be aware of the moral implications of church teachings in the field of medicine.

"In fact, even the field of medicine and health care has not been spared from the onslaught of the technocratic-cultural paradigm, from the adoration of unlimited human power and from a practical relativism, in which everything that doesn't serve one's own interests becomes irrelevant."

"It is not acceptable that your role be reduced to that of being a simple executor of the will of those who are ill or of the demands of the health care system in which you work," he said.

One's Catholic identity, he said, "does not compromise your collaboration with those who, (operating) from a different religious perspective or from no specific belief, recognize the dignity and excellence of the human person as the criteria of their activity."

To be a Catholic doctor, he said, is to be inspired by one's faith and -- in communion with the church -- to grow and mature in one's profession and Christian faith, seeking to discover and understand natural law so as to better serve life.