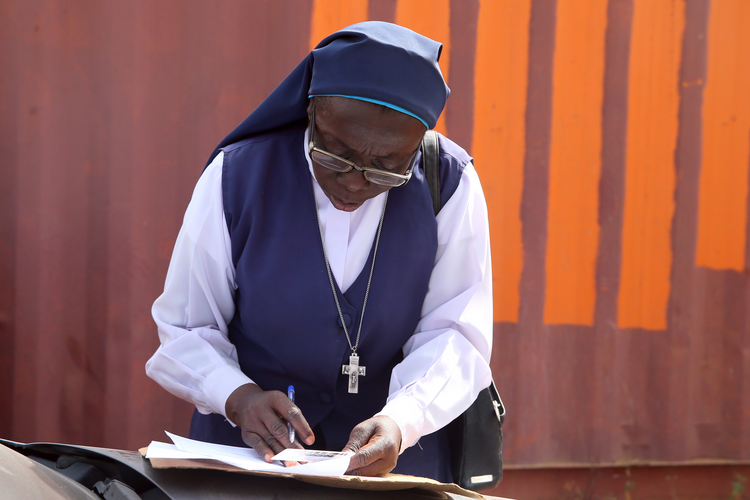 A woman religious fills out a voter registration document on Jan. 31 in Abuja, Nigeria, for the country's 2019 presidential and general election. (CNS photo/Afolabi Sotunde, Reuters)

Just before the end of Sunday Mass in late February at St. Dominic Catholic Church in central Lagos, a female lector took a breather after reading the main announcements. Looking up from the pulpit, she said: “Special announcement from the pastor’s desk. We encourage all parishioners who desire change to begin the process by obtaining their voter’s card…. We must vote to create the kind of change we desire.”

Since the beginning of January, the Catholic Church in Nigeria’s largest city, which has about a population of approximately 21 million, has been emphasizing the importance of voting. General elections in Nigeria will be held in mid-February next year, allowing registered voters the chance to cast a vote for the president and federal parliamentary representatives, as well as for state governors and assemblies.

Nigeria’s Independent National Electoral Commission introduced the new Permanent Voter’s Card before elections in 2015. This biometric card is a prerequisite for casting a ballot.

In February, I.N.E.C. Chairman Mahmood Yakubu said some 7.8 million voter’s cards were yet to be picked up by registered voters. He added that Lagos had the highest number, with 1.4 million unclaimed cards.

“We encourage all parishioners who desire change to begin the process by obtaining their voter’s card. We must vote to create the kind of change we desire.”

“The conduct of credible elections is essential in any democracy, and is at the core of citizens’ democratic rights,” Faeren Mercy Agaigbe, a lecturer in the department of political science at Benue State University in central Nigeria, told America.

The church in Nigeria would appear to agree. Using pastoral letters and circulars with exhortations on civic duty, as well as pulpit and parish bulletin announcements listing registration centers, the church has been educating voters on the importance of exercising their right to vote.

The Catholic Bishops’ Conference of Nigeria has called on citizens to see elections as a “God-given opportunity” to choose their leaders in a “free and fair contest,” while admonishing the electoral body and the government to address inadequate registration facilities and registration irregularities with the “utmost urgency and without discrimination and bias.”

“Elections depend not only on what happens on the morning of [voting] but the entire process before, during and after casting of votes,” the bishops said at the end of their first plenary meeting in Nigeria’s capital of Abuja in February.

The Nigerian church’s nonpartisan voter registration drive does not endorse or attack candidates. Instead the church talks about “defending our faith” and creating “the change we want.”

In a circular printed in parish bulletins in February, the Catholic Bishops of the Lagos Ecclesiastical Province urged the clergy and parishioners “to endeavor to get themselves registered and collect their voter’s cards ahead of the forthcoming elections.”

Citizens no longer have faith in leaders and institutions, leading to growing disenchantment with the political system.

“Nigerians [need to] realize that the power to determine their present and future happiness lies in the votes they cast during elections,” the bishops said. “It is therefore important that we participate actively in the process of choosing our Leaders.” They further charged priests to “sensitize and strongly encourage” their parishioners to exercise their right to vote.

With a minimum voting age of 18 and about 150,000 polling stations across Nigeria’s 36 states, millions of are eligible to vote, but turnout is frequently disappointing. Though Nigeria is Africa's biggest oil producer, political progress has been stalled by decades of corruption and mismanagement. Citizens no longer have faith in leaders and institutions, leading to growing disenchantment with the political system.

Since the end of a military dictatorship in 1999, Nigerians have become used to the idea that incumbents win re-election; people have come to believe their votes do not count. And logistical problems such as technical glitches and long distances from registration centers cause many to give up attempts to obtain their biometric cards.

The historic 2015 presidential election, in which the incumbent Goodluck Jonathan was defeated by General Muhammadu Buhari, Nigeria’s current president, helped citizens realize that they have the power to vote out leaders who did not meet public expectations. That year, a coalition of election observers using cameras and the hashtag #NigeriaDecides flooded social media with photos and videos of voting data while searching for irregularities—a move to deter officials or hoodlums from interfering with the process.

While the election in 2015 was largely seen as free, fair and credible, voter apathy was still widely reported. Only 44 percent of the nearly 70 million eligible voters went to the polls, according to the I.N.E.C.

Elections in 2003, 2007 and 2011 were marred by allegations of organized vote-rigging and fraud, and violent attacks by unknown gunmen or political thugs scared voters away from polling stations. Around 800 people were killed in post-election violence in 2011.

“A political culture characterized by violence, intimidation, manipulation and deception is reflected in the electorate’s shunning the ballot,” said Mrs. Agaigbe.

This is where the church has stepped in. Catholic social teaching underscores the importance of civic responsibility and active citizenship. Article 2240 of the Catechism of the Catholic Church states that it is “morally obligatory” to “exercise the right to vote.”

Young Nigerians are connecting with Pentecostal churches. Will they return to Catholicism?
Linus Unah

Christians are deeply attached to their places of worship, making the church an ideal ground to promote civic responsibility. Other Christian denominations, including gospel evangelists preaching in crowded motor parks, and faith-based organizations are also taking on the task of urging people to get their biometric cards.

“For any political process—I don’t think it’s peculiar to us in Africa—faith spaces have been very useful because of the moral authority of the teachers themselves, and the fact that our patriotism has to draw inspiration from moral convictions,” Bishop Mathew Hassan Kukah of the Catholic Diocese of Sokoto wrote in the April edition of the Paris-based monthly magazine The Africa Report.

Even in WhatsApp groups, Christians are sending messages to encourage one another to get ready for the elections, part of a wider call to overcome apathy.

“Hearing the priest charge us to go and get our voter’s card made me uncomfortable, and I just couldn’t stay away from voting again,” said St. Dominic parishioner Ugo Omu, a mother of two.

Ezichi Ogbu, 20, did not vote during Nigeria’s general elections in 2015 because she had no voter’s card. But last month Ms. Ogbu, a journalism senior at the University of Nigeria, decided to visit the local council and register with officials of the electoral management body to be eligible to vote next year.

“I registered to vote in the forthcoming elections because it’s my right and a civic duty, too,” Ms. Ogbu said. “My vote is my voice.” 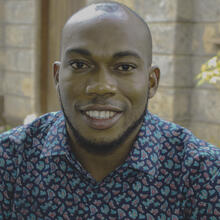 Linus Unah is a freelance journalist based in Lagos, Nigeria.