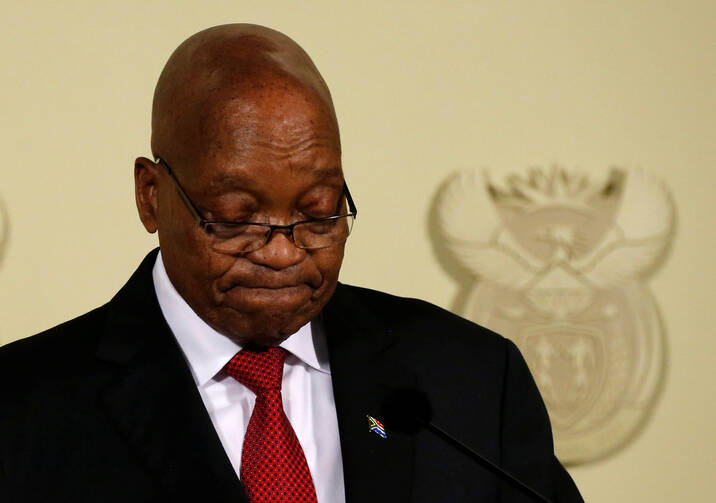 “Let the prosecution go ahead,” the chair of the Southern African Catholic Bishops’ Conference Justice and Peace Commission, Bishop Abel Gabuza, said when he heard that former South African President Jacob Zuma was issued with a summons to appear in court. Mr. Zuma has been charged with corruption, fraud and racketeering.

The charges relate to 783 questionable payments Mr. Zuma allegedly received in a controversial multibillion-rand arms deal. Many hope this possible prosecution will mean a step forward on a continent where all too often corrupt leaders are not held to account for their actions.

The director of the Catholic Bishops’ Parliamentary Liaison Office, Father Peter-John Pearson, said that the decision to charge Mr. Zuma was a critical one that showed nobody in South Africa is above the law. “It puts a definitive end to the ever-creeping culture of lack of accountability, especially from political elites. It emphasizes that such behavior is totally unacceptable and entirely contrary to the political culture which so many fought for in South Africa,” he said.

“It puts a definitive end to the ever-creeping culture of lack of accountability, especially from political elites.”

Mr. Zuma was forced to resign by his party, the ruling African National Congress, last month. The so-called arms-deal scandal and his involvement in it has plagued Mr. Zuma since the late 1990s. For more than a decade Mr. Zuma has tried to head off charges that have hung over his head, and he has repeatedly delayed legal proceedings against him.

Bishop Gabuza said that he welcomed the “highly probable prospect” of Mr. Zuma getting his day in court. Though “we do have the experience of him delaying things and making it impossible for things to happen,” the bishop said.

The 75-year-old former president denies the allegations and maintains his innocence despite mounting evidence to the contrary. The bishop found the entire situation lamentable. “Mr. Zuma contributed to the struggle for liberation in this country,” he said, “only to spoil his contribution by selfish acts of corruption and seeking to enrich himself and his cronies.”

Archbishop William Slattery of Pretoria, spokesperson for the S.A.C.B.C., said, “Though it is very late in the day, it is very hopeful that the wheels of justice are still turning in South Africa. The fact that the former state president will now have his day in court to answer before the nation for his decisions while in power will certainly send a well-needed clanging alarm call to many departments and offices of political administration.”

Mr. Zuma’s lawyer, Michael Hulley, confirmed that he has received a summons for Mr. Zuma to appear in the east coast city of Durban on April 6. Earlier in March the head of South Africa’s National Prosecuting Authority, Shaun Abrahams, announced that the authority intended to charge Mr. Zuma.

Bishop Slattery: The summons “will certainly send a well-needed clanging alarm call to many departments and offices of political administration.”

The former head of the N.P.A., Mokotedi Mpshe, had previously dropped the charges brought against Mr. Zuma after his legal team insisted that they were politically motivated.

Mr. Zuma was deputy president at the time the arms deal took place. His friend and former financial adviser Schabir Shaik was found guilty and jailed in 2005 for trying to solicit bribes from a French arms company.

In his judgment, Judge Hilary Squires charged that Mr. Shaik had made payments to Mr. Zuma. He suggested that this showed a “mutual beneficial symbiosis” between Mr. Shaik and Mr. Zuma and that the payments “generated a sense of obligation in the recipient.”

Mr. Shaik was sentenced to 15 years imprisonment on two counts of corruption as well as three years on one count of fraud. His appeal to the South African Supreme Court failed. Thereafter he went to the country’s highest court, the Constitutional Court, which upheld the conviction of fraud and corruption. After the ruling, then-President Thabo Mbeki dismissed Mr. Zuma as deputy president.

In March 2009 Mr. Shaik was released on medical parole. He had only served two years and four months of his 15-year jail term. He claimed then that he was suffering from a terminal illness.

This, too, has been questioned as Mr. Shaik has continued to play golf and appear at social events since his release. Many South Africans believe that Mr. Zuma engineered his friend’s early release after he became A.N.C. party president in December 2007. Shortly after that, he and the leadership of the A.N.C. removed Mr. Mbeki from his post as president.

A new president may not mean a totally fresh start for South Africa
Russell Pollitt, S.J.

A High Court of South Africa ruling in April 2016 stated that the charges against Jacob Zuma should be reinstated. Mr. Zuma appealed the court ruling. However, Supreme Court Judge Lorimer Leach said that it was irrational for the N.P.A. to have set the charges aside and in so doing upheld the ruling made by the High Court. This left the N.P.A. with the decision to reinstate the charges relating to the arms deal.

Father Pearson said that the decision to put Mr. Zuma on trial is “one step in reversing this shameful period in our history.” He went on to say that the decision showed quite unambiguously that “there is no room for a culture of impunity” in South Africa.

Earlier this week, after a national executive meeting of the A.N.C., the party announced that it would not support the former president in his upcoming trial. They said that party members were free to support Mr. Zuma, but that they may not wear party insignia or emblems in demonstrations of that support.

At a press briefing after the national executive meeting, A.N.C. Secretary General Ace Magashule assured South Africans that corruption was on the party executive committee’s agenda. He did, however, still insist when talking about the Zuma trial, that “allegations are allegations.”

He also said that a person in South Africa is presumed innocent until proven guilty.

Father Pearson believes that the move to charge Mr. Zuma is a “salutary reminder to those who still harbor such criminal ambitions, that people of decency in the country are saying: ‘Never again.’ Mr. Zuma’s going on trial is a public commitment to rooting out that culture.” Archbishop Slattery echoed these sentiments and said that he hopes these events would jolt other government officials to an “examination of conscience.”